My mom loved to cook. Her sister loved to bake. Fortunately for us, her sister lived about 5 minutes away. I remember answering the door one time, and there stood my aunt Janno with a steaming hot apple pie in her hands and a big smile on her face. She said "Hi" as she walked briskly into the kitchen, and put the pie on the window sill to cool. "Now don't eat any until it cools a bit," and out the front door she went, vanishing as quickly as she had entered. My nose led me back to the kitchen, and I stood there watching the steam come through the holes in the top crust. How long is "a bit?"

Aunt Janno taught me to bake. She taught me to make frosting, mix muffins and make cakes, rugelah and blintzes. I loved spending time with her in her wonderful kitchen, with an old fashioned cream colored enamel stove with the warming drawers up above and the metal and enamel handles to turn on the burners. No matter what we were baking that day, she always had the ingredients, and I always left with something that smelled wonderful, even if my version of it was a little imperfect. Well, sometimes a LOT imperfect!

But as I grew up, I followed more in my mother's footsteps. My older sister Leah had a gift for cooking as well, and it seemed natural for me to learn which herbs and spices went with which meats and sauces. Years later, when I moved to New Mexico, my husband Bob did most of the cooking, and I learned even more than I had at home. I learned the concepts of cooking, which freed me from reliance on particular ingredients and particular recipes.

The one thing that was almost impossible to get in New Mexico - as far as I was concerned - was really good bread. None of the local bakeries produced anything I was interested in. I was used to bread with a crust, and that was absent in the local stores. One day a friend of mine gave me a sour dough starter and a recipe for 100% whole wheat sour dough bread. The recipe called for mixing this starter with some flour and water and then stuffing it deep into a 5 pound bag of flour and letting it sit for several days. When ready to use, the starter was divided, placed in the refrigerator, and the bread was to be made not with the flour it had been sitting in, but with freshly ground wheat berries. Fortunately, I had found a health food store that sold wheat berries and would grind them for you. I must admit that the bread I made in those days was, unequivocally, the best bread I have ever eaten in my life!

That was then. Now I live in San Diego, within walking distance of a fabulous bakery. I can get many, many varieties of crusty breads, and so I no longer bake bread. Except that the last time I went to New Mexico, I visited one of my favorite restaurants - Rancho de Chimayo - just north of Santa Fe. I didn't actually eat there, as I had lunch with a friend in Santa Fe instead. But after lunch I drove up to Chimayo just to visit the restaurant, and because they also sell gifts there. 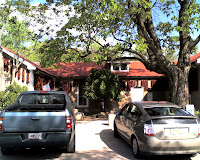 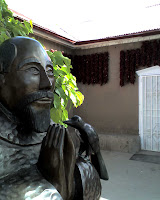 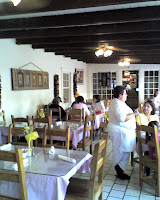 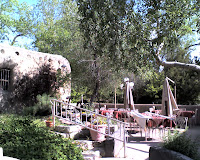 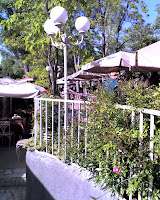 The mix is, well, a mix. So you add an egg, some milk and some oil. Do we need instructions for this? But what I was unprepared for was the color of the bread - red. That, plus the flavor. Not really too spicy (unless you don't like spicy). The cheese flavor didn't really come through, but there was a hint of sweet, which was the perfect balance to the spicy. The other surprise was that this was a moist bread, rather than something dry, which is what I was expecting.

Served warm with butter, it turned out to be the perfect accompaniment to the spinach/parsley omlette with bacon which I served to my guest this weekend, which we ate out on my deck.

For health news, visit Mission Valley Acupuncture
For a place to share what natural remedies work for you and which don't, visit Second Opinion
Posted by Toni at 12:47 PM

oh that sounds so delicious! I've had chile bread before, but it was with green chiles.

I love the pie memory. Pies are so evocative...

I love buying chiles and chile powders from the woman who has a stand right in Chimayo, but I've never tried baking bread with it. That would be fun!

Ann - I've also eaten it with green chilis, never with red before. The color is incredible!

Lydia - I'm not familiar with a chili stand in Chimayo, but maybe I missed it because I was focused on getting to the restaurant!

Oh gosh, this sounds sooooo gooooood!!!!! Never had it before & never heard of it, but I bet it's absolutely irresistible & delicious!

valentina - i managed to polish off almost the entire thing by myself!

rachael - we should take a trip to new mexico together sometime!

It was extremely interesting for me to read the blog. Thanx for it. I like such themes and everything that is connected to this matter. I would like to read a bit more soon.