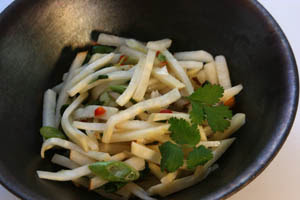 We had flip-flop weather 3 days ago. Seriously. It was summer for about 24 hours, then we went back to our version of winter - rain. And yes, it makes it much colder - er - cooler. I was going to do a take-off on Terry B's beef stew over at Blue Kitchen, but then it turned hot again, and I was suddenly overcome with visions of summer eats - fruit and smoothies and yes, even coleslaw. It didn't seem too far off the mark, what with the fact that my patients were coming in with tee shirts and large water bottles and sleeveless attire. Hell, I was even considering hot dogs! (After reading Lisa's recipe over at Homesick Texan, I wish I had!)

But it's still Chinese New Year. So I decided I'd try something a little different. After all, this is the year of the Rat, and apparently that means we're supposed to try things that are different. Not really a chore for this Aquarian. Different? Where do I sign up??

Not too long ago, I was reading posts from people who were turning out intriguing dishes using celery root. Rachael over at Fresh Approach Cooking posted this delightful recipe, and there were a few others whose posts inspired me to try this odd looking root. Actually, I had never even noticed celery root before that. Or if I had, I didn't know what I was looking at. And frankly, it's not the kind of thing that would inspire me by it's looks. It looks waaay too.....complicated. Kind of like Jerusalem artichokes. They're not quite as layered and gnarled, but still, they're no fun to peel. So I bought one of these complicated gnarley things, brought it home and tried to figure out what to do with it.

Celery root is a particular kind of celery grown for it's root rather than it's stalk. It turns out to be a good source of dietary fiber, Vitamin B6, Vitamin C, Magnesium, Potassium and phosphorous. Because it's a vegetable, it contains no cholesterol. It also happens to be good if you want to lose weight, as it has no fat, has a nice water content so it can fill you up with practically no calories - only 42 of them per cup, in fact.

Now, I don't have a clue what happened next. I could have sworn I turned to epicurious and found a recipe that called for celery root and green apple to make a slaw, using apple cider vinegar. I'm sure I found that recipe somewhere, because I went out and bought a granny smith apple and apple cider vinegar. There was a reason for that, and it wasn't just my imagination. But to this day I cannot find that recipe. Instead, I found this other one, which called for Asian pears. How did they know that they were going to be on sale? 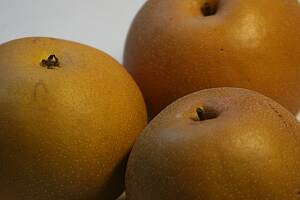 Peel strings from celery with a Y-shaped vegetable peeler and cut celery into 1/4-inch-thick matchsticks.

Whisk together juice, vinegar, and ginger and stir in celery and remaining ingredients with salt and pepper to taste. Let stand at room temperature 15 minutes before serving. 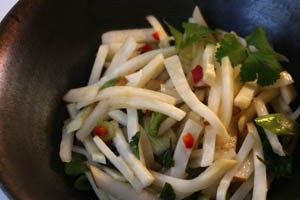 I hate to toot my own horn, but this was terrific! Just the right bite coupled with the smoothness of the Asian pears. But I still had about half the celery root left over, already cut into matchsticks. And then there was that green apple. And the cider vinegar. And no recipe. So what's a gal to do but wing it?

I combined the celery root with the green apple and some carrots - all cut into matchstick pieces. Mixed some cider vinegar, sugar, a little dijon mustard and some salt, and adjusted them to taste. I wasn't in the mood for a mayonnaise based slaw, so I opted to leave it out. I suspect it would have worked OK with the ingredients if that's more to your taste. A little chopped parsley thrown in for color, and because I didn't want it to go bad in the fridge. Now I'm left with the question: Which one do I prefer? I honestly can't say. Perhaps if you decide to try these, you'll let me know your favorite? 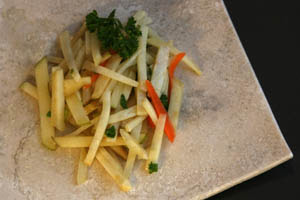 This is my entry for Weekend Herb Blogging, being hosted this month by Erin over at The Skinny Gourmet.

For health news, visit Mission Valley Acupuncture
For a place to share what natural remedies work for you and which don't, visit Second Opinion

Auntie T - You make me SMILE.

I wonder if you could try jicama in this recipe -- it has the same crunchy quality as the Asian pear and celery root.

I'm jealous of your warm weather!
This slaw sounds delicious.
Doesn't slaw seem to be trendier than ever?

Lydia - I'll bet jicama would be great in this!

Emiline - I guess slaw is trendier these days - especially these different takes on it. Enjoy your winter - it means you get the rush of spring!

I've just chanced upon your lovely blog and must say I really like it!!!

It's so inspiring to know how many people (me including :) ) feature summer in their latest posts. It's a good sign, isn't it? ;)

That slaw looks gorgeous. I love a good alternative slaw. Who the heck says cabbage is the end-all and be-all of slaw? Pfooey! I say to that. Kohlrabi makes a nice slaw, too.

Anya - Yes, it's a good sign indeed. Thanks for stopping by my blog, and welcome!

Heather - Phooey indeed! Kohlrabi? Never thought of it, but I like it. How about kohlrabi and jicama?

I think jicama and kohlrabi is a little too white-on-white, plus they kinda taste the same. I bet the Asian pear would go with the kohlrabi. I used arugula and golden raisins in the kohlrabi slaw I made, and it was pretty decent.

Wow, that sounds really good and refreshing! I know how you feel about this summer, not summer, summer not summer thing! We spent the weekend at the beach sipping smoothies and then last night it was freezing! Just make up your mind, weather!!!!

the slaw sounds so refreshing ! What a lovely contrast with the the sweetness of the pears and the punch of the red hot chilli. Love it !

Looks lovely and there's part of a jicama waiting. But I'm wondering about the comment on parsley? What new benefit does it have?

Sounds delightful! Especially since we're having a similar 24 hours of nice weather which is supposed to go away tomorrow. How I wish I had some celery root and asian apples now...I might just save this recipe for the next time this kind of weather comes around (hopefully it's not July!!).

This looks beautifully refreshing and light. I am not a fan of the saucey slaws. This looks like my type of slaw. Yum! Thanks!

Heather - Arugala and raisins in a slaw sounds heavenly! Just the right contrast in flavors.

Jenn - Well, we're back to cloudy and storms heading our way.

Kate - Thanks! You're absolutely right about that combo - it's a winner!

Susan - I'm not sure what comment you mean. I wrote that I threw it in for color and because I didn't want it to go bad in the fridge. Am I missing something?

Michelle - Well, I'm glad I made it when I did. Our warm weather is gone!

This fresh, creative dish is sure to win! Good luck! BTW- We've tagged you! For more details, check out:
http://whiteonricecouple.com/blog

Oooh! Delicious! What a nice combination of flavors Toni! I knew you were a genius.

I am aware of celery root, but have also never worked with it and am not really sure that I'd know how. Glad to see it worked out for you--the slaw looks interesting and tasty!

I think it sounds just wonderful and that you should definitely toot your own horn! Yummy. (I'm also very jealous of your warm weather. I can't remember the last time I left the house without a big coat, let alone short sleeves.)

Mike - Good to know I'm not the last person on earth that hadn't worked with celery root! You might as well try it - at least once!

Kalyn - Oh yes, this is very South Beach friendly! But it's a little too cooling for your weather right now. Stay warm. Wait for spring. Eat slaw. ;-)

Hey Toni,
Our weather has been a bit strange too - right now it's hot & humid, a few days ago, cold & wet.

This dish looks so refreshing. I wonder how long it will keep for in the fridge. I try to make foods that can also be good leftovers for lunch the next day because I am so short of time these days.

Nora - Mine kept in the fridge for about 4 days. It might have kept longer, but it was gone by then!

Thanks, V - It was! Your oatmeal chocolate chip cookies would be a perfect follow-up!!!

i love this!! this is perfect with anything grilled...

Dhanggit - You are so right on about that!

So elegant, from the recipe to the photos to the prose. Toni, this is just wonderful!

I see Asian pears in my market (much more often than celeriac), but I never know what to do with them. This recipe has the fresh and lively flavors I really love in a slaw.

This sounds like a lovely light and delicious dish! Thanks for sharing and for stopping by my blog. :)