Veggie Paella after an exhausting week 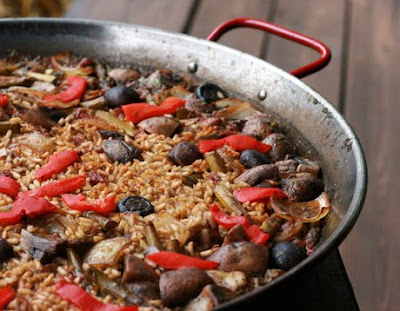 Shhh....I stole this photo from Lydia over at Perfect Pantry.

Let's face it, last week was exhausting! I've made it a point not to get political in this blog, but this time I can't help it. No matter what your political persuasion, this election season has been a time of tension. Personally, I couldn't allow myself to trust the polls. I've seen the polls be wrong before, and I didn't dare allow myself to be lulled into a false sense of security.

But then last Tuesday night, a miracle happened. Americans, old and young, Republicans, Democrats and Independents from every corner of this country, cast their ballots and voted for change. I had patients who told me that they were registered Republicans who could not, in good conscience, vote for McCain and Palin. I have a dear friend who has always been a registered Republican, who told me that he liked Obama and had voted for him.

The collective sigh of relief was heard not only in this country, but could be heard around the world. And once again, the world looks upon our country as the miraculous place it is. Not just because we voted for an African-American, which was miracle enough for people, but also because of the way the transition is taking place. We've heard stories of people in other countries who are amazed at the incredibly gracious concession speech made by McCain on election night. I've heard audio clips of people suggesting that their countries could learn something from that.

And on and on it goes. Life does not seem to have returned to "normal" yet, but the tension is gone. I look around my house and realize that so much has been put on "hold". I spent a few hours today poring over paperwork, throwing out old envelopes with "soy milk, eggs, cereal, onions, pork chops" scribbled on the back. I emailed people I've been meaning to get back to and phoned the neighbor regarding tree trimming. I can't stop smiling.

So when I saw this post over at Lydia's Perfect Pantry, I decided it was time to treat myself to something festive. Oh, how I love paella! I had never seen a vegetarian version of it before, but it looked so good in that photo that I had to restrain myself from trying to stab the computer screen with a fork. And don't you just WANT that pan??? Puh-leeez! (Actually, you can post a comment on her blog to be entered to win it!)

Now here's the thing: She says you can use bomba, Valencia or Arborio rice. I couldn't find bomba or Valencia rice, but I had Arborio rice, so I opted for that. It's not that it was a mistake, exactly, but I can tell you that if you decide to use it, reduce the amount of liquid in the recipe. It tastes good, but it turned out a little too gluey for me. And as for the number of servings? HAH! is all I can say! Serves 6-8??? You could serve the Turkish army with this dish!! And I mean as a main course - not as a side dish! So far I've brought it to a pot luck with 9 people, all of whom loved it, and I brought some over to my neighbor's house this evening and three of us ate it for dinner. And she got the leftovers, and I have another pan of it in the fridge!

Oh, and the reason I stole Lydia's photo? Because none of mine turned out. I don't know why, but they didn't. I think I was still in a post-election fog of euphoria. So rather than post this recipe photo-less, I opted to grab a great photo and use it.

Inspired by Paella! Spectacular Rice Dishes of Spain, this vegan recipe is a dramatic centerpiece to a meatless meal. Serves 6-8.

In a mortar or miniprocessor, mash to a paste the saffron, 1/4 tsp salt, parsley, garlic and smoked paprika. Heat the broth in a large pot over the lowest heat.

Heat the oil in a 17-18 inch paella pan, or in a shallow casserole of similar size, over 2 burners if necessary. Saute the asparagus and onions over medium heat until softened, then add artichoke hearts and mushrooms, and cook 1-2 minutes more. Add the mushrooms and tomato, and cook 1-2 minutes. Pour in the wine, and boil away most of the liquid, then stir in the rice and coat well with the pan mixture. Pour in the hot broth and bring to a boil. Add the mashed saffron-parsley-garlic paste, taste for salt (it will likely need a bit), and continue to boil, stirring and rotating the pan occasionally, until the rice is no longer soupy and sufficient liquid remains to continue cooking the rice, about 5 minutes. Arrange red pepper strips like the spokes of a wheel, on top of the rice.

I've never thought to make a vegetarian paella. This is very interesting! As long as it's spicy and rice-y, it's alright in my book. :)

I'm so glad you tried the recipe -- and one 17-inch pan fed our family of 5 with two lunch's worth left over, so we are definitely a hungrier crowd! As to the liquid, I can't imagine why you had so much -- I followed the proportions Penelope Casas uses in the book, and it works out well, 3 rice to 6 water. Arborio is a rice most of us always have in the house, so it's a good (but not perfect) substitute. I hope you'll make this again some time, and let me know the results. I always need to have vegetarian/vegan main dishes in my repertoire.

Heather - you can make this as spicy as you'd like by adding some chilis. In fact, I considered it, but since I was bringing it to a pot luck, I decided to cool my jets.

Lydia - I don't know why, either, except that maybe the bomba rice can absorb a lot more liquid than the arborio? It's the only thing I can think of. But it doesn't stop me from loving the dish! (And hoping for the pan!!)

I've got a confession to make; have never tried paella. Yet. And now as I've read your post I'm forced to think: 'what am I doing with my life if I don't know the joys of paella?' Something to be fixed. Urgently.

I was confused to see that photo -- did I really come to dbj? Thanks for the further adventures of this paella, Toni. I had a veg paella in a respected Spanish restaurant and it was very disappointing...I'm expecting great things from this one, as well as great quantities.

Anya - Wow, wish I could be there with you when you take your first bite!

Susan - I don't think this one will disappoint - It's delicious! Feel free to tinker, of course...It lends itself to tinkering.

Toni, if there is post-election euphoria everywhere, Chicago is its epicenter. Just wearing an Obama button incites smiling conversations with strangers on the street, at the grocery store... The guy at the seafood counter of one store I frequent beamed as he told me he'd seen me on TV on election night; I'd been at Grant Park. I don't know if you saw it, but Garrison Keillor had a wonderful piece on the high the whole world seems to be feeling, "Sitting on top of the world". Just passing this along to you now, I can't help but smile.

Terry - Thanks so much for the link! I'm grinning now, too. And every time I see photos of him and his family, I just smile...Sigh.....

I've never had paella! Though I want it. I've heard that the crispy rice parts are the best.

Gobama! Very pleased with the results.

Emily - You're in for a treat!

I've made my own version of this several times. Love that distinctive crust on the bottom. It's great to serve for a dinner party and not really difficult, a pilaf, really. I have easy enough access to Bomba; if you like, I can send you some. Just email me.

This is a fantastic recipe. Thanks Toni and Lydia!

Susan - I always love the crusty bottom of rice! I'll search around for some bomba and if I can't find it, you'll hear from me!

Susan - Thanks! Welcome back - it's good to see you again!

Oh, yum, Toni making a Lydia recipe! Two favorites and one paella: Another reason to celebrate a remarkable time in our lives.

Mimi - I've found so many great recipes in the food blogging world that I actually DO make! And this one just spoke to me...

This Paella looks great I may try this on veg night

I too was very stressed out about this election. more so then I knew until the next day when it felt like the world had been lifted off of me.

Darn! and I was going to tell you how much I love your pan. I like the idea of a veg paella.

Shayne - I know exactly what you mean. I felt like I was breathing for the first time in at least a month!

Cynthia - I WISH it was my pan! And speaking of which, I might have to bring your pans with me to New Mexico for my New Year's posole!