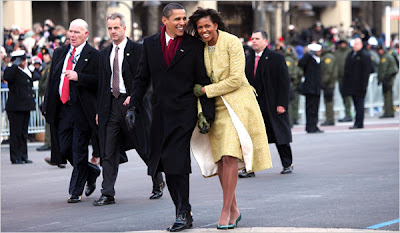 To call it "historic" is a cliche. But it's historic. I know that personally, I feel that for the first time in decades, I can say that I am proud to be an American. A friend of mine wrote to me the day before the election, and this is what he said:

A lot is made of the fact that Obama is black. But, if there was ever a man who is not defined by race, ethnicity, nationality or any other labels it is Obama. On the one hand, he is a man entirely unto himself. On the other hand, I can think of no man who more represents the entirety of Humanity. We should be thankful, not just because of the historical significance of a “black man” becoming president. We should be thankful to be witness to what will become of one of the great men of history calmly stepping up to the enormous challenges of his time. I truly believe that this is a man who, in the annals of history, will stand shoulder to shoulder with Lincoln, FDR and Winston Churchill. I don’t remember which cabinet member it was who stood at Lincoln’s deathbed and said, “Now, he belongs to the ages.” But, the same will be said about Obama. Around the world, the poor, the disenfranchised, the minorities deprived of full human rights, Africans, Asians, Europeans, Latinos, any people in any land who are denied hope are saying “Yes we can. Yes we can! ” He hasn’t even taken the oath of office, and already he is affecting the world. I read a news piece this morning that anonymous sources in the Israeli government told members of the press that they wanted to be out of Gaza before Obama’s inauguration. Yes, he belongs to the ages, and the age that claims him as its own, will be in large part defined by him.

I don’t know how I will feel about the US in the future, but I do feel that at least it now has possibilities. Time will tell if it has the ability to seize those possibilities and transform them into reality. But one thing is certain. The man who takes the oath of office for President of The United States tomorrow is not just the best of the candidates who ran for that office. He is the one man in the world that that office needs right now.

And that poem? I felt that it captured the feelings of the moment.

Praise song for the day. by Elizabeth Alexander

Each day we go about our business, walking past each other,
catching each others' eyes or not,
about to speak or speaking.
All about us is noise.
All about us is noise and bramble, thorn and din,
each one of our ancestors on our tongues.
Someone is stitching up a hem,
darning a hole in a uniform, patching a tire,
repairing the things in need of repair.

Someone is trying to make music somewhere
with a pair of wooden spoons on an oil drum
with cello, boom box, harmonica, voice.

A woman and her son wait for the bus.

A farmer considers the changing sky;
A teacher says, "Take out your pencils. Begin."

We encounter each other in words,
words spiny or smooth, whispered or declaimed;
words to consider, reconsider.

We cross dirt roads and highways that mark the will of someone
and then others who said,
"I need to see what's on the other side;
I know there's something better down the road."

We need to find a place where we are safe;
We walk into that which we cannot yet see.

Say it plain, that many have died for this day.
Sing the names of the dead who brought us here,
who laid the train tracks, raised the bridges,
picked the cotton and the lettuce,
built brick by brick the glittering edifices they would then keep clean and work inside of.

Some live by "Love thy neighbor as thy self."

Others by first do no harm, or take no more than you need.

What if the mightiest word is love,
love beyond marital, filial, national.
Love that casts a widening pool of light.
Love with no need to preempt grievance.

In today's sharp sparkle, this winter air, anything can be made, any sentence begun.

On the brink, on the brim, on the cusp -- praise song for walking forward in that light.
Posted by Toni at 10:41 AM

Thanks for this!
We don't have TV in our rental house, and I haven't been up to wading through all the stuff on the internet so this was a great view of the whole thing for me.

Oh, Katie, it was truly a glorious day! I'm glad you liked this post.

Congrats on your new President.

Oh Cynthia, it's the first time since Kennedy that I've felt proud to be an American. I just can't wipe the smile off my face!!!!!