A Pillow at the end of the day 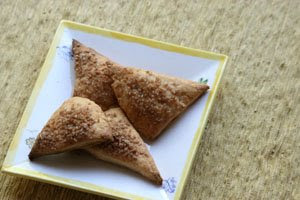 I don't belong to a gym. I find treadmills about as interesting as a box of rocks. You can walk or run for 20 minutes or more and the scenery never changes. Why would I want to do that? Boring!

I have patients who come to me wanting to lose weight, and they are listening for advice on their diets: eat this. Don't eat that. I disappoint them. I tell them to stop focusing as much on what they eat and start focusing on how much they move. I tell them that the biggest cause of their weight problem is petroleum. They look at me as if I was nuts, until I explain that to get into a $35,000 car and move it 6 blocks to buy a $3 loaf of bread is nuts. Europeans understand this principle, as gas there has been expensive for many, many years. Americans love the gym with the valet parking.

But when you think back to when you were a kid, your mom probably had to drag you inside in the evening to eat dinner. You were outside playing, and didn't really feel like stopping to eat. At least, that's the way it was for me. As adults, though, we don't think about playing as much as we think about exercising, and when we think about exercising, we get depressed. So I tell my patients not to use the word "exercise", and replace it, instead, with the word "play". I tell them to find something they love to do which gets them moving - something that might be called "play". They usually like that idea. Furthermore, for the ones who actually DO it, they find that they can eat more of what they like and still watch the pounds come off.

In my neighborhood, I'm known as "the walker". I walk to the grocery store carrying my cotton bags. On the way back, I use them as weights - lifting and lowering them as I walk. I'm getting my aerobic exercise and working out with weights at the same time. And as a side benefit, I'm getting fresh air and getting to know all the stores in the neighborhood. I'm also a crazy gardener. I chop away at weeds with my hoe and crawl under bushes to pull them out. I haul bags of mulch and carry off piles of clippings. At the end of the day I'm physically exhausted and happy. I'm also ready for some food - and sometimes even some dessert.

Since I don't eat many sweets, I look for desserts that aren't over-the-top with sugar. I was cleaning up the kitchen a couple of weeks ago and came across a Food and Wine magazine from March of 1998. Perfect excuse to sit down and read for a bit! And then I came across an article on a family of chefs from Gascony. The youngest family member is Anne Daguin who, with her husband bought a bakery in Saint-Remy-de-Provence called Le Petit Duc. Anne apparently gets her inspiration from old cookbooks and manuscripts. She found this puffy tea pastry from the recipe book of Marie Gachet, whose father was Vincent Van Gogh's friend and physician. I found myself unable to stop eating them!

1. In a medium bowl, stir the flour into the marscapone. Turn the dough onto a work surface and knead just until it is smooth. Pat the dough into a 6" square, transfer to a plate, cover and refrigerate until cold: 30 minutes to 1 hr.

2. Preheat the oven to 450. On a lightly floured surface, roll out the dough to a 15 by 12 inch rectangle. Wrap the dough around a rolling pin and unroll onto a large baking sheet. Sprinkle evenly with brown sugar. Bake for 10 to 12 minutes, or until the pastry is golden brown and the sugar is carmelized in places. Cut the pastry in half crosswise and then into wedges. Serve hot from the oven.

First of all, there is no way that this will roll out to the stated size. I just rolled it out as much as I could. Also, I didn't have raw sugar and so used turbinado - trust me, you won't be disappointed with anything that's granular and brown. But you'd better have gone for a hike or planted a tree that day, because you won't be able to stop eating these! 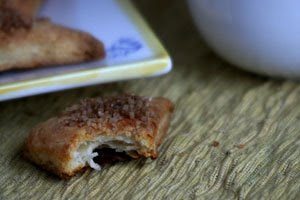 I know people who think I should be committed for walking to the grocery store. Love your concept of play instead of exercise but I also love having a purpose for my walk - milk is enough. There are even times when I'll get only one thing like the milk and know I also will need carrots so there's a reason to go back in the afternoon or evening.

But in Dallas there are months when even I won't walk further than the car outside - 100° and nights that "cooI" to ° I just can't do. That's when I'm only to happy for the gym.

Looking forward to trying these Pillows ;)

Tanna - Well, I suppose that if I lived in Dallas I'd knuckle under and join a gym. I couldn't deal with temperatures like that (especially because there's also humidity). You walk 2 blocks and you need a shower!

My favorite exercise is mowing the "lawn", which is really two hours of mowing whatever happens to be growing (odds and ends of weeds, clover and grass). At the end, I always feel virtuous, and having a small sweet something would be perfect.

Toni, this is zee pillow! So perfect to hit after a walk, or cycling, or any other outdoors activity!! :)

In Holland, instead of walking, folks cycle. Everywhere, even if the destination is a supermarket around the corner. Rain, snow, wind - everybody is on a bicycle, although foreigners (like myself) resort to old-fashioned walking with umbrellas then. :)

And what's wrong with a bag of rocks?

Anya - Holland is clearly very civilized, what with everyone on a bicycle. But I'm with you - if the weather is awful, I'm on foot with an umbrella!

Susan - Nothing at all, if you're using them as part of the landscaping!