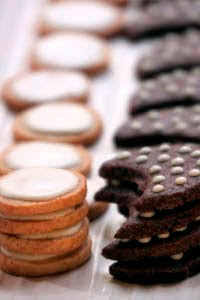 OK, I have to confess something. I made a confession last week, and now I have to confess that my confession wasn't accurate. (Don't you just hate it when even your confessions aren't entirely true?) I said that I don't often eat desserts, and that part is true. What I left out, was that when I find something I like in the dessert world, I just don't stop eating them. And at this time of the year....well, it's hard to get through a day without some kind of sweet staring at you, singing it's sweet little song. And like a siren, it lures you in. So the walnut cake I found so irresistible last week was gobbled up quickly and has become an insistent memory.

And then came this past Sunday's cookie exchange. I had attended it last year and found that the camaraderie was at least as good as the cookies. This year's invitation set something off in me that I still don't understand. Perhaps it was fueled by the walnut cake. Perhaps the taste of a spectacular dessert made me lust after more. I don't know. All I know is that instead of making the requisite one kind of cookie, I was whisked off to cookie nirvana, and the next thing I knew, I was up to my elbows in flour and butter, concocting not one, but three different kinds of cookies. (Is there a "cookies anonymous" out there?)

Since the blogosphere is filled with spectacular bakers, I figured I wouldn't have any trouble finding recipes that sounded interesting and different. I was right. I turned first to one of my favorite bakers, Patricia over at Technicolor Kitchen. Not only does she bake divine looking sweets of all kinds, she also photographs them beautifully. And she posts about them in both Portuguese and English! Anyway, I was treated to a mouth-watering photograph of her spiced sables with eggnog glaze. Cookie #1.

I have absolutely no idea how I came across The Luna Cafe, but I am forever grateful for the wonders of the internet for leading me to this site. On it I found the recipe for the most amazing cookie I've ever tasted. Seriously. You can stop reading the rest of this and just jump to the recipe. I'll understand. When it was my turn to explain to the crowd what I had made for the cookie exchange, I didn't know what to expect when I told people that I had made a chocolate cookie that had ancho chili powder and cayenne. All I can say is that I should have at least doubled the recipe. One woman called it a mole cookie. Since everyone's recipe for mole is different, it's possible. But I do love the sound of "Mole Moons", don't you?

Enough said. You've been reading enough already. Time to get down to the baking. I'll post the recipe for the last of the cookies next week. 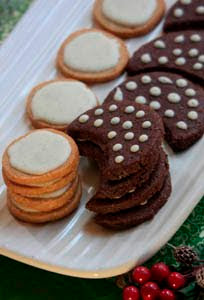 Beat butter and sugar in an electric mixer until pale and fluffy. Add eggs, one at a time, beating to combine. Add lemon zest, spices, flour and baking powder and mix until just combined. Divide dough in four equal parts and form each one into a log that is a little more than 3.5cm (1 ½ in) thick. Wrap well in baking paper and refrigerate for 2 hours.
Preheat the oven to 350; line two large baking sheets with baking paper.
Unwrap one of the dough logs (keep the others in the fridge) and slice it into 6mm (¼-in) rounds. Place onto prepared baking sheets and bake for 10-12 minutes or until just golden – mine needed 15 minutes for staying in the fridge for 24 hours.
Repeat with the remaining logs.
Make the glaze: whisk egg, brandy, rum and vanilla paste (if using a vanilla bean, scrape the seeds with the back of a knife and add to the bowl) in an electric mixer for 5 minutes or until pale and fluffy. Add the sugar and whisk until thick and pale.
Spread icing over warm cookies then scatter with a little nutmeg and cool on a wire rack. Let glaze set completely before storing the cookies.
Cookies will keep in an airtight container for up to 2 weeks.

In order to find this recipe, you will have to click on the link above for The Luna Cafe. The Kitchen Notes below are my own, and have not been copied from any other source.

Kitchen Notes:
First of all, unless you plan on using the parts you cut out to make your moons less than full, don't count on there being anywhere near 6 dozen cookies. Definitely double this recipe. And forget about them lasting for weeks. They'll be eaten long before then. Also, I thought I would be making some orange flavored glaze to decorate these with. I had no time, so I used the eggnog glaze from the other cookies. Worked like a charm!

Dear Toni, you are just too sweet! I'm so glad to see the cookies turned out pretty - thank you for your kind words!
Now I have got to try the mole moons, since I have never heard of them before - they look so beautiful!

Patricia - And thank YOU for posting this scrumptious recipe!

Who needs stars when you can have Toni's Mole Moons! I found it shocking too the first time I was swept away with chile and chocolate ... it's magic.

They are so pretty! Truly professional looking.

Toni, These cookies are totally professional looking. The pics are beautiful and you have totally outdone yourself. I have always loved chocolate and chiles together. I am trying to figure out how to make these cookies look like yours. Cudos.

Natashya - Thanks so much!

Penny - I've been trying to learn food photography by studying the rock star food bloggers. I guess I got closer with these than I have before!

Toni, these were my two favorite cookies from the exchange.
Thanks so much for sharing the recipes.
I made the organic smore cookie bars.
:-)
Sheri
www.MomsForSafeFood.org

Sheri - I'm so delighted you liked them!! And I love the fact that you cookies were organic. We need more and more of that in our lives, for sure.

Oh, what fun! Such things fuel my fantasies.

Toni, these were my favorite cookies at Rox and Kebria's Cookie party. It blew me away when you were describing them and the ingredients; I said hey that's mole! (pronounced like ole!)
Anyway they were fabulous and I can't wait to try making them and sharing with family and friends.

Mimi - Yes, they were great fun!

Phyllis - You inspired me to call them "mole moons" - thanks!