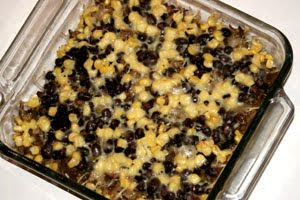 I first heard the term "tamale pie" from a friend of mine who gave me the recipe. I've long since lost the recipe, but the concept stayed with me, even through "The New Mexican Years". Admittedly, this bears no resemlance to tamales, but that's America for you. Grab onto a good idea and run with it.

Because I'm an acupuncturist and involved in wholistic health, people who don't know me assume I'm "pure" - or whatever they mean by that term -- that I'm a vegetarian or a vegan. I'm not, although I often eat vegetarian meals and can whip up a pretty impressive vegan meal. But periodically the carnivore in me emerges, and when it does, anything goes.

This week, the carnivore came out. I found myself at Whole Foods in front of the meat counter, staring at a package of buffalo meat. I decided it had been way too long since I'd made a tamale pie, so I grabbed some of it, as well as some Kosher ground chicken. I was off to make "White Girl Tamale Pie". Let's face it - the words "tamale" and "pie" in that order in a sentence = white girl! Sounds to me like something that's more out of Good Housekeeping magazine than out of New Mexico magazine.

The concept is easy - Just put a layer of corn tortillas in the bottom of a baking dish. Cover that with a layer of your favorite meat, onion and chili, add some black beans and corn, grate some cheese over the top and throw it in the oven at 350 until it starts to bubble. I use Hatch green chili, but you could just as easily use red chili powder. If you buy a tin of chili powder in the supermarket, it will often come mixed with oregano. That, to me, is not what I mean when I say "chili". Chili is a pepper. It can be red or green, but it's a pepper. It's not a mixture of meat and beans and peppers either - though if you're from Texas it is. But if you're from New Mexico, it's peppers. If it's powdered, it's just peppers. When they ask you in a restaurant "red or green?", they're talking about the peppers - often mixed with onion and garlic.

Anyway, since this is White Girl Tamale Pie, you can pretty much turn it into whatever version of Betty Crocker that suits your fancy. Mine turned out a little too mild for my taste, but I remedied that by adding some chopped tomatoes which I picked from my garden, some more green chili and some diced red onion, mixed together to make my own version of salsa. 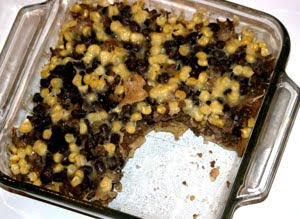 I think the reason I opted for turning buffalo and canned beans into White Girl Tamale Pie is because I can't think these days. I needed something that could sustain me for several days without my having to come up with something original. You see, my precious cat disappeared the last day of August. It's been devastating. I've had a number of wonderful cats and dogs in my life, and each is special. But then there was Boo. 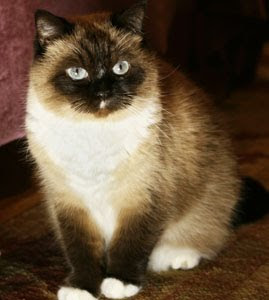 Right now my hope is that someone took her, because there is no sign of anything else in the canyon behind my house. I've scoured it and today a friend of mine scoured it for an hour and a half. Nothing. I'm leaving for China next weekend. My greatest wish is that Boo will show up somehow before I leave....standing at the front door, complaining.
Posted by Toni at 10:40 PM

I've never had a tamale and never a tamale pie...it sounds easy senough...I can find all the ingredients here and it seems much quicker and easier than tamales!
Ronelle

Ronelle - Yes, it's definitely easier than tamales. I've made those too. That's usually a labor of love, which often involves more than one person in the kitchen for hours. Tamale pie is quick, easy and quite satisfying!

I hope with all my heart that you find Boo. It has to be so sad for you to worry about what happened to her. The tamale pie sounds great. Your trip sounds amazing.

Thanks, Penny.......I have a friend staying at my house while I'm gone, just in case she decides to show up after I leave...