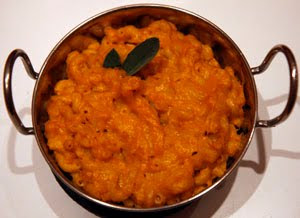 I kept wondering what I was going to do with that second half of the pumpkin. Pumpkin bread kept coming to mind - or perhaps muffins. They'd be great to bring to work. Oh, but I really wanted those pumpkin muffins! But somehow, they just didn't want to be baked. It seemed to me that the pumpkin had other ideas, and it was my job to figure out what those ideas were.

So I thought about it as I went about my days, cooking other meals, reaching into the pantry for other ingredients, and spying that pumpkin, lying in it's bag in the bottom of the fridge.

Just who ARE you, and why can't you just be something ordinary, like bread?
Pumpkin was silent.

I began using the island in my kitchen to cut mattes. Our office has been redecorated with new colors, a new desk and new carpeting. There's a lot of wall space, just waiting for something to go up, and I've got a lot of photos that need to be hung up. A friend gave me a matte cutter, and I've made more trips than I'd care to think about to the art store for mattes. It's been fun, but humbling. My friend who gave me the matte cutter told me that it was simple. It's not. I've yet to achieve that perfectly straight edge, even though I'm using a blade that hooks onto a metal rail, so to speak. But I will get better at this if I keep doing it. I'm determined....

So my kitchen has been used for art projects more than cooking. (It's a good think I make large amounts when I cook -- I'd never survive without leftovers!) Art projects make me hungry, and I find myself snacking. Reaching into the pantry for some dried fruit....or just searching for an idea....

And then I realized that I've been looking at the answer to pumpkin's second incarnation all along. That jar with the little elbow pasta, sitting in the front of the pantry..... It's getting dark early, and even though it isn't particularly cold, it's still the time of year where I start looking for comfort food. How about a pumpkin mac and cheese? Never heard of it, but it sounded like it might work.

I started by making some browned sage butter, then added the pumpkin, which I had mashed with a potato masher. And then I grated some sharp cheddar. I bought a package which weighed in at .72 pounds, and I used about half of it. After stirring that into the mashed pumpkin, I added the mixture to the cooked pasta, scooped it into baking dishes and popped it into a 375 oven for about 15-20 minutes. It turned out surprisingly well for something that took almost no time or effort to make. It had a nice balance between sweet and salty, and that hint of sage in the background. The only thing I might tinker with is the idea of throwing in some roasted pumpkin seeds. I think I'd like the crunch...

The dish you see in the photo was given to me by the wonderful Cynthia over at Tastes Like Home. I made a comment on her blog that I loved the serving pan she had in one of her photos, and the next thing I knew she sent me two of them! Is that gracious, or what?
Posted by Toni at 11:36 PM

Email ThisBlogThis!Share to TwitterShare to FacebookShare to Pinterest
Labels: mac and cheese, Pumpkin

Toni, What a brilliant idea to add pumpkin to mac & cheese. And I'm sure you are enjoying the leftovers.

Penny - I have no idea how it came to me, other than the fact that it was in the fridge. And yes, the leftovers have sustained me for quite a while!

Sounds like real comfort food to me! Just what we need in the run up to winter here in Wisconsin.

Oh Mimi - This would be perfect for winter in Wisconsin! I'm ready to make it again - this time with butternut squash.