Clean Out The Fridge Pasta 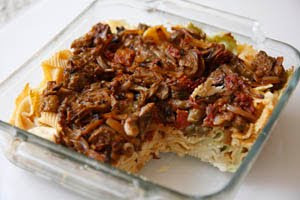 It's been a crazy time. We've been searching for a new receptionist at the clinic, and I seem to be the most computer savvy of the group. Scary, that. But anyway, it falls to me to put the ad in craigslist. A simple part time receptionist job, paying a mere $10 per hour, and I got over 200 responses the first day. After plowing through the first 30 resumes, everyone began to sound alike - all young and enthusiastic and certain that they had what it takes to contribute to our office. "Attention to detail" was often followed by a misspelling. Work history of a month here, a couple of months there.
I began forwarding the ones that sounded like that had at least something going for them to one of my colleagues. I couldn't differentiate on that level - I was drowning in "relevant skills - MS Office, venipuncture (? - I'm an ACUPUNCTURIST!), great ability to communicate, etc." I began paying attention to people who had a background in the arts - at least their resumes were different. And we actually thought we had found someone - a graphic artist with marketing background. But she suddenly realized that she shared a car with her partner and so wound up declining the job.
There is a possibility that we might have found someone. I don't want to get too enthusiastic about this, but one must have hope.
The kitchen is so much easier. Especially before you go away on vacation. You boil some pasta and make a sauce out of whatever leftovers you've got. In this case it was onion, tomato, eggplant and a bit of red pepper. Of course garlic was in there, but I don't consider it to be a leftover. It's like onion or salt - a staple.
I drive to New Mexico starting tomorrow. I decided to take an extra day and go to White Sands outside of Alamogordo. Never been there before, and from what I can tell, it seems like it would be a photographer's heaven. I'll let you know.
Meanwhile, enjoy this Memorial Day weekend. Drive defensively and have fun!
Posted by Toni at 8:17 PM

Reading this, I agree that the kitchen sounds much easier...if it all fails, just drop it into the bin and go work in the garden instead, he he. Your pasta sounds like a perfect weekend dish...and good luck on finding someone!
Ronelle

I'm glad I'm in good company with the "clean out the fridge" pasta and I usually find inspiration at my recipe club. I always forget about using eggplant in pasta, but this post is the perfect reminder about the partially used eggplant that I have to dispose of in some fashion. A variation of this recipe will do in a pinch.

This is how I eat almost every night these days! Too tired to do much but cobble together meals.

Hope you are having fun!

I love it. We call it "Garbage Soup" when we clean out the fridge. Next time, we'll have to try this instead.

Hope you have found the perfect employee and had a wonderful time in New Mexico (?) Is that right? My mind is gone. Just returned from Alaska and I am still suffering from jet lag. Catching up with my favorite people. Pasta looks great.