A Sunday Fritata on Tuesday

It's been a week, let me tell you. I don't know what I did to make the technology gods so angry with me, but just about every electronic gadget in my life has decided it's time to "kick it up a notch". (You should pardon the expression). My computer began making strange noises, and my mouse was frozen. My computer at work has been acting as though someone has spilled molasses in it. I can click on a document to open it and go treat a patient, knowing that it will be open when I get back, but not much before.
I bought a new cell phone because my other one died. The woman at the store told me that I could use my new cell phone as an MP3 player. Cool! I'm going to be on a very long flight in the near future....maybe an MP3 player will come in handy. "All you have to do is get a card at Frye's." So I go to Frye's, wave my cell phone at someone and ask "How do I turn this into an MP3 player?" "Oh......go down that aisle, turn right, and when you get to the desk down there, ask one of the guys to get you a blah blah card. (Do I remember? Not at all.) So I go to the appropriate desk, ask one of the guys and he knew exactly what I was talking about. Found it in a heartbeat, he did. I walked out of there feeling quite ecstatic about the possibility of having a couple hundred songs in my phone. Got home, figured out where that little thing went, inserted it, closed the back and then looked at my phone. How was I supposed to get the songs into the phone? I didn't want to pay for them, as I have quite a few in my computer and on discs.
Back to Frye's, and this time it took a while for the guy to figure out what my question was about. "How do I get the songs into my phone?" You need a card." "I have a card. How do I get the songs from my computer into my phone?" The light bulb went on, and he showed me a cable that I needed, which would hook my phone up to my computer. Yes!! This time when I got home, I managed to create a playlist and download it into my phone.
Where are they? I haven't a clue. I've looked for them, but they don't seem to show up on any list in my phone. But the little chip in there supposedly has something on it, according to what my computer is telling me. (And I won't go into buying the back-up external hard drive. After all, I'm not here to drive you nuts!)
This world has gotten complicated. For some of you, all of this sounds ridiculously simple. You were born at a time when this stuff was just part of what you learned, like riding a bike. For me, it is complicated. I know that at some point, it will not be complicated. I can and will learn it. But right now, it takes up so much time, when all I want to do is seek solace in the simplicity of a meal. 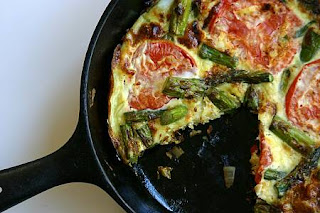 I read about fritatas in both The Joy of Cooking and Marcella Hazan's "More Classic Italian Cooking". You can pretty much mix anything in with the eggs and then pour the mixture into the pan. That's the basic difference between a fritata and an omlette, it seems. In Italy, the "filling" is mixed in with the eggs. Ahhh...simplicity! I had an onion, a tomato, and a lot of asparagus which I had roasted.

1 TBS Earth Balance (Or butter, if you wish).

Since I prefer my onions well cooked, I heated the pan, put the Earth Balance in and added the onions, cooking them until toasty.

Cut the asparagus into bite-sized pieces.

Add asparagus and tomatoes to the eggs.

When the onions have cooked, pour the egg mixture into the pan.

Allow to cook over medium heat until the bottom has set and there's only a little bit of runny egg on top.

Place in the oven under the broiler until the top has cooked and the eggs are set.

It's hard to stop at one slice, I know. Especially when you're seeking comfort in simplicity. Go ahead -- help yourself to another slice.... 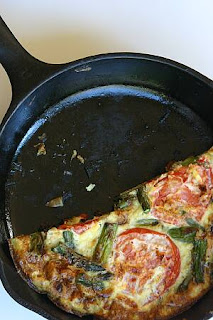 For health news, visit Mission Valley Acupuncture
For a place to share what you've learned about vitamins, herbs, or any other natural remedy, visit my other blog Second Opinion
Posted by Toni at 8:57 PM

Yours looks absolutely delicious, tomatoes and asparagus?? Can I have some, please? ;)

Patricia - You are always welcome to have whatever I'm cooking! If you and Joao are ever in San Diego, we will enjoy a meal together!

Very pretty! I always find frittatas a bit bland but this looks delicious!

Freya - Try some hot sauce! Or you can add some cheese to it, if you'd prefer. Probably best if you add it shortly before the broil stage, or the eggs could stick to the pan.

p.s: good luck with these new technological stuffs, they seem cool but when you get your hands on it, they turn you mad!:)

Oh, Valentina, you are soooo right! They turn you mad! Food is my sanctuary right now. I'd like some of those mangoes you've got on your site! (sigh...)

This looks and sounds way too good, Toni. I just ate lunch and I'm already hungry looking at this.

My wife Marion does an interesting variation on frittatas in which she first browns leftover capellini in a skillet, then pours the egg over and around it and cooks that. Excellent! I'll have to do a post on that one day.

Toni, Jeff and I think fritatas are the perfect food to provide comfort. They were a staple in our homes growing up. In fact, we just ate one last night for dinner! Yours with asparagus is lovely for spring time; I'm sure it was delicious and just what you needed at the end of that long day. :)

Terri - Thanks for the tip on Marion's variation! That solves the leftover pasta dilemma!

Susan - I think I'll be making more of them as the weather heats up. Simple, easy and just right!

Your photos really create a feeling, a sense of place.

Your photos really create a feeling, a sense of place.

Mimi - I agree! I adore asparagus in any form. I used to grow it in NM. It rarely made it into the kitchen - I'd eat it along the way.