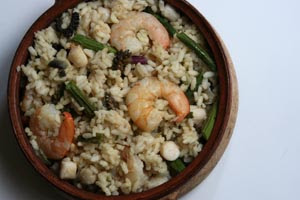 It all started with the morels. I stood there in Whole Foods, and lifted one big, beautiful, lacy one to my nose and inhaled deeply. Suddenly I was in the country, and smelling the slightly damp earth on a summer day. I knew I needed a somewhat neutral palette as a background for this scent, as well as something I could pair with it that would contrast - in color, texture, scent, and yes, in taste. I turned the corner and spied a forest of young asparagus bunches, all standing at attention. Yes, this was what I needed as a counterpoint. But what was the background going to be? As I continued through the aisles, I spotted the bulk grains, and knew immediately that risotto's creamy texture would balance the earthiness of the mushrooms perfectly.

I would have stopped there, but I found myself walking by the seafood counter and spied these large white shrimp and tiny, tender looking bay scallops. Most people here in California ignore bay scallops, but where I grew up on the east coast, we used to incorporate them into lots of dishes - sometimes even in the starring role. I found myself asking for a handful of each.

I've made risotto before, and understood the principle of adding liquid in batches, stirring until it's absorbed, and repeating the process until the risotto reaches it's rich, creamy, perfect texture. So the only question I had was how to deal with the rest of the ingredients. I scored one hit and one miss, but learned something in the process. And fortunately, the final result turned out to be pretty good in spite of my bumbling. My final result would feed three people easily as a main course.

Take about 1TBS of butter, add around 2tsp of olive oil and melt. Toss the sliced mushrooms and asparagus in this mixture, spread on a baking sheet, sprinkle with salt and pepper, and roast in the oven until it's slightly toasted - about 15-20 minutes.

While the asparagus and mushrooms are roasting, dice the shallots. Put a chunk of butter into a heavy skillet, add shallots and saute over medium heat until tender. Add risotto and stir until all kernels are coated with butter. Add wine and stir until liquid is absorbed. Add heated chicken broth, about 1/2 cup at a time, stirring until all the liquid is absorbed. After the first 1/2 cup of chicken broth has been absorbed, add the shrimp and scallops. Continue adding liquid and stirring until risotto is creamy and soft. Turn off heat and add the asparagus and mushrooms. 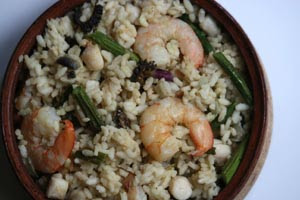 Notes: If I did this again, I would add some lemon zest to the mixture. I would also cook the shrimp and scallops separately, as they took much longer to cook this way. My instincts would be to saute them in a little white wine and some truffle oil. In fact, I intended to use truffle oil for the asparagus and mushrooms, but when I opened my pantry I discovered I was out! (Gasp!)

Note to self: Buy some more truffle oil next time you're in Trader Joe's!

Have you ever cooked with morels? What did you do with them? Are they not the most decorative of mushrooms, especially when sliced across? Like lacy rings....

For health news, visit Mission Valley Acupuncture
For a place to discuss which natural remedies work for you and which don't, visit my other blog:
Second Opinion
Posted by Toni at 9:39 PM

Morels and asparagus together.... in risotto... with scallops...
Heaven!
I make risotto lots and always cook the condimenti - the stuff that's going into the rice, seperately, adding it at the last minute. The one exception is for asparagus risotto, when the asparagus is cooked with the rice to get all the flavor, but nothing else is added.
Yours sounds soooo good!

I haven't made risottos in quite a while now, Toni! Yours looks so good!

This dish is one of the reasons I like rice - so many things can be added to it to create a delicious, flavourful, totally satisfying one-pot dish.

Katiez - I have learned the hard way about adding things afterwards!

Cynthia - Yes, I agree. Rice comes in so many forms and is so versatile. And I'm someone who loves one-pot dishes!

(And hi to you! I have been kind of MIA with school getting back - Hope all is well with you!)

Chris - Don't worry about being MIA. I get it. I've been kinda scarce myself. Working like crazy on my business website. It's a lot closer to done, but still not there....

You know, just this morning I was thinking I've been doing a lot of spicy cooking and felt it was time to cool things down for a change. This fabulous recipe sounds like just the thing, Toni! I agree about cooking the shrimp and scallops separately. They need to cook quickly so they don't go all rubbery on you.

I've made risotto with shrimp and asparagus many times, but adding morels (which I've never had) looks like the perfect little spark of flavor and fragrance.

Terry - I know what you mean. As you know, I love spicy! But shrimp are so cooling, I just NEEDED them!!!

Susan - I hadn't tried them before either. I must say that roasting them was a great idea. We're having a heat wave now, and I doubt if I'd do that today - but once it cools off.....definitely!

Mmm...morels and asparagus are the perfect pair. I've made risotto with morels. Their woodsy flavor and chewy texture seem suited for thick, creamy risotto. I'll have to look for the truffle oil at TJ's too.

Susan - Truffle oil would definitely be the way to go!