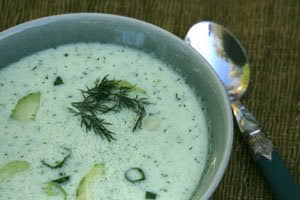 Last week I was in New Mexico. Now, most people, when they hear "New Mexico", they immediately think "Santa Fe", but my house is in the mountains east of Albuquerque - about an hour south of Santa Fe. Santa Fe is lovely, which is why it attracts tourists and movie stars, as well as all kinds of people who are into New Age thinking - psychics and healers, numerologists and astrologists. Where my house is situated attracts people who have jobs in Albuquerque, but who prefer to "get outta Dodge" at the end of the day. There are also lots of artists living in the mountains, but it doesn't attract the publicity of Santa Fe - mainly because it lacks a real town. Santa Fe is old, has beautiful architecture, and real estate values high enough to attract people with money.

All of that being said, I spent more time in Santa Fe and Galisteo (just outside of Santa Fe) this trip than I usually do, and as a result, I met some pretty fascinating people. The weather was typical of this time of the year in New Mexico - one minute it was snowing, the next it was sunny. Mostly it was windy, but sometimes not. It sleeted one day, and then the sky put on a spectacular show of clouds - the clouds of Michaelangelo, as Joni Mitchell once wrote. I went for a long hike one day and needed no more than a long sleeve cotton top, and I sat outside and ate salad.

On Easter Sunday, we went to hear a talk given by a man named Paxton Robey. Paxton is an engineer who has, over the last ten years, been doing training for large corporations as well as the Department of Defense in computer networking. However, back in 1968 when he was working for a major U.S. airline, he became aware of the fact that he had psychic abilities, and ever since then he has been working more and more in the spiritual realm, working with metaphysical and spiritual seekers. Whatever your take on these kinds of things, Paxton's message is always positive and uplifting. If you're interested, you can check out his website at No Time For Karma.

That evening, we went to a meditation at the Light Institute in Galisteo. I head read about it back in the 70s in Shirley McClaine's book "Dancing In The Light". She mentioned the Light Institute in that book, and also talked about having worked with it's founder Chris Griscom. In those days, Chris was doing past life regressions using acupuncture, and Shirley McClaine was one of her clients. These days there's a free meditation every Sunday evening, and Chris led it on Easter Sunday. Following the meditation, there was a discussion whose theme was "transcendence".

And so on, and so forth.....That was my trip to New Mexico this time. Now, let me ask you something. Do you think that after spending days like that, you would be able to post recipes and photos of food? I mean, even if the food was spectacular? If your answer was "yes", then you are waaaaay ahead of me!! It was all I could do to keep my eyes open past 9:30pm!

Which is why I missed last Sunday's post. Sorry 'bout that.

Now that I'm back in San Diego, the weather has gotten beastly hot. I think it was in the 90s today. THE 90S, PEOPLE!!! That's ridiculous! It's still April! Supposedly it will remain quite warm until around Thursday, when it will be back in the 60s again. So when faced with weather like this, all those plans for roasting more veggies went out the window. I needed that window open and the oven off. It was time for cold soup. And for some reason, it needed to be green, so gazpacho was out.

In Chinese medicine, different foods have different properties. Cucumbers are a cooling food, which is why they're perfect for summer when you want to cool down. (Watermelon is another great cooling food.) I thought of cucumbers and scallions and dill.....and in my mind the soup was made. Now all I had to do was buy the cukes, dill and some buttermilk. I had the rest. I kind of winged it with this one, so proportions are approximate. But you guys are phenomenal cooks - you'll know how to adjust.

Chill. This is important, because it tastes so much more refreshing when it's chilled for at least an hour.

If you don't have green chili, I would recommend using something spicy. You could use pepper or hot sauce, but be judicious. You don't want the heat to overpower the flavor of the dill, and this is coming from a woman who loves spicy food!!! 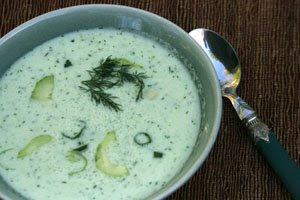 What an enlightening trip you must have had!! :)

I love that area in the mountains east of Albuquerque, and I agree about Santa Fe. It's changed so much in the 20 years since our first visit there (when I seriously considered moving to the Southwest, Santa Fe was the place I wanted to be). We're just enjoying early Spring here in the Northeast, though, so I cannot imagine 90-degree weather! I do love cucumber dill soups, though, and will remember this one when summer arrives.

Lydia - Yes, Santa Fe has changed over the years, but it's always been a magnet. When I lived in New Mexico, I knew people who had lived there for many years, and they were telling me how much Santa Fe had changed since THEY first moved there!

New Mexico seems to be many things to many people. My mom & dad lived in Los Crusus for years and an aunt in Deming. When it's not in the 100s, I've enjoyed many times there. Your trip sounds like a wonderful expansion of mind.

Tanna - Well, that's the southern part of the state for you. Once you get further north and into the mountains, it's a whole different story.

what a wonderful trip you had...and coming to the soup it's fabulous...i'm gonna try it this weekend...gonna get the ingredients from www.myethnicworld.com and try it.

A chilled cucumber and dill soup sounds nice and refreshing and good!

Jenn - The trip was terrific, actually. Not my usual trip, but still great.

Sampada - Thanks for stopping by. Hope you enjoy the soup!

Kevin - I don't know if it's too early for you to be craving this kind of soup, but it's definitely refreshing!

I've only been in Santa Fe once and loved it - and Taos. I love the southwest and wish I could visit it again....Maybe some day. And your cucumber soup looks delicious! bring on summer!

Katie - If you ever get to the southwest again, let me know. You'll have a place to stay and people to meet.

This is a great post. The soup sounds fantastic too. i really enjoy the soup. I read your kitchen notes your explanation was very easy to read and understand. I am sure it tastes good too. I was just about to go to bed, but now I feel like I have to have a midnight snack first. Your picture made me hungry. Thanks so much for sharing.

We are ready that our company Acquire Cialis Knock off Pharmacy is solitary of the outwit in the Internet, commonly, cheap Viagra now specializing on online pharmaceutics Viagra.