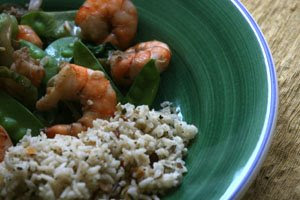 I was telling a friend the other day that I believe the secret to living well is having a good Asian grocery market nearby. There was a large one not too far from me which had been closed for months for remodeling. It recently reopened, and I'm back in heaven again. Large bags of longan fruit, huge bags of snow peas, loofah - a wonderful vegetable as well as a decent sponge - green veggies with no English names, exotic tapioca desserts with things like corn in them, every conceivable sauce and some inconceivable ones too, and some of the freshest fish and meats you'll ever see behind a counter. And all of this sold at recession prices.

I was in somewhat of a daze by the time I reached the fish counter in the back of the store. But the large tiger shrimp selling for $5.99/pound made me snap out of it in a hurry. I had already picked up a bag of snow peas and another one of baby bok choy. The shrimp practically winked at me, whispering "Hey, honey, how about taking me home with you?" I looked into my cart and back at the shrimp and decided that they had a point. Who was I to argue with perfection?

As usual I just started assembling a meal without thinking about amounts. But you who read this blog are better chefs than I am, so you can pretty much guess at the amounts. Besides, if you're wrong, there's always hot sauce!

After heating up some canola and hot pepper oil in a pan, I added sliced onions and some garlic. When the onions had wilted, i put in the bok choy, which I had cut in half length-wise. After they were lightly seared, I threw in the shrimp and continued to toss the ingredients. The last veggie to go in was the snow peas. I love snow peas in salads and I prefer them very lightly cooked. After the snow peas were in, I added some seasoned rice vinegar, about a teaspoon of sugar, lime juice and a touch of soy sauce.

There's precious little chopping involved in this recipe. The bok choy was only sliced in half. The onions only need slicing. Only the garlic needed to be minced. How simple was this? Simple enough that you could fix it mid-week and still have time for your favorite TV show. Enjoy!
Posted by Toni at 10:58 PM

Food-wise, everybody seems to live in heaven these days! :) In fact, I'll be headed there too, I feel, when I try these shrimps because they look irresistable. :)

Loved your remark on the hot sauce! :)

And that's the way dinner needs to be most of the time. Looks fabulous!

Anya - Well, you've got heaven with canals - gotta love that!

I agree -- cannot imagine heaven without an Asian supermarket. And a taco stand. And New York soft pretzels....

Wow, I agree with you on that, and I haven't had a good Asian market nearby in YEARS. Terrible! But these shrimp look lovely!

Can't wait to try this this weekend!

Asian groceries are my favorite placeto shop. Its a whole new world and the deals in the meat and fish sections are always amazing.

Whenever I am in the US, one of the main places I must visit are Asian markets.