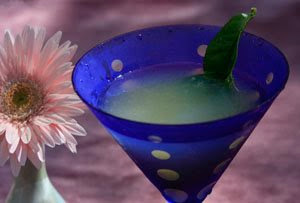 A friend of mine gave me a magazine the other day in which there was an article about the Joy of Cooking, and it's author Irma Rombauer. I've had this book ever since.....well....let's just say since before I can remember. It was the first book I used to bake French bread. I've relied on the conversion tables, and when I lived in New Mexico, the advice on cooking and baking at high altitudes. I didn't know much about it's author, Irma Rombauer. I wasn't aware, for instance, that her husband had committed suicide after the 1929 stock market crash, and that Irma turned to writing a cookbook as her way of coping with the loss. I'm not sure I ever realized that this book came out originally in the 1930s, and that it addressed the struggle of putting food on the table in economic hard times. I just used it as a reference book more than a cookbook, and for that purpose it worked very well. 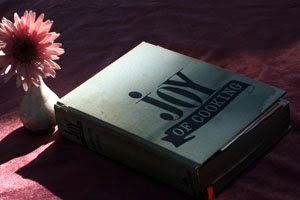 The copy I've got was published in 1964 by Marion Rombauer Becker - Irma's daughter, and was "modernized" to include new sections called "The Foods We Eat" and "Know Your Ingredients". I absolutely adore the story with which she opens her section on the foods we eat. "We enjoy the cynical story of the old-fashioned doctor who insisted first on going straight to the kitchen of the afflicted household. Not until he had effusively thanked the cook for giving him a new patient did he dash upstairs to see how he could relieve the cook's victim."

Irma was apparently an excellent hostess. She could throw a party in a heartbeat and keep everyone entertained. The current edition of the book begins with how to set the table, and includes instruction for both formal and informal dining etiquette. 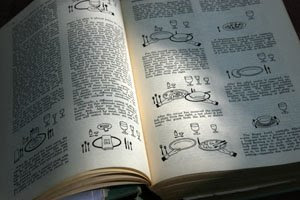 Her original edition also started with entertaining, and apparently began by extolling the virtues of cocktails. She declares that whatever mixtures you put together for your cocktail, you should keep the alcohol content of your drink up to 60% and never below half. It's pretty clear why she was such a successful hostess! She also admonishes us to remember that since cocktails are served before a meal, they should never be too sweet or overloaded with cream or egg. Their job is to stimulate the appetite, not to spoil it.

These days, there are many people struggling to put food on their tables. There are many more people trying to keep the roof over their heads so that they will have a place for that table. But the thing to remember is what the ancient wise men told the king when they were asked to sum up the wisdom of the world: And this too shall pass. Hard times call for an enterprising spirit. In other words, it's time to take those lemons that life just handed to you and make lemonade.

Well, I know that I'm one of the lucky ones because I still do have a roof over my head, and being self-employed means that I still have a job. So when one of my patients came in with a huge bag of lemons, I thought it wise to make lemonade. But wait! Why stop at lemonade? Why not put a twist on the old and create something new? Besides, I had some kaffir lime leaves leftover in the fridge, and I wanted to use them. So I came up with this and taste tested it. May I be the first to tell you that it was delicious?

I decided to start by making a simple syrup and flavoring it with the lime leaves. Basically equal parts sugar and water (or less water, depending upon your taste), heat to dissolve the sugar, and throw in a handful of lime leaves - probably at least 8 of them - then let them steep for at least an hour. Pull out the leaves and you can store this in a jar in the fridge.

For each Kaffir Lime Lemon Drop cocktail, you will need:

Mix all the ingredients together and shake in a martini shaker. Strain into martini glasses and garnish with a lime leaf. 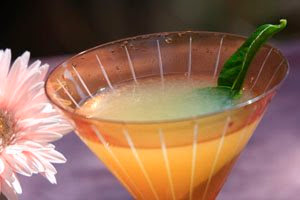 What's your favorite old fashioned cookbook on your shelf? Is there one you inherited from your mom or aunt, and you just can't let go if it's stained pages?
Posted by Toni at 6:42 PM

I have at least three different editions of Joy -- my favorite is from 1971 or 72 (can't remember which), and it's well used, and well stained. I also have my mother's copy of Peg Bracken's I Hate to Cook Book, which I think was my mom's favorite.

My paternal grandmother has a HUGE hotebook, with pages yellow and brittle as ancient papyrus, of hand-wrutten recipes for dishes common to the southern russian (cossaks) cuisine. She says I stand to inherit it, which I am only happy to.

I read your earlier post about comfort foods. So sorry for your dip...Is it a bug or something? I seem to have one too. Sigh.

Lydia - I used to have 2 different editions, but one seems to have migrated without my awareness. My mom used a Better Homes cookbook, I believe.

Anya - You are a very lucky woman to have that notebook in your "queue"! Have you seen the film "Chef In Love"? It's a French/Georgian production. You might be interested in it.

Toni, I haven't seen the movie (shame is mine!), and am eager now to get my hands on it. Thanks!

The cocktail looks and sounds wonderful, Toni! I could use one right now. I had a copy of Joy of Cooking from my single days, and Marion brought her own copy to the marital party. I have to say, I was less than enamored with it, though. I found that any time I tried to make something from it, each recipe would send you to two or three others in the book to make components of the recipe I was trying to make. I just wanted to cook, not cross reference!

That version you have it a treasure!

Anya - You will like it, I'm sure. If nothing else, it's beautifully photographed, and I remember loving the music.

Terry - I know what you mean by the cross reference thing. But as I said, I didn't use it much for the recipes - more as a reference book. As in, how many minutes per pound do you cook a turkey?

Cynthia - I love the cookbooks I've got with stains on their pages!

I found your food blog going through a few links. Glad I ran into it. Didn’t know that the food blog/recipe community was so big online. I love your posts!

My fave is the "Culinary Arts Institute Encyclopedic Cookbook." It's such fun, very classic American cooking from 1948. I bought it new and read the whole thing on our last trip to Maine - of course, I wasn't driving. : )

Cocktail looks swank and swell. I'm due for some mixology.

I think that was my first copy of the Joy. It's been a gem of a book for all that time. I inherited my mother-in-laws copy that my husband and his brothers gave her in the 40's. And I even bought a later copy with a plastic comb binding.
I still use it for reference from time to time even now with the internet ... probably because I know where something is in the book - no memory in my data bank.
Hers is a good story. There is something wonderful about the human spirit that responds well to a challenge.

I loved that cookbook so much that I gave it to you at holiday time. '69 or '70 or '71? I had no idea how to cook and (like you) I used it as a reference. It did not fail me. I am pleased you still appreciate it. Love, Your X.Sis'In.Law

I never knew the story behind the Joy Of Cooking. One day I have to play with Kaffir Lime leaves. Cocktail sounds wonderful!

I have a Best of Amish Cooking that I like and my mother had a book called Searchlight Cook Book from the late 1930's that I used a lot alongside the Joy of Cooking when I started. Lately I have been into Paula Wolfert's Moroccan cookbooks and the 5 minute artisan bread. Another one I like just for the pictures is the Ada Boni Italian Regional Cooking. I don't think I have ever made anything from it but the photos are magnificent and show me what my Italian dishes should look like.

It is very interesting for me to read that article. Thank you for it. I like such themes and everything that is connected to this matter. I would like to read a bit more on that blog soon.