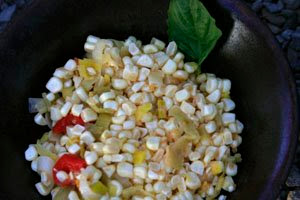 To me, there are two main reasons to have a garden. The first and most important one is for fresh tomatoes. I have no idea how modern agribusiness has managed to rob these miraculous fruits of their sensational earthy sweetness, but they have. From my perspective, those genetically altered red round things in the store should be called something else, not tomatoes. A fresh off the vine tomato can bring tears of joy to my eyes. A store bought one brings a yawn to my lips.

The other reason to have a garden would be to have fresh corn. Now, when it comes to corn, I have gotten some wonderful corn from our farmer's market. I have even bought delicious corn from the store. And corn does say "summer", in a clear, fresh yellow or white voice. So I have no problem with buying wonderful corn when it's in season.

But have I told you about when we had a garden in New Mexico and grew corn? When it was ready for picking, there would usually be tomatoes ready as well. Bob and I agreed that dinner should be corn and tomatoes. He would grill or saute the tomatoes with some fresh herbs from the garden and a little olive oil. I would place a large pot of water on to boil, add a touch of salt, and when it was almost boiling, I'd set out to the garden to pick corn.

We had a large compost pile back then, and I'd stop at the compost, shuck the corn, and then head in to the kitchen with my clean, freshly picked corn. Someone had told us that the sugar in corn turns to starch in the space of about 15 minutes. I have no idea if that's true, but I can tell you that those ears of corn had a taste that I haven't experienced anywhere else, because I've never gone through that ritual anywhere else. And I do believe that those ears of corn had more sugar in them than even the sweetest organic corn from the farmer's market. Perhaps it's merely my memory that makes them sweeter. But I also remember that we both were in agreement on this one - that those ears of corn were the best ever!

But there's a wonderful recipe that I got from Rachael over at Fresh Approach Cooking which I absolutely must share with you. I made it for some friends who were coming to dinner. One of them confessed to me at the end of the meal that normally he doesn't like corn. I stopped counting how many times he went back for more. He couldn't get enough, and neither could anyone else. People raved about this one, and you will too. Not only because it's so good, but because it's also fresh, light, and incredibly easy to prepare. 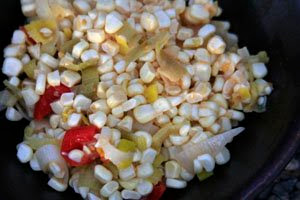 Cut the kernels off of 6-7 ears of corn. Place in a large bowl.
Cut the green parts off of 2 good sized leeks and clean
Slice the leeks in 1/2" slices
Put the leeks in a pan with some oil and butter and cook over medium high heat until soft - about 10 minutes
Cut cherry, grape or plum tomatoes in half.
After removing the leeks from the pan, throw the tomatoes in briefly - maybe 3 minutes.
Coarsely chop a handful of basil - you may use purple or green - it doesn't really matter
Toss all ingredients in a large bowl and add white balsamic vinegar, salt and pepper to taste.

If you plan on having enough to serve your guests, you might want to make extra. You will have a hard time stopping your taste testing.

When I lived in Boston, there was a small farmers market across the street from our house on Wednesday afternoons. I would buy four things every week during the summer: corn, tomatoes, bread and cheese. That would be our Wednesday night dinner, and there was nothing better.

Tomatoes. God I love tomatoes. Mine are not doing so well this year. Maybe I should have planted corn instead. Sigh. So silly to complain about the weather, and yet it's all I can do.

Beautiful recipe. If good tomatoes ever make it to the farm stands this year, I'll be sure to give this a try!

Ann - Can you ship some of that water out here? We're in the middle of a drought!

Agreed...tomatoes and corn should both be fresh off of the plant! Peaches too I think...or as close to it as you can get. I was just thinking that as I was eating the most amazing peach ever at the farmer's market last weekend. Fabulous recipe!

Laura - This is why I drive for an hour and a half into the mountains to get peaches. They are picked the same day and sold at a little stand by the side of the road.

Oh my heavens YES! I remember corn from my grandmother's garden as a small child. It really was the best.
Now even the freshest farmer's market corn, I put just a teaspoon of sugar in the water and it brightens it just enough to bring something of that memory back.
When we're in Michigan in August, I'll stop at a back roads farm stand where you make change yourself and buy their corn and tomatoes ... it's heaven.
Oh yes and peaches ... they should just be outlawed at the grocery ... they're worthless.