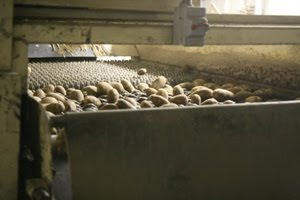 I don't think I will ever look at a potato the same way again. I've always loved potatoes - baked or mashed or fried - and I've always considered them simple but satisfying food. But after visiting Walters Produce in Newdale, Idaho, I've gained a new respect for the lowly spud.

My sister and I have been on a road trip through Idaho, Wyoming and Montana, and tomorrow we will head for South Dakota. Our first stop was in Tetonia, Idaho - just west of the Grand Tetons. We opted to stay at a bed and breakfast in Idaho, rather than pay the exorbitant prices in Jackson, Wyoming. The Locanda di Fiori, or Inn of the Flowers, turned out to be more than we could possibly have imagined. It was, in short, perfection. The owner - Carol - has become our new best friend. Not only did she pay attention to every last detail, including Ralph Lauren sheets and towels, organic soaps, and herbal teas in our room, but her breakfasts are to die for. Our days started with fresh fruit, eggs, bacon, French toast, ham, and the best coffee west of the Mississippi. They continued with laughter, intelligent conversation, the last float trip of the season down the river in Jackson, Wyoming, with the Barker Ewing company, where we saw moose, river otters and bald eagles - to mention just a few things. Carol then bought us some wine at Dornan's restaurant in Moose - yes, that's Moose - Wyoming, with a spectacular view of the sunset over the Tetons. We laughed and talked and wound up having pizza and more wine as we watched the colors change.

She then guided us back to the inn, where we changed into our suits and soaked in the hot tub for about an hour, sipping wine and practically listening to the stars crackle in the crisp night air. The next morning we said our goodbyes, and we headed off to Newdale. Carol had told us about the potato processing plant there and said that we had to visit it. At this point, we knew that we'd like anything she said, so we crossed the tracks, turned right, and drove down to the office. 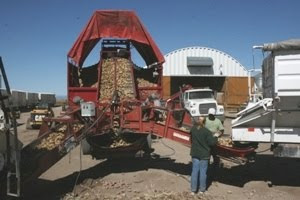 W. Jeffrey Walters and his brother are the third generation owners and operators of Walters Produce. 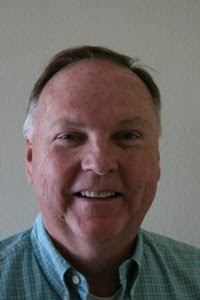 He took us on a tour of his facility, which processes something like 800,000 pounds of potatoes - mostly from Idaho. The soil in Idaho is volcanic - a rich, black soil which produces potatoes unlike any other kind in the U.S. Potatoes from farms owned and operated by the Walters family, as well as farms all over Idaho and surrounding states arrive daily by trucks. They are graded, sorted, washed, inspected, bagged, boxed, dried, shipped and stored - all in a giant, automated facility which employs hundreds of workers - many of whom are on a work program from the local prison. 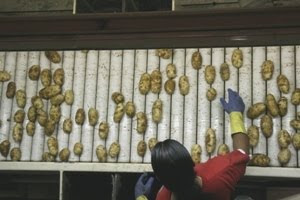 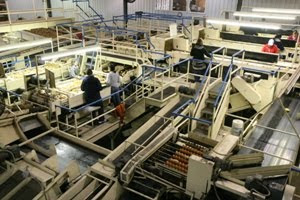 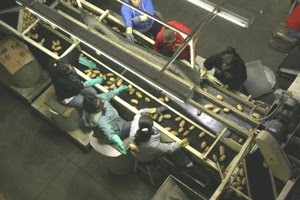 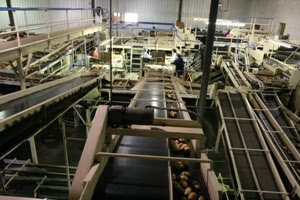 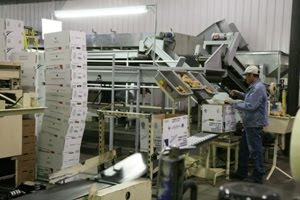 With every step through the plant, we inhaled the earthy smell of potatoes. Right now they are processing mainly russets, with some Yukon golds. At different times of the year, there are different varieties being processed. By the time we left, we absolutely needed to have some potatoes! We both opted for some of the medium sized ones - perfect for baking. He was so kind - he gave us a small bag of them, even though we only asked for 2! So far we haven't stayed anywhere where we have baked them, so we will probably go back with them in our suitcases. But what a fabulous souvenier! It beats a tee shirt any day!
Posted by Toni at 8:28 PM

Email ThisBlogThis!Share to TwitterShare to FacebookShare to Pinterest
Labels: potatoes

Sounds like the makings of a perfect vacation -- and yes, I'd rather bring potatoes home any day!

I love it!!!! I envy my Aunties and your travels. xoxo

What a great story. The bed and breakfast sounds charming and potatoes are much better than T shirts. Looking forward to more updates.

Thanks for taking me on this trip with you.

Lydia - It was terrific!

Rachael - I thought of you so much - You would have loved it!

Penny - B&Bs are definitely the way to go, in my opinion. You meet people and get to know them, as opposed to just getting a key to a room.

Cynthia - Any time, my friend!

This sounds like a magical trip, Toni. I hope there are more stories to come.

I was going to make a quick pasta tonight, Toni, but after reading this, I'm going quicker still with a big baked Idaho.

I honestly never thought of the amount of work there is behind putting potatoes in our grocery stores. Excellent post. I need to plan more vacations like this.