Using up leftovers before my next trip... 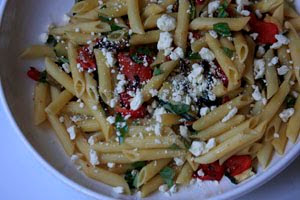 I know....I know..... I seem to be going on more and more trips lately. I just got back from Orcas Island and now I'm headed off to the Grand Tetons and Yellowstone. And Montana. And South Dakota. I mean, there's a buffalo roundup in Custer State Park just minutes from Mt. Rushmore! What's a gal to do? When I was in New Mexico over Memorial Day weekend, a friend told me that she had gone to it several years ago, and the ground shakes under your feet as 1500 bison come roaring over the hill. I knew I would have to check that out. Besides, I've never been to that part of the country, and it's something I've wanted to do for a long time.

So I'm doing my own version of a roundup here at home. I'm rounding up everything I've got lying around the fridge and trying to eat it before I leave. While I try to limit the amount of pasta I eat, it really is the very best way to incorporate leftovers into a tasty meal. Now I need to invite the neighborhood over for dinner so that I don't have leftover leftovers!

This meal is one that doesn't really have a recipe. You take whatever pasta you've got and cook it. You add whatever leftovers you've got. With me, it was mainly grilled veggies, tomatoes from my garden (not exactly "leftover", but I did want to eat as many as possible!), and some goat cheese. I tossed it together with some olive oil and had a simple, tasty meal. I've done this many times over the years and it's always different depending upon the leftovers, but it always works. 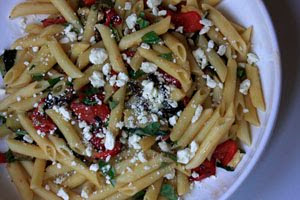 I'll be leaving tomorrow and back on Oct. 1st. But before I go, I wanted to respond to something that Terry B from Blue Kitchen wrote in his comment on my last post. I had stated that part of our national obesity problem comes from petroleum - that we'd rather drive than walk. His response was a good one (I'd encourage you to read it). He stated that it was a cultural thing - that Chicago was a walking town, whereas St. Louis was not. I get this one. I was born on Long Island, and New York City is a walking town, as are pretty much all the cities in Europe. When I lived in the mountains of New Mexico, it wasn't common for people to walk to the grocery store, even though it was only 1 1/2 miles away, because there were no sidewalks. But New Mexico is a place where people who love the outdoors go to live. Instead of walking to the grocery store, people go for hikes in the mountains in the summer and ski in the winter.

Here in San Diego, there are sidewalks, but walking is still looked at with suspicion. Jogging? No problem. But walking? Is there something wrong with your car? Perhaps when the price of gas gets up to what Europeans have been paying for years and years, even people in San Diego will consider putting on those new walking shoes and actually walking in them!

Have a great couple of weeks, my friends! Oh - and if anyone knows of a great little restaurant in Bozeman, Mt., or anywhere near Jackson Hole, Wyoming, I'd love to hear about it!
Posted by Toni at 12:40 PM

Have a great trip! There is a great Italian restaurant on a side street in Jackson Hole. I wish I could remember the name. They had a wonderful Speck Carbonara that was to die for. I know, I know, more pasta, but it was yummy.

I was in San Diego this summer for almost 2 weeks--Convention Center area. The pedometer showed 52.5 miles when I left. I had a light rail pass, but still walked a lot. ATL is NOT a walking town and I struggle to walk 10 miles per week.

I agree, adding pasta is maybe the best way to make a meal of your left overs. Have a great trip!