Couscous, squash and a longing for a simpler time 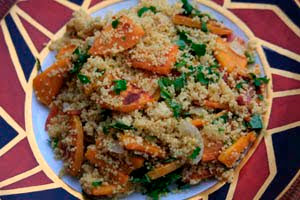 See that plate? It was one of 4 which was hand painted and given to my parents on their wedding. Painted on the bottom it says: To Marcy and Cy, January 25, 1931. They were soul mates who had a 60 year honeymoon. My dad died in 1991, the day after Mother's Day. He was 9 years older than my mom, who died 9 years later, on Father's Day. They both made it to 90.

They lived in a simpler time, in some respects. Even though they lived through 2 world wars, news traveled slowly back then. The way people heard about the war was through the radio and the way they saw it was through newsreels. World War II was probably the last major war to garner national support. (The Korean War was called a "police action".) You didn't think twice about what your neighbor thought of the war - you knew. We were all in it together as a nation.

They lived through a depression, too. The jobless rate was something closer to 25% back then. People were hungry and out of work. The government stepped in and created programs to help put people back to work. Ultimately it was World War II which brought us out of the depression and put this country back on it's feet. We emerged from that war as international heroes, admired and respected by pretty much everyone in the world.

And from that point on, our trajectory has been like a rocket to the moon. In fact, it was a rocket to the moon, and we all applauded that moment. New technologies have continually emerged, and we have embraced each one of them with enthusiasm. Cell phones, ipods, netbook computers, digital cameras - the world is at our fingertips...at my fingertips...and I've grown used to that.

Until the power went out today. And for some reason my cell phone decided to stop working. Suddenly, it was like being back in time. No computer? No cell phone? Whaaaaat?????

So I took myself out to the beach - with my digital camera, of course. (Thankfully, that still worked!) There have been storms coming through San Diego, and the tides have been high and the waves have been enormous! 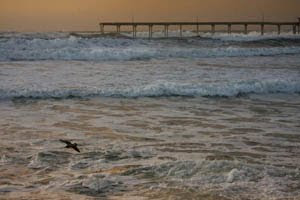 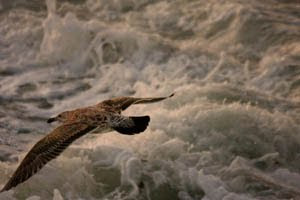 For these gulls, the world hasn't changed much since my parents time. The ocean still crashes against the rocks, and food is the issue of the day. The air currents still lift outstretched wings. It was the reminder that I needed. It reminded me of one of my favorite poems - "Wild Geese" by Mary Oliver, who wrote "Whoever you are, no matter how lonely, the world offers itself to your imagination."

The world did, indeed, offer itself to my imagination, and when I got home I found that my electricity had returned, my cell phone worked when I used my bluetooth, and I was hungry for a simple meal. One of my go-to dishes for healthy fast food is couscous. It's quick, easy and versatile. Chop up some onions - both red and yellow, slice some squash, chop some parsley and garlic and you've got dinner as quickly as you can saute. The couscous will soak up the boiling water (or chicken stock, if you've got some - which I did after last week's chicken) in a matter of minutes. Any leftovers in the fridge can be used. And when you think about it, every meal is a special occasion, so why not drag out the "good" dishes? Why, you can even light candles and turn off those electric lights if you want to make it a really special occasion.
Posted by Toni at 8:44 PM

Simplicity is a wonderful thing. How great of Mother Nature to provide an excuse to slow down for a day.

What a beautiful post and a heart warming story about your parents. Slowing down to absorb all that is around us is so important. Our society seems to view slowing down as a luxury, but to me it is truly a necessity for wellness.

Lydia - And the storms keep coming. I have electricity, but less enthusiasm to go out. Another slowed down day.

Lori - Thanks. I agree with you about slowing down - it's a very important part of our health.

awww i love this post toni... it reminded me of that song, we used to sing in my childhood whic goes:PAUSE A WHILE, PAUSE A WHILE
IN THE HUMDRUM OF THE CITY AND BEHIND A CLOISTER WALL,
IN THE EARLY MORNING AND WHEN SHADOWS START OT FALL, SEE CREATION BENDING TO THE MAKER OF IT ALL,
AND ALL WE HAVE TO DO IS PAUSE A WHILE.

A most beautiful way to bring on a "simpler" time and way. Your plates are treasures. Using them only makes them more special. My mom at some point said to me: I'm using all the good stuff. Why should I save it for the 2nd wife. 10 years after she's gone there still is no 2nd wife.
Thanks for this one.

Diva - Thanks for the lyrics to the song. Yes indeed - pause a while.

Tanna - Your mother sounds like she had a great sense of humor!

Beautiful pohotos and such a lovely story about your parents...about life when it was simpler and how we are sometimes forced to retrieve that simplicity when modern day fails us! I agree that you plates are treasure and yeas, I also agree with you...time is too short not tu use what we have and enjoy it!
Ronelle

What a beautiful post. It really struck me because I had a similarly reflective day yesterday. My most recent blog post is all about stopping and smelling the roses.

Sometimes it is good to remember the simpler life of our parents and grandparents. I know I do often, and it has been an inspiration for me to simplify my life. Thanks for sharing this post.

Ronelle - Thanks! Your blog is always a reminder of this for me.

Apprentice - Thanks for stopping by my blog! It seems we're on the same page.

Jenn - Simplifying is definitely on everyone's minds these days, I think. It's not that our parents didn't live through hard times. I think they just had different expectations and goals.