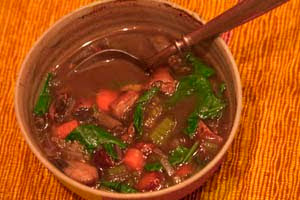 I took a walk through Balboa Park today, while it was getting grayer but still warm. There are canyons in the park where I have seen coyotes sunning themselves in the past. Today's hike yielded the greening of the grasses and trees. I live in a drought-deciduous climate, meaning that trees and shrubs around here lose their leaves (and grasses get browner) with the warm, dry weather of summer. Once the rains come - which is winter time - everything turns green and lush. Well, we've been having a rainy winter this year, and I, for one, am grateful! Yes, I love the sunny weather, but we needed the rain. The reservoirs needed it. The earth was parched and thirsty. Those of us who live in San Diego often tend to forget that this is a desert. It's easy to forget that when you look at the lush, semi-tropical plants growing in the neighbors yards. Having spent 12 years living in New Mexico, though, water consciousness is part of my fiber. I may not have had to ask what the water source was when I bought my house here, but I tend to distrust the endlessly sunny skies. Where's the water going to come from? After 5 years or so of drought, we were sorely in need of the rain that has fallen this year.

The other thing I take note of when I'm out and about is what's blooming and growing, and what changes might be occurring. For instance, I finally got out to the back yard to dismantle the trellis which had been holding up my Cecil Bruner climbing rose. It had collapsed in the rains - the bottoms of the posts rotted out. After dismantling this thing, I decided to trim back the rose itself, as it was bending quite severely. (It had been....well, let's just say that it had been a while since the trellis had collapsed.) Anyway, in lopping off the old, dead wood and some of the larger branches, I noticed that there were new leaves - young and red - sprouting.

I love when nature captures my eyes. Those young leaves were a reminder of the season here in San Diego. We would not have gotten them for several more months in New Mexico, but here, it's rainy season, and that's when things often get going. The other thing that gets going is wild mushrooms. They are springing up in some of my flower pots and on some people's lawns. I have learned to identify 2 types of wild mushrooms - boletus and inky caps (or shaggy manes). That's it. I wouldn't attempt to pick any other kind, unless I had a mushroom ID book - I've heard the stories... And here in San Diego, I haven't attempted to pick any, not having seen either of the two in my repertoire.

Until today, that is.

I was headed back and striding past a large old tree when I spied them. I veered off the path and walked over to a cluster of mushrooms growing through the leaves. I stuck my finger under the caps and rubbed the gills. When I looked at my finger, it looked like I had just rubbed it across a puddle of that old fashioned black india ink. The shape and color was right, and there was the ink. I looked around and saw several more clusters. I picked the best ones I could find and headed home.

With the help of some beef broth, an onion, some leftover quinoa, the remains of the carrots I had bought at the farmer's market, some baby spinach and one portabello plus a few dried porcinis, soaked first in boiling water, I had a delicious, rich soup. The inky tops turn the broth darker - a perfect compliment to the darkening skies. And a lovely way to extend the odds and ends in the fridge, creating several more meals.

One last note: If you aren't sure whether or not a particular mushroom is poisonous or edible - DO NOT EAT IT! There are good mushroom ID books out there, and there are groups of mushroom freaks who love to gather together to discuss and forage. Most mushrooms won't kill you, but it's not an area to tinker about in. For instance, the kind of inky cap I picked today has a nickname of "alcohol inky cap". Why? Because it has similar properties of Antabuse. In other words, it would make me feel quite sick if I consumed alcohol within 2 days of having consumed it.
Posted by Toni at 9:24 PM

i've been loving the rains the past days... btw,i have a confession to make, and yeah even if i will look stupid for saying this... oh well pardon the ignorance but i really didn't know that san diego is a desert until i read it in this post... haha! because you're right, i would never suspect that it is a desert because of the lush around! thanks for the info.

Great post on mushrooms and the enviroment. We spent some time in San Diego a few years ago and loved Southern California for a lot of reasons. Our country has such diversity that I will never get tired of it.

Malou - Yes, it's easy to forget that we're in a desert. But when you think about how seldom we get rain....well, that's a good clue!

Penny - Isn't the diversity amazing? I've traveled across this country and it never ceases to amaze me how rich and diverse it is.