Lox, because I can 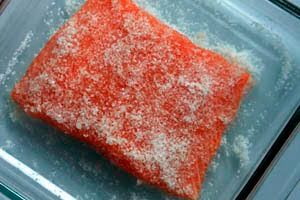 When I was growing up on Long Island, lox and bagels were standard Sunday morning breakfast. Sometimes we would be treated to smoked whitefish too, but lox was a given. That and the Sunday New York Times. My parents would disappear behind the paper while my brother would either be teaching me some math he had learned (he was 2 years ahead of me in school), or we'd finish our bagels and head off to the basement where he'd be building his latest radio.

When I was growing up I never gave a thought to where lox came from, because I knew where it came from. It came from Max's delicatessen. That's where all the best stuff came from, including the best stories. It was kind of the central point of town, and every one of my parents friends shopped there, and everyone had their own funny story of what happened that day at Max's. Max was a character, to say the least. To begin with, Max was not actually his real name, but when he bought the store sometime before recorded history, it had a sign on it that said "Max's Delicatessen". So rather than change the sign, he changed his name.

My favorite story is one which could never happen in today's world, but is indicative of what it was like back in the days when people trusted each other. Max had a policy of giving any cop who was on his beat a sandwich for a quarter. Yes, you read that right - 25 cents. While it's true that everything cost less back then, 25 cents was still cheap enough to not cover his cost, I'm sure. But Max did it anyway. Max also used to yell at everyone who came into the store "Whaddaya want to buy this junk for???" Everyone laughed and Max would laugh too. One day Max looked out the window and saw a cop about to write a ticket for one of his customer's cars which was double parked outside. Max dropped his knife and ran out the door shaking his fist and screaming "If you give my customer a ticket, I'll poison you the next time you come in here!!!" The cop put away his book, and walked away laughing, as did everyone in the store. No one left Max's hungry, and no one left grumpy.

So, back to the lox. We always bought it from Max's, and it was always sliced paper thin, which was just the way we liked it. I've had different versions of it since then, and while I've always loved lox, some is better, and some - while perfectly edible - isn't the best. It wasn't until years and years later, at one family gathering at my brother's house, when my niece Rachael (who is a rock star chef, if you want my opinion) brought gravlox which she had made, that I realized that people actually could make lox. Not only that, but it could be smashingly good. Now, I know that gravlox is lox with a college education, but still, when you get down to it, we're talking salmon which has been salt cured.

Fast forward again to another family gathering (we do love to get together!), this time at my other brother's house in Florida, and my sister in law served lox and bagels for breakfast. It was terrific, and when I asked her where she got it, she said "I make it." (She's from Siberia.) "You did?" "Yes. It's seeemple. You just take 3 tablespoons salt to one tablespoon sugar. You mix together and then rub all over salmon. Cover it and leave it on counter over night. In the morning, there will be water in dish. Dump out water, wash salmon, take paper towel and dry. Rub a little olive oil on it and put in refrigerator for 3, 4 days. You have lox."

I've been making it ever since. I miss going to Max's and hearing him shout at everyone. But at least I can have lox any time I want - even on a Tuesday.

One Note: Use the fattiest lox you can find - it's better.
Posted by Toni at 1:01 PM

Email ThisBlogThis!Share to TwitterShare to FacebookShare to Pinterest
Labels: lox

You know I am smiling as I read this, because this was my experience growing up in New York, too. Lox came from a store, bagels from the bagel bakery across the street from my grandparents' house, and there was always The New York Times. And, on occasion, this is exactly the Sunday morning in my household today.

Yes, Lydia, I try to make this my Sunday mornings as well. The biggest difference is that these days I get the Times online.

I get the Times online too. Unfortunatly I never experienced the lox and bagels tradition. Love your remembrances. We did have a salmon frittata this Sunday if that is close enough.

Any kind of frittata is perfect for Sunday breakfast, Penny! I've never put salmon in a frittata before - thanks for the idea.

But...one thing...you should leave it in the fridge, NOT on the counter. (OMG, really Mila? I'm sure that is okay in Siberia, but not in Florida where it is all warm and damp or in SD. Oy!)

I had no idea lox was so easy to make. I do miss a bagel with lox, cream cheese, and sliced tomato from my local bagel shop. Since moving away from NYC, I haven't found a comparably suitable equivalent. Thank you for sharing.