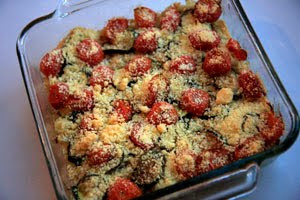 When I was in my 20s, I moved into my own apartment for the first time. My mom bought me a set of cutlery, as well as some glasses. Someone gave me a copy of "The Joy of Cooking", and I bought myself "The New York Times Cookbook", written by Craig Clairborne. Another friend came over and laid down new brick colored vinyl tiles in my kitchen, and the pots and pans were salvaged from an assortment of friends and relatives. When I was in my 20s, my cooking came from cookbooks, with additional help from my nose. I would open each jar of herbs and spices, give each a sniff and think "yes" or "no" about including them in the dish I was making. It was just a little scary, deviating from the recipe before me, but somehow I trusted my nose, and the dishes were usually quite edible.

When I met my husband and moved to New Mexico, I rarely got to cook. Bob loved cooking, and I was his sous-chef. He would tell me what he wanted chopped or sliced, and I would watch as he deftly maneuvered pots, pans, water, oil, various meats and vegetables. He opened jars of spices and threw handfuls into the pot without ever sniffing them. Then he'd walk over to the fridge and look into the door compartments or the bins below the shelves for something he might have forgotten. The first time I saw him cook, it was also a little scary. He was so brazen with his use of herbs and spices, I imagined that the outcome would be more than my palette could handle. He never followed a recipe. His food is what truly won my heart.

From Bob I learned to start with what I've got in my fridge. I learned not to be shy with my ingredients. That garlic needn't be doled out in half teaspoons, and that mushrooms could be thought of as an herbal addition to other veggies instead of being used as a vegetable dish. And I learned about prinicples - that if a recipe called for lemon, for instance, and I didn't have any, I could use a bit of vinegar instead. It would give me that sour taste. Or that beer was a perfectly good liquid to add to a stew, even if I didn't drink it as a beverage.

Now I live on my own again in a small house, and create meals which I can use all week. I start with what I've got in my fridge because shopping for food trumps shopping for clothes in my book, so my fridge usually has interesting ingredients. I love my farmer's market and the organic produce I get at various markets. With a few fresh ingredients and a little imagination, I now find it easy to throw together a dish which can satisfy for days. This one was made with the skills I learned from Bob and it had organic zucchinis and cherry tomatoes, onions and garlic, herbs, rice, and peccorino-romano cheese sprinkled liberally on top. And I ate it with a fork which I still have from my first apartment, on a plate which I inherited from my mom. 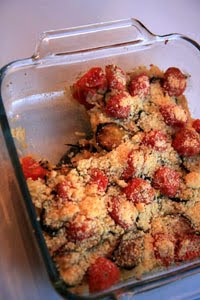 The evolution of a cook. I have gone through phases too. I now love improvising with what I have on hand. Love this casserole.

Toni, that is simply beautiful. Wish I could have had one of those forks and sat down with you!

So much passion in cooking :) I've only started to love cooking, hope I'd get as good! hehe. That just looks delicious, by the way. Good job! :-)

Ah, you have kept the best of the past and combined it with the best of who you are now. I know exactly what you mean about evolving as a cook, moving away from recipes to being more ingredient-led. It's much more fun to cook when you know instinctively that some things will work, even if you've never made the dish before.

Enjoyed reading your post and your reminiscing about your hubby and his cooking style; I think we learn from others and evolve constantly which is why cooking is such an interesting occupation!

Penny - Yes, I've noticed that you improvise with what you have on hand. A kindred spirit!

Tanna - I wish you could have sat down with me, too...

Amy - Thanks for stopping by my blog! Just keep at it and you'll be churning out phenomenal meals in no time, I'm sure...

Lydia - Yes, there is something to be said for getting older - we get to use our experience!

Joumana - Yes, I think that anything that's creative can hold our interest for a lifetime, because we give ourselves the freedom to constantly evolve.

This dish plus the fork and the dish = who you are at the moment... such a great combination/ or a meeting of your past and your present.