A Chicken Stew for the end of winter 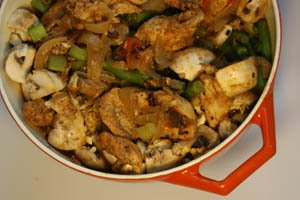 To everything, there is a season. How true. But there are some things which seem to extend themselves from one season to the next. Stews are like that, I think. Mostly they are winter fare, best savored when the cold winds send you indoors. I remember those winters where I grew up on . My brother and I would play outside in the snow until our mother would drag us indoors. We'd tumble inside, pull off our boots and coats and walk into the living room. I can still feel the tingle on my cheeks as I entered a warm home, filled with the aromas of bubbling meats and vegetables. When you've been playing outside for over 2 hours, you have the feeling you could eat a horse. Fortunately, we didn't have to.

But then comes spring, and the time change. Suddenly it’s light at the end of the work day. With this lightness comes a new palette of flavors. Asparagus appears on the shelves of the grocers. Have you ever grown asparagus? We did in . It’s amazing stuff. You need a forest of it in order to have enough to make a side dish. Each root would put out a couple of stalks. That’s it. Perhaps in other parts of the country you’d get more per root, but in , we felt lucky if we got 3 stalks from one root. We’d walk out to the garden and head over to where the roots were buried, and there, poking up like a green telephone pole or two would be these asparagus stalks. So what do you do with 5 or 6 asparagus stalks? Well, you’d add them to a stew, of course!

I still have quite a bit of that berbere mixture I got at the Fancy Food Show. I love the color of it. Anything that fiery red must warm you from the inside. So even though I no longer need a snow suit to go out and play, and even though our rainy season seems to be at an end, I just needed to do something with the last of the asparagus I bought. And that berbere kept winking at me from the corner.

So this recipe isn’t really a recipe. It’s meant to be more of a description of how I pulled together this stew from what I had in the bins and the freezer, as well as a couple of things I bought to round it out.

To my mind, a stew begins with onions and garlic. For this dish, I had some regular yellow onions, plus I found these beauties at the Farmer’s Market. The woman told me what they were called, but I forgot. All I remember is that their Italian. (No wonder they’re so gorgeous!!) Does anyone know what they are? 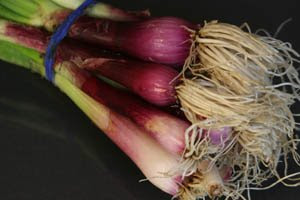 Anyway, I used both kinds, thrown into a pot with some canola oil. Then came the chicken pieces, which I had rubbed generously with the berbere seasoning. When they were lightly seared on the outside, I added some chicken broth, covered the pot and let it simmer for about 15 minutes. Button mushrooms, the remains of a tomato and the asparagus went in last, and as I looked at those last three ingredients, I realized I had the colors of the Italian flag bubbling away on my stove! So what was I supposed to do? Open a bottle of Chianti Classico, of course! Salute! 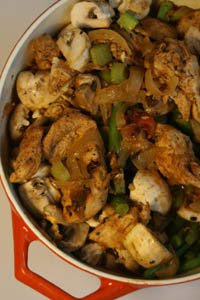 p.s. I have been out of the loop for a while due to an avalanche of new patients at our clinic. This plus the necessity of doing vast amounts of paper work - which I absolutely hate and put off as long as I can - meant that I was in no mood to be writing or doing much cooking. I lived on salad, in fact. But the good news is....... (drum roll, please......) Our website is now on page one of Google! For anyone who googles "acupuncture, San Diego", we will now come up on the first page! It has taken me a little over a year to achieve this, and frankly, it just blew my mind when I saw it last nite. It makes all those nites of staying up to INSANE hours of the morning worth it. For anyone curious about what I do when I'm not in the kitchen, you can go to Mission Valley Acupuncture. Or you can just google us. ;-)
Posted by Toni at 1:34 PM

Congrats on your 'google achievement'!!!

I love to wake up to a sunrise early in the morning. A few days ago it was still dark at a certain hour, today to my excitement I've greeted a new day with a sunrise. It feels so great to watch the sky being gradually enlightened. To me these are very intimate moments - everybody is still asleep, the city is veiled in pre-dawn darkness - and here I am face-to-face with nature. Perfect moment for my morning yoga fix and meditation!

I never think of "stew" and "asparagus" in the same dish, because the asparagus cooks so quickly. But I love the way you built this stew from the bottom up. And the berbere must give it a great flavor, rich and a little bit spicy. Yum.

Early spring. My favorite time of year...well, that and early fall.
I love the promise of what's to come. And I love the way you made your stew. We should all cook from the ground, the season, what's available in abundance (even if the asparagus is sparse!)
Foraging (even at the market) and then cooking is a great pleasure!

Congrats on the biz success. I love Bebere. I make my own blend that I got from Marcus Samulesons book.I put it in everything.

That stew looks great. Plain old white rice to chase the spice, and it's the perfect food.

Those looked like shallots to me, but so many of the alliums look alike.

What a perfect comfort food on a cool rainy day!
That's what stews are for!:)

This is the beauty of seasonal eating for me - I like to look forward to certain ingredients for certain times of year - pumpkins, squash and root veggies in the fall, stews, hearty soups and baked goods in the winter, strawberries and green beans in the spring and all that light fresh eating in the summer!

This is my first time to your blog. You really pulled me in with your writing. I'll be back!

This is a nice way to say good bye to winter and welcome spring. Although, we're year round soup people and eat soup even on hot, hot days! "They" say it's actually good and cleansing for the body to eat hot soup on hot days!
We have not tried to grow asparagus yet. But will one day. You lived in New Mexico? Wow, so pretty there!

Anya - If I could only get to bed at a reasonable hour, I would love to get up for sunrise! I used to do that in New Mexico. Sadly, this city life makes for a very different schedule.

Lydia - I think of stew as being a repository for whatever I've got around. You just have to throw the ingredients in at different times.

Catherine - I agree with you on the seasons, and am a great believer in foraging!

Coco - The berbere I use is from Marcus Samuelsson. When I run out, I plan on creating it from the list of ingredients on the package.

Heather - Plain ol' white rice works for me. And they aren't shallots - they look like a purple scallion, actually, but one that was fed gargantuan food.

Valentina - Yes, that's what they're for!

Jenn - Seasonal eating is one of the basic principles of macrobiotic eating. I don't follow that diet, but I like the principle!

Carol - Welcome to my blog! Thanks so much for the compliment, and I hope you stop by again.

Diane and Todd - I think it's the same principle as eating chili in the summer. It makes you sweat, which cools you off! Works for me. ;-)

This looks so good! Really warm and hearty. I found you through your post an Simply...Gluten Free, I write a blog where I review lots of gluten free items, as well as recipes, dinning, shopping and my own celiac experiences, http://deliciouslygf.blogspot.com/

I'll try paring this down for just me.

A fitting dish to say goodbye and welcome!

Dude, those look like ramps to me. Do a google image search on ramps or wild leek, and see what you find. Ramps are very trendy these days.
The stew sounds delicious!

This sounds lovely, Toni! And now you've got berbere on my shopping list the next time I head for the Spice House. And even though the calendar says almost spring, it's going to be stew weather for a while to come, at least here in Chicago.