What has come over me? I'm BAKING! 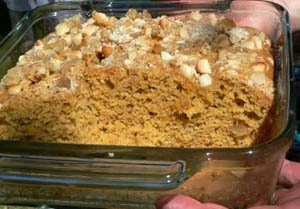 I don't know what's come over me. I seem to be channeling someone else - like Patricia over at Technicolor Kitchen, for instance, or Valentina at Sweet Temptations. I don't know who is inhabiting this woman's mind these days, but whoever she is, she sure likes to eat sweet things! Last time it was the towering chocolate cake. This time it's a mango-gingerbread with macadamia nut streusel. Whaaaaat?

It all began when Boaz, over at Folding Pain invited me to join a group he formed called the San Diego Bread Lovers. They formed out of another website called The Fresh Loaf, when a small group of them on that site discovered that they lived here in San Diego. They decided to get together once a month and share a bread they each baked. This month's theme was bread with nuts. Well, I missed the first 2 meetings, but I thought it might be fun to meet these people, just to touch base with people who are into baking bread. I pictured them as a jolly bunch, these people who play with flour and yeast and such. In my mind's eye I saw them with aprons on, hands a little dusty from flour, and an endless twinkle in their eyes. After all, isn't baking bread about participating in the most fundamental form of nutrition? In one of my first posts on this blog, I wrote "The food which has sustained humans since biblical times, the food which has always been thought of as synonamous with food itself is bread." So I figured I was about to meet a group of people who just..........well........liked bread!

Imagine my surprise when I encountered a group who not only enjoyed the taste of good bread, but who were all quite versed in the science of bread. These people were conversing on the relative merits of different acids used in making a bread which contained baking soda, as well as distinguishing between doughs which had their fermentation retarded in the fridge and those that didn't. Quite frankly, I felt like I had dropped into a PhD level class, and no one noticed I was really a freshman, crashing the course! One thing I know for sure: If I continue meeting with this group, I will most definitely learn a lot!!!

I'm grateful I didn't attempt anything more rigorous than this quick bread. I got this recipe off of epicurious - my go-to site when I grow tired of my cookbooks. The recipe was easy enough, and I was able to make it the morning of the meeting. I chose it in part because one of the patients at the clinic had given us a humungous box of raw, unshelled macadamia nuts. Have you ever seen a macadamia nut in it's shell? Well, I hadn't before, and they're all gone now, so I don't have a photo to share with you. But they look like malted milk balls. Truly! They're brown, and smooth, and round. Check out the Kitchen Notes below for instructions on how to deal with unshelled macadamia nuts, as well as the outcome of this meeteing for me.

As for ginger, it is a spice we use often in Chinese medicine. It is considered sweet and spicy, and it benefits both the lungs and the digestive system. The official name of this is Zingiberis Officinalis, and the edible part is commonly called the "root", although it is actually a rhizome. Historically, those who used the plant medically called it "Jamaican Ginger" in the western hemisphere. It actually will help increase the production of saliva and bile. It is contraindicated in people with gallstones for this reason. It has been used for nausea for many years, including the nausea of seasickness, chemotherapy and pregnancy. Ginger contains volatile oils which have antibiotic properties.

As you might have guessed by now, this will be my entry into the Weekend Herb Blogging event, hosted this week by Ramona over at The Houndstooth Gourmet Now, this recipe is decidedly NOT for the carbophobic, but for those who still want a little sweet taste in the morning, it makes for a delicious breakfast!

For streusel:
Stir all ingredients in small bowl to blend.

For gingerbread:
Position rack in center of oven and preheat to 350°F. Butter 9x9x2-inch metal baking pan. Whisk first 6 ingredients in medium bowl to blend. Coarsely puree mangoes in food processor. Transfer 1 cup mango puree to large bowl (reserve any remaining puree for another use). Add buttermilk, oil, and eggs to puree; whisk until blended. Add flour mixture; stir just until combined. Transfer half of batter (about 2 cups) to prepared pan. Sprinkle half of streusel over. Spoon remaining batter over, smooth evenly with spatula, then sprinkle with remaining streusel.

Bake bread until springy to touch and tester inserted into center comes out clean, about 45 minutes. Cool completely in pan on rack. (Can be made 8 hours ahead. Cover and store at room temperature.) Cut bread into 9 squares and serve.

Baker's wisdom: Buttermilk and baking soda help give the gingerbread a tender texture. 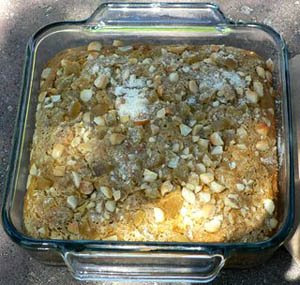 Kitchen Notes: As it turns out, my instinct to roast the nuts first was correct. Someone in the group told me that they would have been much more difficult to shell if I hadn't. As it was, I wrapped the nuts in a kitchen towel and took a hammer to them. It was a slow process, but it worked.

As several of the reviewers on epicurious commented on the need to add more ginger, I did it in 2 ways: I added a half tablespoon more to the bread itself, and I was generous in the amount of crystallized ginger in the streusel. This recipe only works if you like ginger! For those who are shy about this particular spice, you may cut back on it. I also cut back on the amount of sugar - to slightly under a half cup. I decided that the mangoes and the ginger were sweet enough - which they were.

The other outcome of this gathering was a trip to Borders. Someone had given me a gift certificate, and I had forgotten about it. (Don't ask. I've been busy!) After the meeting, I wanted to buy the book that seems to be the seminal one on bread: Peter Reinhart's "The Bread Baker's Apprentice". I must say, it's a gorgeous book, with clear instructions. Will I find myself transforming water and flour into mouthwatering bread on a regular basis? I have no idea. But I'm certain I've just added a world-class book to my cookbook collection. And I'm equally certain that anything I make out of this book will be superb. Stay tuned.

Goodness, Toni, if you're starting to bake, who's next? Me???

Well, all I can say is that you made me drool over here with your gingerbread! Especially for using macadamias, I love them.

I'm honored to mentioned by you, dear Toni. And I hope there are more baked goods around here in the future!

Wow, Toni, what a fantastic start!!!! I'm glad you got stung by the baking bug!
And like Patricia, I'm honoured & touched that you mentioned me. Please keep it up, you're just wonderful. And I'd like to have a slice please.
No, 2.

I don't consider myself a baker, so when I make something that turns out good, I'm so pleased with myself! Thanks for entering this delicious recipe into Weekend Herb Blogging.
Ramona
The Houndstooth Gourmet

I love gingerbread! And I still have some crystallized ginger lurking around from Christmas... Hmmmm
Macadamia nuts, though, that would be a challenge...
Looks lovely! Perfect for breakfast... I love sweets for breakfast!

Patricia - If I can make YOU drool, then I am the one who is honored!

Valentina - Thanks! Your sweet temptations were just that - too tempting!

Ramona - I know what you mean. I don't consider myself a baker either! It's absolutely shocking when something comes out!

Katie - I'm sure you could find a different nut that would work just as well. This bread was truly moist - a wonderful accompaniment to some cafe au lait...

Ok, I can't believe you found macadamia nuts in their shell! You've got to haunt that store so that you can get more.
I think that's a brilliant idea to use macadamia nuts in a streusel. I'm going to try that.

I like ginger quite a bit...I bought something called ginger beer. Have you heard of it? It's not so good.

I think they call it (bread)baking-mania! :) Firstly, I wanted to bake french bread according to the recipe you so kindly had forwarded to me earlier. My heart sank when I understood I couldn't find shortening in any of the grocery stores this weekend (I'll be after it until I snag it, anyways!).

And as far as I got a 'back-up' option in a view of soda bread I went for it and my heart got rejuvinated again. You're right about buttermilk and soda (two of the four ingredients for irish soda bread) giving a light texture to the dough. It literally melt in my mouth when I chewed on my slice. ;) If interested, there is a link to the recipe:

Macadamia nuts look like malted milk balls? lol. That's a fun mental image! That sounds like the best bread group ever. I hope you'll be sharing your new-found baking wisdom with us as time goes on!

Just the most perfect recipe! Everything here I love. I love love love ginger. And macadamia nuts! Good advice on the roasting before pounding away!
Great job! Way to step out of your comfort zone and have great success!

Ann - I'm trying to catch up to this group - they're amazing!

Catherine - Yes, I've definitely stepped outside my comfort zone. But I do that. I mean, why not?

Mango in gingerbread sounds like paradise! Please cut me a hunk for my cup of tea. Just perfect!

What a fun group to join! We look forward to some of your bread baking wisdom!