Noodle Kugel and Lawrence Ferlinghetti on a hot night 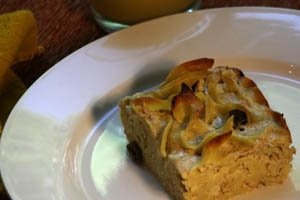 It's hot. It's bloody hot. Last week, it was cool, cloudy, and even kinda misting. Now my plants are fainting and my cat is passed out on the bed. In years past, we used to refer to "May gray" and "June gloom". These were not bipolar months. These were months that knew what they were about -- they were there to remind us that summer's sun was still just out of reach, and that the plants had one last shot at moisture before the summer dry season. 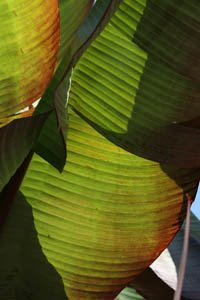 So when I was planning the party I was going to throw for my neighbor, who turned 93 this past Wednesday, I was envisioning the whole thing taking place indoors. I saw the neighbors gathered around the island in my kitchen, happily eating and drinking and sharing stories, while Mary, at 93, sipped on her martini. (I think it's her secret to longevity!) And then the heat struck. 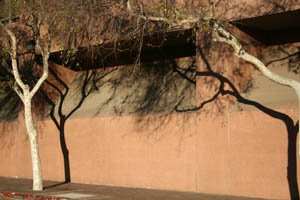 It's a good thing I had been working on the stone path outside. At least people could walk around without having to avoid the gap between the path and the garden, which had a couple of bricks and stones strewn among the tree roots. At least I finished that part, and all I had to do was rake the dirt to a sorta- kinda level, and borrow some chairs from one of the neighbors. At the last minute I discovered that there would be 11 of us (instead of the original 8), and then a woman showed up at the gate who was the niece of a long-time friend of Mary's, making it 12.

The greatest joy of this party was two-fold: Mary's delight in being surrounded by friends, and my increasing sense of belonging to this wonderful community. I live on a short block which ends in a cul-de-sac, and everyone knows Mary. At 93 she has all her marbles and a wicked sense of humor. People brought salads and wine and stories to share. The woman who showed up late brought a book of Lawrence Ferlenghetti poetry and read one by flashlight for Mary. We all applauded when she was done.

The food was the kind which could be enjoyed hot or cool. The martinis were definitely cold, as was the white wine. Not knowing everyone's eating habits, I always have vegetarian food as well as something with chicken. This time I made a couple of pizzas with chicken marinated in an ancho chili and raspberry sauce (it was too dark to photograph by the time the pizzas came out!), as well as the Spinach Ricotta tart I had posted here back in April. And then there's this dish, which, if you're lucky and have any leftover, makes for a terrific Sunday breakfast! 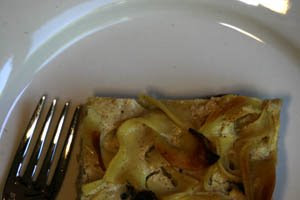 Boil the noodles in salted water for about 4 minutes. Strain noodles from water. In a large mixing bowl, combine noodles with remaining ingredients and pour into a greased, approximately 9-by-13-inch baking dish.

Bake until custard is set and top is golden brown, about 30 to 45 minutes.

And here is the poem which capped off our evening:

Yes, the weather is really going funny lately. Today, for instance, it's 26 degress C over here, on wednesday the weather men say it's gonna be only 9. Such temperature fluctuations within a few days. Brrr.

The party you threw for your long-lived neighbour sounds so good and cosy!! And fully delicious too!

I fell in love with Ferlinghetti during my college days, and his poems still speak to me. How lucky your neighbor is to have such an active life at 93, and how lucky you are to have such a caring community of neighbors.

Our heat wave is just starting to pass - I think it's supposed to be in the 60s this week? I wish I'd had that kugel last weekend, instead I had to order pizza. :)

Happy Birthday to the young lady!

Love the poem...he's a favorite.
Try Gary Snyder, too.

What a nice nice nice friend you are to make such a lovely dish.

Give me a heatwave! What a lovely party. I hope Im alltogether at 93 sipping martinis. Yes the watermelon ones would have ben perfect!

Highlight of my teen life: meeting LF in SF at City Lights Books (had a high school teacher who taught his poetry in 1960, in Maryland). His work still speaks --- hopefully even to this year's teens.
Kugel -- my mother's wasn't sweet, but that's what I see in recipes. Always to good.
Lovely neighbor: would she consent to a photo posted?

Anya - The party was terrific - you should have been here!

Lydia - Ferlinghetti was everywhere during days as an English major in college. How lucky we were to have found him at that impressionable age! And how lucky I am to have such a great community around me!

Heather - Well, I had made some pizza, too. Not a bad way to feed yourself, I think!

Catherine - Love Gary Snyder as well.... If you knew Mary, you would have pulled out all the stops and made a bunch of goodies as well. She's an inspiration!

Courtney - A new photo! I think our heatwave is over. Hopefully, we sent it on to you!

Susan - Funny you should have met him there. One of the neighbors who was at the party had met him at City Lights as well! Unfortunately, he wasn't there when I went there back in the 70s.

Strangely enough, my mom never made kugel. I had it at other people's houses, and it was always sweet and always delicious!

I'm still laughing about your cat passing out on the bed! Yeah, it's been hot, now today it's cold. The weather in Southern California is freaking out!
Wow, 93 years is an amazing life. Her story is inspirational as well aw this noodle kugel. It's a new one for me. Thanks!

love the dish! but I am having trouble saying "noodle kugel" 10 times fast!

Noodle Kugel....never had. Looks quite satisfying! :)

93 and drinking martinis...I want to be that vision one day!

Todd & Diane - Yeah, the weather's been schizophrenic of late. Now that it's gray and cloudy, the cat is awake and in need.....

Jaden - Oh no! You didn't try that one, did you? You might have to see a tongue therapist! ;-)

Wow, Toni. All I can say is wow. I just forwarded that poem to a bunch of people in my email address book. So profound and touchingly beautiful. Thanks so much for sharing it. Thanks also for sharing the story about he party! Sounds like a wonderful community you live in, surrounded by great people. Thanks also for the kugel recipe. I have been wanting to make one for a while.

It's been really hot here in the past few days also and the summer months are not even properly here yet. Barbados is parched, we need some rain :(

I love kugel! I've never seen it served anywhere outside of my mother's kitchen growing up, so whenever she made it, I always ate more than my fair share. I think I need to make this soon--its been a long time!

The kugel looks really delicious. I've only made kugel once, and it was a disaster.

Sounds like the perfect party (icy martinis) capped by a beautiful poem. I hope that I am that good at 93... or even 73...

Jenn - Glad you were captured by the poem as much as I was. It truly made the party special.

Mike - Funny thing that my mom didn't make kugel. I don't even think my aunt made it. She made a wicked blintz, but never kugel. So once I tasted it, I was hooked!

Emiline - believe it or not, this was my first attempt. I was pleased by it, so give this recipe a whirl. You won't regret it!

Found in a parking lot (on a car) in Brattleboro VT: HOWL! I (heart) City Light Books. Just following the Zeitgeist...