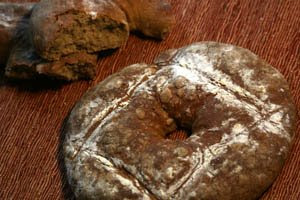 For our last meeting of the San Diego Bread Lovers, the theme was rye bread. Now for me, rye bread means New York Jewish deli rye. Not only the kind with caraway seeds, but the kind you can only really get in New York. Trust me on that one. Even if they call it New York deli rye elsewhere, it doesn't taste the same. But I had been given a gift certificate to Borders and I had used it to buy Peter Reinhart's The Bread Baker's Apprentice. In it are some of the most drool-inducing photos of breads I've ever seen. So when I saw the photo of his sunflower seed rye, I decided I would give that one a try. Aside from the substitution of sunflower seeds for caraway seeds, I loved the shape of this bread and thought it might be fun to bake something round, with a hole in it, that wasn't a bagel.

I have to share one quick fact with you before I get on to the recipe. I know that the common wisdom these days says that if you want to lose weight, cut out the carbs. Don't eat bread, potatoes, pasta, etc. First of all, since I started baking bread, I've lost 2 pounds. I'm not on a diet, and I think I would have lost more if I had had the time to exercise more, but nonetheless, the scale says I'm 2 pounds lighter. At first I was shocked by this. How could I be eating more bread and losing weight? Then I thought about it. Have you ever been to France? To Italy? Do you see those people counting carbs? Are they fat? How come?

I have been saying for years that the biggest reason why America is the fattest country on earth is because of petroleum. It's not carbs, it's petroleum. How's that, you might ask? Well, we tend to get into a $25,000 car, move it 4 blocks to buy a $5 chicken. In any situation where we might be using our own muscles, we use something that uses petroleum to do the job for us. Hell, we'd rather get on a treadmill at the gym than go for a walk! To put it another way, we'd rather use a machine that aids our legs in moving, than just use our legs. Or we'll take an elevator to go up to the 2nd floor instead of the stairs. The examples are legion, the results are the same: weight gain.

Now go back to the question I asked above: How come Europeans, who don't count carbs, aren't fat? One big reason is that gasoline has been at least $6 per gallon in Europe for a long time. I haven't been there in a while, so it might be much more than that now. But at that price, people don't casually jump into their cars and go 2 blocks to buy groceries. They walk. And in more rural areas, there's always the bicycle. And they don't tend to drink diet sodas (those make you hungrier, by the way, so that you'll wind up eating more), and they definitely don't eat sugar free or fat free foods! They eat real food, with carbs, they drink wine, and they're not fat.

OK - I'm off my soap box now. Time for the recipe!

1. The day before making the bread, make the soaker by stirring together the coarse rye flour and water in a small bowl. The rye will soak up the water quickly, but it will all hydrate. Cover the bowl with plastic wrap and leave it out overnight at room temperature.

2. Also the day before baking (or up to 3 days before), make a firm starter. (If anyone wants the recipe for this, just email me and I'll send it to you!)

3. The next day, remove the starter from the refrigerator 1 hour before making the dough. Sprinkle a little flour n the counter and transfer the starter to the counter. Cut it into 8 to 10 pieces with a pastry scraper or serrated knife. Mist with spray oil, cover with a towel or plastic wrap, and let sit for 1 hour to take off the chill.

4. To make the dough, stir together the flour, salt and yeast in a 4 qt. mixing bowl (or in the bowl of an electric mixer). Add the soaker and the starter pieces and then slowly add the water, stirring with a large metal spoon as you do (or mixing on low speed with a paddle attachment), until the ingredients form a soft ball.

5. Sprinkle flour on the counter, transfer the dough to the counter and knead the dough (or mix on medium speed with a dough hook). Sprinkle on bread flour (not rye) as needed until the dough feels soft and supple, tacky but not sticky. Try to accomplish this within 4 minutes by hand or machine, to avoid overmixing (rye flour gets gummy if mixed too long). Add the sunflower seeds by gradually working them into the dough within the next 2 minutes. Total mixing time should not exceed 6 minutes if possible. Lightly oil a large bowl and transfer the dough to the bowl, rolling it in the bowl to coat it with oil. Cover the bowl with plastic wrap.

6. Ferment the dough at room temperature for 90 minutes, or until it doubles in size.

7. Sprinkle flour on the counter and gently transfer the dough to the counter, taking care to minimize degassing of the dough. divide the dough into 2 equal pieces and gently form them into boules. Let them rest on the counter for 5 minutes and then shape them into a couronne by poking a hole in the middle of the boule, and then gently stretching into a large, circular doughnut shape. Lay the dough on the counter, and use a small dowel to press a square shape around the central hole. Lightly sprinkle flour over the top to prevent the depressions from closing. Transfer the dough to a sheet pan that has been lined with baking parchment and misted with spray oil. Mist the dough with spray oil and cover loosely with plastic wrap or a towel.

8. Proof the dough at room temperature for 60 to 90 minutes, or until it increases to about 1 1/2 times it's original size.

9. Place a pizza tile on a rack in the middle of your oven and an empty water pan on a rack below it. Preheat to 500 degrees.

10. Generously dust the back of a sheet pan with semolina flour or cornmeal and gently transfer the dough to the pan. Slide the dough onto the baking stone (or bake directly on the sheet pan). Pour 1 C of hot water into the steam pan and close the door. AFter 30 seconds, open the door, spray the walls with water, and close the door. Repeat twice more at 30 second intervals, then lower the oven setting to 450F and bake for 10 minutes. Check th breads, rotating them 180 degrees for even baking. Lower the oven setting to 425F and continue baking until the loaves are golden brown. This should take 15 to 25 minutes longer.

11. Remove the loves from the oven and cool on a rack for at least 1 hour before slicing or serving.

If I made this bread again, I'd skip the transference to the baking sheet with the parchment lining, and transfer them instead directly to the back of a sheet lined generously with cornmeal. Transferring twice just increases the chances of degassing, which means your bread will not rise as much as you would want it to.

LOL. Now, now, you can't discount the fact you're naturally ( and blessedly) slim too...and quite active to boot!

That said, I agree, bread is our friend. Yipee for carbs! :-)

I am super-duper impressed with your results and dedication...that loaf looks divine.

Brillant points. Just today My 'Carb' nazi aunt whos very svelte and active and I were just discussing this. Howevershes avid about her carbs. Shes concerned about my wieght gain over the past year. I just need to walk more like I used too when I lived downtown. But I could never deprive myself of carbs.Your breads are gorgeous!

I ABSOLUTELY agree on your 'carbs' concept!!

Hear hear Toni! I'm no skinny mini, but I know that I am in better shape than most of my neighbors. Why? Because I use public transportation and walk, walk, walk in a neighborhood of Brooklyn that may as well be the suburbs.

The two big local controversies this month have been the placement of new stop lights that don't allow people to drive as fast (most of my neighbors are anti, naturally) and the "no go" handed down to a farmer's market by the big church because they're worried where people will park if there's vegetables in the parking lot (and mind you, the market was planned for a Saturday! At a Catholic church!)

Sigh... My neighborhood is chockablock with obese people, and sadly there's no good rye bread to blame. Thanks for the recipe. I haven't had a good sandwich on rye in eons!

Rachael - I've never discounted genetics. But I wasn't really talking about me. I'm talking about the carbophobia we've developed as a nation. I know the science behind it, but I'm not convinced that our national obesity is carbohydrate-fueled.

Courtney - Exercise is definitely key, as well as portion control. What that translates to is the fact that you just can't eat the whole loaf!

Ann - I KNOW you're a walker! I read your blog regularly and wish I could walk with you and Isaac.

As for the Farmer's Market - that's hilarious! Where would people park if there's vegetables in the parking lot? Well, how about just east of the rutabagas?

Toni--A great post! You hit the nail on the head with the walking issue. Weight control comes down to this: Burn more calories than you consume. Period.

Like New York, Chicago is a great city for walking. I think two things make that so. First, there's good public transportation [to be gotten to by walking, of course]. Second and even more important, the critical mass of population and services makes walking not just recreation but a valid form of transportation. You can walk to the grocery store, the dry cleaner, the video store... In cities where this isn't the case, you take a walk as a thing to do, instead of walking to get somewhere. It's much harder to be motivated to do the former. When we lived in St. Louis, there was a video store two long blocks from our house; when I'd suggest getting a movie and Marion asked if I wanted to walk to the store, I would answer with an indignant no. Now living in Chicago, a five or ten block walk to run an errand is just getting warmed up for us.