I have a friend who recently moved to San Diego from Seattle. Now, having been to Seattle, I understand that the definition of "foodie" is different in that city than it is in this one. I'm thinking now of Pike Place Market, and just the thought of it is making my mouth water. I had never seen a market like that in my life before visiting a friend who lived in Seattle. Wandering through stalls which offered fresh morel mushrooms next to piles of the freshest herbs and veggies was heaven. And of course there was the flying fish. My friend and I picked out a fish for our dinner that nite, the man scooped it off the ice and tossed it to someone behind the counter while screaming something like "incoming salmon!!" The man behind the counter looked up at the last minute, raised both hands just in time to catch that sucker. The miracle was that he didn't drop it! For those of you who have been to this market, you know what I'm talking about. For those of you who haven't, you have a good reason now to go to Seattle. Seriously. It's worth it for the entertainment value alone, let alone the quality of the food.

Anyway, my friend found a downtown loft which he liked and moved in. For a serious foodie, I'm amazed that this loft suits his needs, as the kitchen is incredibly small. But he assured me that since he's spent lots of time cooking on boats, it didn't matter. And judging from the meal he produced that nite, I would have to agree with him. I am working on getting the recipe and will post it as soon as I've re-created it.

But in the meantime, he made a rice dish which sent me into orbit. My relationship with rice has always been a pleasant one. Sometimes it's the perfect background for a spectacular entree. Sometimes it has a bit more personality than that and can share the stage as a supporting actor. I don't know why this particular version of rice hit a home run with me. Maybe it was the fog that was coming in, making the sweetness of the dates feel so comforting. Maybe it was the Cline's Zinfandel we were drinking. Seriously good Zin for $7.99 at Trader Joe's, and more expensive elsewhere.

But whatever it was, the rice dish stuck in my mind, so I decided to try to re-create it. There's no recipe here, of course, just some guidance and possible ingredients. And even though it amazes my sister-in-law, I never measure my rice or my water. I just pour some rice into the pot and cover it with water to about 1/2 - 3/4 of an inch above the rice. Then I bring it to a boil without the lid, turn the heat down and put the lid on. It seems to work every time. 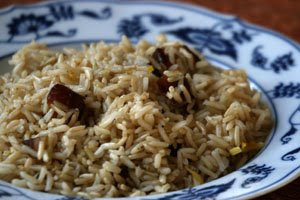 Brown Rice With Dates and Lemon

Cook the rice in the usual manner, adding the chopped dates and lemon about half way through the cooking process. When the rice is done, fluff with a fork and sprinkle some seasoned rice vinegar over it. Toss and sprinkle some more so that all of the rice will have a little of the vinegar. It won't make your rice soggy, just tasty. Grind some fresh pepper and toss.

Now, if you're like me, there are times when you don't feel like eating a whole dinner. Sometimes you just want to graze. (I'm a champion grazer!) I've had days like that recently, and I've just eaten some of the leftover rice and nibbled on these incredible olives from Whole Foods. 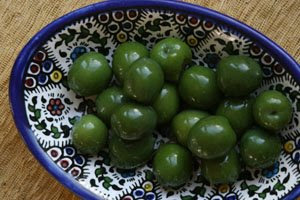 They're called Castelvetrano, and they have (temporarily, at least), replaced Luques as my faves. If you can find them, I highly recommend them! 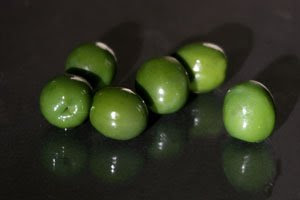 Simple is just good. Must try the vinegar on rice thing!

I have to try this. It's the second recipe I've seen in the last two days with citrus. The concept is driving me crazy; I think it'd be out of this world with lamb. Thanks for the post.

Tanna - I seem to be putting seasoned rice vinegar on everything these days!

Tiki - I agree with you - it would be terrific with lamb!

Mmh, vinegar in rice, with dates and citrus. This sounds right up my street - I love culinary adventures!!

The photos are so tempting, btw!! Do you use different lens now?

This is the kind of dish that agrees with me, delicious and not a brain surgery :)

This rice dish sounds wonderful! I am eating a lot of rice these days in China :)

Anya - No, I'm using my old one which was repaired. And speaking of photos - the ones on your latest post are absolutely my kind of photos!!! Love them!!!

Monica - I agree! Delicious and even possible to do after work.

Carol - I'm sure you are eating lots of rice! I'm hoping you avoid gluten in the sauces.

Yeah, PIKE Place Market is amazing. You have to come to the Caribbean and experience one of our markets too :)

Cynthia, I'd LOVE to!