The days have turned hot enough to warrant shorts for a hike, but the night time and mornings are cool enough for a sweatshirt. I go out for a run/walk these mornings and smell toast and coffee coming out of the kitchens in the neighborhood. Why is toast such a comforting smell?

I jog through my serene neighborhood and pass people walking their dogs. The liquidamber trees are finally red. Occasionally I will pass someone talking on a cell phone, or a car will drive by with it's driver on her way to drop the kids off at school. But other than that, it is quiet. It almost feels as though the world is holding it's breath, waiting for something to happen.

Twenty years ago today, something did happen. The Berlin Wall came down. I've been listening to the radio all day, and there have been stories of people who were there, walking from east to west in amazement. It didn't seem possible. One young couple who had already fled to the west found themselves like salmon swimming up river. They were heading to the east to tell his parents that they were going to be grandparents. She had gone to the doctor that day and discovered she was pregnant. They were the only ones headed from the west to the east. That, too, seemed impossible. 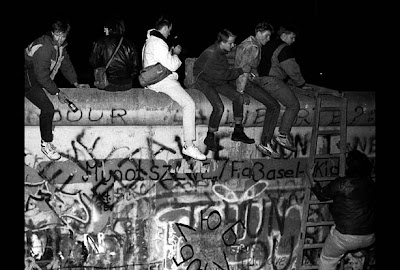 And apparently Mstislav Rostropovitch went to the wall and played Bach on his cello. Can you imagine this? I mean, I can imagine Bono organizing a concert for something like this. But to just show up spontaneously and play without benefit of bodyguards? It boggles the mind. The world has changed in 20 years.

I come home from my run/walk, sweaty and in need of a shower and some breakfast. My friend D made a bread a couple of weeks ago. No recipe (he never uses one) - just threw things together and knocked it out in an hour. He didn't love it. I did. It had currents and walnuts and poppy seeds. I have no idea what that round of citrus looking thing was in it, but it had a citrus-y thing on the bottom. Oh, and some kaffir lime leaves stuck to the bottom as well. I ate it as bread while it was still edible, and stuck it in the fridge when it began to harden. Then I found this recipe for bread pudding on the Weight Watchers site - a mere 4 points on their calculator. I adapted it to my current bread situation. I'll give you the recipe as it's written, but you can substitute any kind of bread, I'm sure. Raisin bread would work great, I suspect..... 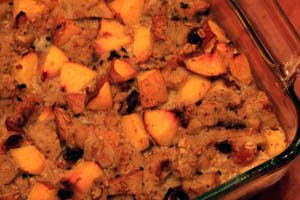 One day before serving, lightly spray a 1 qt. glass or Pyrex baking dish with cooking spray. In a medium bowl, combine bread, peaches, raisins and granola

Whisk together milk, sugar, egg and cinnamon. Stir into the bread mixture. Transfer to the prepared baking dish. Cover and refrigerate overnight.

Heat oven to 350F. Uncover bread pudding and bake 30 minutes or until bread is golden.

The original recipe called for this to be served with warm, reduced-calorie pancake syrup, but I find that totally unnecessary. With the peaches, raisins and sugar, I personally don't need any more sweet taste. Besides, I don't buy low-fat pancake syrup. Or low-fat cheese, for that matter. I will eat less cheese if I must, but I won't substitute the flavor of a full fatted cheese. Sacre Bleu!

I don't have low fat granola. It wouldn't occur to me to buy such a thing. Or 1% milk, for that matter. I used regular granola and low fat soy milk. I didn't need to add raisins, and I only used 1 TBS of sugar. Needless to say, I didn't measure the cinnamon!

For anyone wishing to lose weight, I'm still promoting the Weight Watchers approach. You can eat anything -- it's about portion control primarily. Fiber intake too. I don't worry about following their recipes exactly. (Have I ever worried about following ANY recipes?) Interestingly enough, I heard another story on the radio today which said that research has shown that for those who diet, if they restrict certain foods, those foods act as drugs when they are re-introduced into the diet later. So if you don't eat potatoes, for instance, you will find yourself addicted to them if you eat them later.

So I'll stick to Weight Watchers, have a glass of wine with a dinner of protein and veggies and a half a baked potato. And I'll devour some bread pudding for breakfast. To date, I've lost 8 pounds.
Posted by Toni at 7:35 PM

The top picture reminds me of my eraly morning walks along Ocean avenue in Santa Monica, nice memories.
Monday was an all day 20year celebration of the dall of the Berlin wall in Europe. A 1000 piece 8ft tall dominos row, decorated my artists and children, fell along the road where the wall stood .. quite a symbol, very moving. I saw it on tv.

I love walking in the morning, so peaceful and quiet...miss doing that now!

I usually run in the evening, and I get to smell dinner being prepared in every home as I get hungrier as I run. Finishing your run in the morning and coming home to this bread pudding must have been great!

Laura - I heard about the dominos. It sounded very moving indeed.

Hi Dhanggit - Thanks for stopping by my blog. I'm guessing that moving is probably taking up most of your time!

Lisa - Welcome! I don't have the energy to run in the evening after work, especially these days when it gets dark so early. Just finished a piece of this pudding...smiling.....

Beautiful post. I remember when the Berlin Wall went up. It was the talk of my high school. Evocative pictures and good advice about the way to eat.

Penny - I remember it too, though it seems like a distant dream these days.

I can recall the wall going up, too. They had us poor school kids so scared in those days.

Much better when it came down.