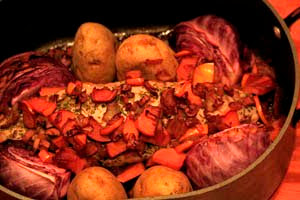 My friend D and I took a hike today. I mean, it was one serious hike. We started at the glider port in La Jolla, which overlooks the ocean. I cannot believe that I've lived here since 1986 and have never been to the glider port!

We hiked down the path from there to the ocean. It's fairly steep, but has steps. We came out on the south end of Black's Beach and headed north, walking all the way to the north end of Torrey Pines. Then we headed up the road and hiked along the top of the cliffs until we got to the north fork of Broken Hills trail. From there, we headed down to the beach again and then walked back to the trail by the glider port.

It's interesting how the cliffs are so different on the north end vs. the south end of the beach. On the north end you get vertical cliffs with no vegetation. On the south, the cliffs are more gentle with shrubs growing up the sides. All along the top, there are the Torrey Pines - far fewer than there used to be before the drought weakened them and then the beetles came in and finished the job. But still, there are some left on top, and they are quite beautiful.

The hike up was killer. It was the last of the 8 miles, and just as steep. The stairs didn't seem as friendly. I was self cannibalizing by the time we got to the top, and I was out of water. Fortunately, there's a little place up there which serves sandwiches. We got the last of the grilled salmon on rosemary sage bread and a fresh bottle of water. For $10, we could eat our sandwich and watch the parasailers as they leapt towards the cliff, looking like some strange puppet hanging from a giant, arched nylon wing.

When we got home I was aching, smiling and chilled. A pork roast seemed like the perfect way to warm up, and will provide much of my food for the week. I had purchased some persimmons about a week ago and they were finally ripe. Pork and fruit go so well together, I knew I had to combine the two. I had a 2# pork tenderloin ready to go. Besides, I was inspired by Terry's recent post over at Blue Kitchen. I needed some pork! Not the same dish, but pork nonetheless.

I decided to brine the pork first. Or at least, my version of brining it. I just combined 3 TBS of salt with 2 TBS of sugar, mixed them thoroughly and rubbed them all over the pork. I let it sit for about an hour and a half while I prepared the fruit. This is the method I use when I make gravlox, and it does a nice job of drawing the water out of the fish, so I figured it would do the same for the pork. It did.

While my pork was brining, I cut up an onion, about 4 good sized mushrooms and the persimmons. I used a spray of oil in the pan and added about a tsp. of butter and some minced garlic. I prefer both my onions and my mushrooms cooked well, so they took about 6 minutes or so on medium heat. After about 4 minutes, I added the persimmons which I had chopped coarsley, as well as some thyme.

I got out my large roasting pan, took out the rack and laid down sprigs of fresh rosemary across the bottom. I washed the salt off the pork and then placed one half of the tenderloin - flat side up - on the bed of rosemary. I spooned half the fruit mixture over it, then laid the other half - flat side down - on top, finishing the whole thing off with more of the fruit mixture. A splash of apple cider went over the top. I cut a red cabbage into quarters, and added a couple of potatoes cut in half and into a 350 oven it went for about an hour.

Brining has become one of my favorite things. The tenderloin came out juicy and moist, and the apple cider and rosemary played off each other, balancing sweet and aromatic. The persimmons were sweet but not at all cloying. To borrow a phrase used by Terry, this roast was good. Company good. And the cool part was that I got to soak my aching body in a hot tub while it was roasting....
Posted by Toni at 9:55 PM

Hiking is one of my fave sports activity with hubby!! On weekends we try to organize one, but now with our baby doing some hardcore hiking is no longer possible :-) maybe in few years time! Love the idea of persimmons in pork roast! delicious

Dhanggit - I suspect that with a baby you don't need the exercise provided by hard core hiking. You're probably getting plenty of exercise!!!

Excellent post, Toni. I love your description of the hike and the wonderful sandwich. Pork with persimmons is inspired!

Thanks, Mimi! The hike was spectacular, the salmon sandwich was grilled fresh, and the pork was exactly what I needed to end the day.

The hike, the salmon, and the pork all sound perfect. Look forward to your kitchen pictures tomorrow.

Penny - They WERE all perfect! And I've got the photos ready to go.

WOW - this looks good. I can't wait to try it - with my fresh herbs form your garden!

Great shots of the hike - I can't wait to return to southern California in March.

I made this roast the other night Toni and it was wonderful! thanks again for the rosemary and the recipe.

Have a great holiday!