New Kitchen for an Old Home 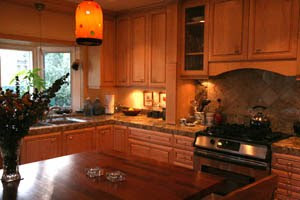 Back in 2003 I knew I had to do something about my house. The plumbing was on it's last legs in the bathroom, and I was brushing my teeth in the bathtub. I had thought about remodeling my house - it was 700 sq. feet - but it was only a thought until the plumbing became a real issue.

I live next to a house which could easily be on the cover of Architectural Digest. It has great "bones". It sits down in the canyon and from up here you can't really tell how large it is. It was designed by an architect who lived there when I moved into my house as a renter. He sold it several years later to a man who is also an architect, who gutted the inside and upgraded pretty much everything. By then I had bought my house. I was friendly with both owners, and so when I mentioned that I wanted to remodel my home, they both gave me drawings of possible remodels. I appreciated both gifts enormously, but neither one of them really spoke to me.

So I invited a couple of friends over to dinner, and after wining and dining them, I dragged out the plans I had been given. "What do you think of these?" My friend John said "You need to think of the outside walls of your house as your space, and then ask yourself what you want done with that space." "That's exactly the kind of thinking I was looking for, but didn't get in either of these drawings!" I answered. While John and I were talking about the space and how to think about it, his partner was sitting quietly studying my house. He finally said "You know, this is a lot like the house I built for my mom in Tijuana. Do you want to see what I did?" "Sure!" And I handed him a piece of paper and a pencil. He sketched out the plans for what would turn into my current home.

I moved in with a girlfriend at the end of April of that year, and at the end of September I moved back into my new old home. The house, which was built in 1940, now has a new roof, all new windows, new plumbing, new electrical and new floors. Most of the old plaster remains, including the lovely arches that were part of the interior and which give the house a Tuscan feeling. I have increased the footprint by about 200 sq. ft, bringing me up to a grand total of 900. I now have 2 bedrooms (the master is big enough to walk around the bed when making it - yeah!!) and two bathrooms, having moved the kitchen up to the front of the house off the living room. I am in heaven.

There are people who say that remodeling a home is fun. They claim that shopping for granite and sinks and faucets is terrific. I have heard that. I have actually heard that. But right now I cannot remember who these people were or what planet they came from. They obviously weren't single and working, trying to support themselves. But if I never have to remodel another home in my life, I'd be quite content, thank you very much. It's like trying to squeeze yet another life into an already packed one.

But I must admit that I absolutely love my home - and especially this kitchen. I stressed over the cost of that hand made glass light fixture over the island. But now each time I walk into the kitchen I see happiness hanging over that island, and it makes me smile.

This post is inspired by Penny over at Lake Lure Cottage Kitchen. She asked us to post a photo of our kitchens on Wednesday. It's 11pm on Tuesday nite. I think it's close enough for government work!
Posted by Toni at 10:25 PM

Email ThisBlogThis!Share to TwitterShare to FacebookShare to Pinterest
Labels: kitchen

Gorgeous beautiful gleam!
I am one of those crazies who love doing all those things ... just not with another job. Building or remodeling is a full time job. It's results like you got that make it worth while are is the fun.

Oh Tanna, if I didn't have to work, then yes. I could imagine that it might be fun. But I cannot imagine having a life where there was nothing else to do!

It was very interesting for me to read the post. Thank you for it. I like such themes and anything connected to them. I definitely want to read more soon.

Some times we just need to splurge a little, like buying those hand-made glass lights.

Your kitchen is wonderful.

Toni, I would be very happy with your beautiful kitchen! Thank you so much for participating in this. Word is spreading that we should post pictures of Thanksgiving chaos. Join in if you want. This was lots of fun, even though I was late in getting my post up. We had company.

It is rather interesting for me to read that blog. Thanx for it. I like such themes and everything that is connected to them. I definitely want to read a bit more soon.

What a beautiful kitchen! I agree that remodelling isn't fun but it's worth the effort when the end result makes you smile. :-) Thanks for sharing.

I love the photo of your kitchen, I can't imagine all that work, and getting it all done in just a few months. Good for you!

Penny - Thanks for doing this - I think we all enjoyed it. As for Thanksgiving, I'll be at my sister's house. If she's up for it, I'll post photos of her kitchen.

Rosabela - Yes, once the pain is over,there's years and years of pleasure.

Dave - Thanks for stopping by my blog. I hope you come back. I know I'll be visiting yours again and again.

A beautiful kitchen, Toni--I'm totally envious! A great story too. And I'm in complete agreement about the non-love of the process. I've now refinished wood floors five different times, three of those times as a renter. When people hear that and ask for expert advice on doing floors, I invariably say, "Hire someone."

Granite is a natural stone which is quite unique since, unlike man-made materials, these natural stones will show a variation in colour and texture to be used as kitchen worktops. With this in mind, the remodeling of your kitchen will gave it a beautiful look by the use of granite.

I love your kitchen! I wish that's my kitchen...

Congratulations, Toni, on your gorgeous new kitchen. I've often thought about gutting ours, but we don't plan on staying in this condo forever - not worth it now.