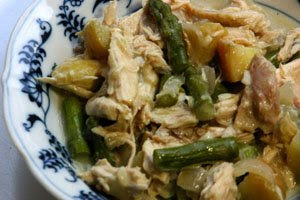 What was it that I made that used coconut milk? Did I post it here, or eat it before I had the chance to photograph it? My memory isn't what it used to be!

But there's this small jar in the fridge of coconut milk, so whatever it was, it didn't take the entire can. It's been sitting there staring me in the face every time I open the fridge. I knew I was going to do something with it before it went bad, but I didn't want to get locked into an idea and then go shopping for the ingredients. I wanted to let the dish evolve out of what I had in my refrigerator and my pantry. Most of my best meals happen that way.

I want to digress a bit here. There's a story which goes with this post, and I don't think I've told it before. When I was married and living in New Mexico, Bob did most of the cooking. I thought I was a pretty good cook when I met him, but I was a complete amateur. He had a pantry that could have supplied a batallion for at least 2 weeks. At first I found the whole thing overwhelming. Why did we need to keep all those weird ingredients in the pantry when we never used them? Lotus root? Odd pastes from Indonesia? Or Thailand? Why did we need 10 cans of green chili? How come our freezer was packed with everything under the sun?

Well, not only was he an amazing cook who taught me how to be creative in the kitchen, but he was also a magnet for all kinds of people from all over the world. I have no idea how we collected these people. They just showed up, like flies on the screen door before a summer rain. I remember one day a Chinese man showed up and he saw our kitchen with a selection of woks and 3 or 4 different soy sauces as well as shrimp paste and all the other necessities of a well stocked kitchen, and he offered to cook us a meal. We were delighted. "But do you have any ____?" (I've forgotten right now what it might have been.) "Sure!" "And what about lotus root?" "Oh yes, we have that." With each ingredient requested, his eyes got bigger and bigger when our answers kept coming back "Yes, we have that." So he set to work in the kitchen and produced a phenomenal meal for us.

And this type of scenario happened more than once, with people from various countries around the world and various states in the U.S. So whether or not it was a local from New Mexico wanting to prepare his favorite version of chili rellenos with home made flour tortillas and some beans and chicos, or someone from Indonesia wanting to make some Gado Gado for us, we always had the ingredients on hand. The only thing which might have necessitated a trip to the store would have been the fresh ingredients - we might have been out of mushrooms, say, because we had used the last of them. (I can't remember ever running out of onions or garlic, though.)

With a steady stream of interesting meals comes a steady stream of leftovers. Bob was a master of leftovers. I've met people who never ever eat leftovers, and I wonder if they are the same species as I am. I don't know how I would survive without them! On the days I see patients, I work until 7pm. I absolutely do not want to come home and start cooking at that time, so if I don't have anything in the fridge, I eat popcorn for dinner. Leftovers rule.

So now back to the coconut milk.... When I looked at that jar, I knew it was going to be a curry. It was either going to be that or that wonderful Thai soup made with coconut milk and galangal. But my favorite Asian grocery store is closed for remodeling, so I am left without a store close by to score some galangal. Curry it was.

When Bob made curries, he was quite creative about the process. He didn't feel constrained by tradition, and so his curries contained ingredients which people from Asia would probably look upon with some skepticism. But since they always tasted great, I adopted the Bob method of curry. The recipe I have here is my own, the amounts are an estimate and should never be considered written in stone. And by all means, if you've got something leftover in the fridge, unless it's a chocolate bar, try throwing it in - just for grins! Mine started with leftover coconut milk and a leftover, store-bought roast chicken....legs, thighs and some breast meat eaten for lunches. Bones reserved for stock...

In a saucepan, combine the chicken stock and the curry paste and simmer, stirring, until the paste is melted into the stock. Add brown sugar, stir until it dissolves and set aside.

Heat the canola oil in a pan, add onions and garlic. Saute until the onions are translucent - about 2-3 minutes. Add chicken and stir until chicken is coated with the oil and has absorbed enough of it to flavor.

Add the stock and the coconut milk and stir. Reduce heat and simmer until the sauce has reduced somewhat.
Add the asparagus. If your asparagus was previously steamed, you will want to add it at the end. If it's fresh, it will need an extra minute or two to cook lightly.

You can add some fresh basil if you've got it. It's always a lovely addition to Thai curries.
The sugar in the recipe offsets the spicy of the curry paste. It's the same principal as serving sopapillas with honey in a New Mexican restaurant - the honey will cut the spicy of the chili. You can drink water all day long and it won't put out the fire on your tongue if you've overdosed on chili. But something sweet will help douse the flames!

The Thai Curry Paste was a small jar I bought from Trader Joe's. I didn't photograph the jar because, quite frankly, I forgot to do so. And now my camera lens is having seizures and I must send it to be repaired. But you can find these kinds of pastes these days in many stores. The brand is not as important as the taste, and you'll have to experiment to decide which one you like best.

The apple was thrown in at the end because I had bought 3 apples, and none of them were great. The middles had begun to turn brown, so I used this last one in the curry, cutting out the brown parts.
Posted by Toni at 10:09 PM

Email ThisBlogThis!Share to TwitterShare to FacebookShare to Pinterest
Labels: curry

Never laid eyes on your Bob but I can tell you he is a real dream boat!! Power to the pantry and leftovers.

I know a few people who feel disgusted by the idea of eating leftovers, as if it weren't the food they'd relished earlier...But nobody is perfect! :)

Lotus root in the pantry? I don't have any in mine. Good God, I'm that close to the inferiority complex. :)

Tanna - He was a dream boat! It's a wonder I didn't gain 40 pounds living with him!

Anya - Never let a root give you an inferiority complex, I always say! They're used often in stir-fries and they're also used in Chinese medicine as a tonic for the lungs. Double your pleasure!

I can tell you this...he once made a salad that (was most likely exactly what my parents had been trying to feed me for years) that changed my life. I will never forget it. It was so simple, but he used fresh cracked peppercorns in the dressing and it astonished me. I was just in awe and ate every bite. I loved it, I loved him and I love you!

I never knew this - how wonderful! Yes, he could certainly make the taste buds sing!