My camera lens is off being repaired. This leaves me feeling completely out of sorts. I mean, I don't know what to do with myself! It also means that I cannot photograph anything that I've cooked recently. So while I was sipping my morning chai, I decided that maybe it was time to revisit this old post that I did back in March of 2007. I don't have a clue how I did such a good job of formatting the original post - this one's been fighting me for hours!! Hopefully, my lens will be back in time for next Sunday's post - I'm in no mood to spend my Sundays in battle.

When I was growing up, every time any of us felt sick, my mother always made us tea and toast. Lipton, of course. It was supposed to make me feel better, and I suppose the simplicity of it made sense, but the effect was always the opposite her goal. One lump or two made no difference - I would sip the tea and immediately feel nauseated. I guess it had a Pavlovian effect on me in later years, when the smell of tea would make my stomach queasy. I loved watching English actresses pouring tea into china cups and passing around lumps of sugar. It was all so civilized and lovely. I would have loved to have lived that civilized and lovely life, I thought, wearing those dresses, pouring that.....tea? Oh dear. I needed a substitute.I really cannot remember when it happened. Honestly, I don't recall if I was still living in New Mexico, or if I had moved to California, but at some point in the distant past, I was with some acupuncturist friends who offered me a cup of bancha tea. "Um....I'm not really a tea drinker...." And before I could explain my Pavlovian response, they insisted that this was not like black tea, and I should try it. "Well.....OK...." It was not in my nature to argue with my hosts, after all.
I said a silent prayer and took my first sip. This is tea? Really? For those of you unfamiliar with it, bancha is a traditional , daily use, Japanese green tea variety that is made from mature leaves, plucked in the summer or autumn. Bancha's like a mature samurai - the extra time it's had to mellow in the sun makes it a bit toastier in color, with a sweet, earthy taste. It has nothing in common with the black tea favored by Europeans. It's ability to strengthen the metabolism and aid in digestion, makes it a favorite among those following a macrobiotic diet. All I knew was that it was delicious. Bancha led to sencha and matcha - all from the same tea plant, but picked earlier in the year. These familiar green teas are slightly more arrogant - they have an edge to them, and an astringent quality. As long as they're not steeped too long, they are delicious. Leave the bag in the water for too long and you're probably not going to like the bitterness. Of course, it's easier to put up with the attitude when you know their antioxidant and anti-carcinogenic properties. 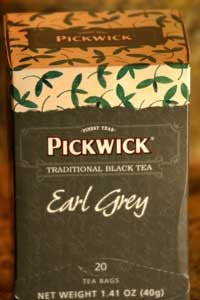 From there, I branched out into Earl Grey. The Earl was a huge step for me, as the basis here is black tea. But it is flavored with bergamot oil, which lends a distinct citrus flavor and aroma. With citrus as it's leading edge, I managed to sail past that black tea flavor without my stomach noticing it. I was making progress. The Earl and I are friends now, but we don't see each other too often.

Then I discovered Spiced Chai, or Spiced Chai Tea, as Trader Joe's calls it. Funny name, that. Since chai is another name for tea, it means that this tea's name is Spiced Tea Tea. Be that as it may, I used to take a teabag and pour boiling water over it, letting it steep for a while until it reached the right color. Then I'd add milk. 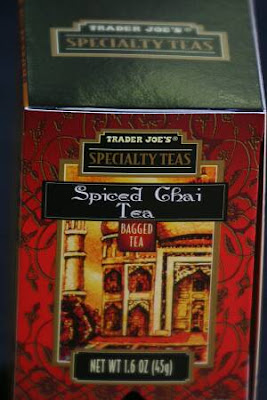 But back in 2000, a friend of mine who is a photojournalist went to India to photograph the first Kumba Mela of the new millenium. The Mela is an enormous Hindu festival, and that year it was held in Alahabad. There were about 75,000,000 people from all over the world who converged on Alahabad for the celebration, and my friend was swept up by the colors and sounds and smells of it all. He told me about drinking tea from a street vendor, who would have a pot of water with milk boiling over a fire. When someone ordered some tea, he'd throw a handful of tea and sugar into the pot, then ladel some into a small, low-fired ceramic cup. The cup was "disposable", meaning people would throw them away when they were done.

I was intrigued by the idea of boiling the milk in with the water, and wondered if it would make a difference. I don't eat much sugar, but I figured a teaspoon of it wouldn't make all that much difference. 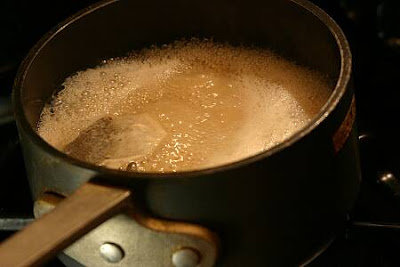 With my first sip, I became a convert. 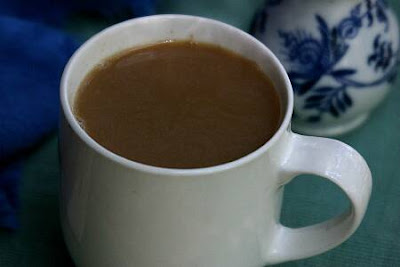 Ever since then, this has become my standard morning drink. Yes, I will still have a cup of coffee from time to time, but my morning chai has become my morning comfort. Different brands of chai will have different spices in them, but ginger and cardamom are fairly standard additions. In Chinese medicine, both of those spices are used to benefit the digestive system, and there is a whole school of thinking in Chinese medicine which says that all chronic diseases stem from a poor digestive system. As a student of mine once pointed out to me as I sipped my chai in an herbology class, declaring that my digestion was actually quite good, "Yes, but you self-medicate every day!"
She was right. I do. And intend to continue to do so, enjoying every sip!

I now have an entire pantry shelf devoted to teas. I don't know how that happened. Do they breed in there? And I've discovered something about me. I'm fickle. I'll fall in love, it will last for a while, and then I move on. So while bancha was my first love, my relationship with Earl Grey was more of an affair. Spiced chai is my steady partner in life. But I confess to having a few flings from time to time. There's genmai cha, a green tea with roasted brown rice in it. Genmai has a kind of popcorn flavor, which is appealing from time to time, but not as a steady romance. His first cousin houji cha, a handsome brew made from roasted bancha leaves. With a chestnut color and light, almost sweet taste, I flirt with him in the summer. (He's the most decafinated of the green teas.) And then there's a very special, decafinated rooibos (Afrikaans for "red bush") tea, which a local pastry maker calls Marco Polo Rouge. Marco is from the legume family, and he's oh so sweet and slightly nutty. Someday, I hope we travel together to his homeland. So far, he's been silent on the su 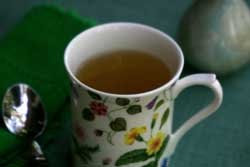 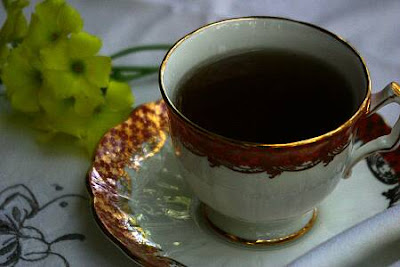 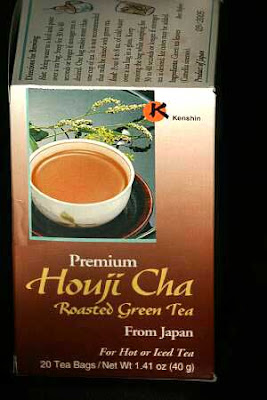 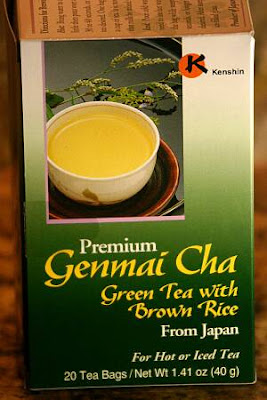 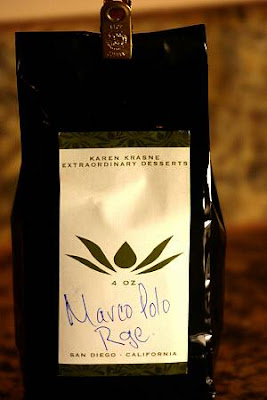 What an interesting (old) post, Toni. Maybe I didn't start reading your blog until after you posted that one. Or else chai was under my radar. I'm more of an Earl Grey fan, myself, but enjoy chai now and then. Also some herbals too (Peet's Lemon Rose and Ginger Gensing from an online tea company). Thanks for the fun read. Hope your camera gets fixed!

Hi Carolyn - Well, I'm glad you enjoyed the post. I used to love Earl Grey, but now there's nothing that beats a good cup of chai for me.

I was on Lydia's blog just now, and saw your post and I wanted to see your blog as well. I am an admirer of French and Russian literature, I too would have loved to have lived that enchanting life from Balzac's books and to wear those sublime dresses...
The way you describe your relationship with your tee is interesting too...
All together, lovely post, I will stay around to see your articles.

All sorts of teas have that effect on me with an empty stomach.especially green and blcak. I love teas however and have switched to more tea , rather than coffee drinking. And the Roiibos has to be my all time favorite. Didn't know it was part of the legume family.

In my russian family, tea is respected as a decent accomponiment to cookies. :) In truth, all 'exotic' sorts of tea, green and black, have become widely available in Russia only after the USSR collapse, or better yet in mid-nineties. Funny enough, I was contemplating on beverages in my latest post too. :)

Hi Monica - Welcome, and thanks for stopping by! Please do come back.

Courtney - I adore Roiibos teas too. But my all time fav is definitely a simple Assam tea prepared the way they make tea in India. If you try it, you'll be hooked - I swear!

After this I must try chai again.
I seem to always go back to the Earl especially now that I can find him green.
Great post.

Tanna - This is truly addictive. I swear.

In my house, tea was an after dinner ritual. We children were allowed to choose special cups and enjoyed the aesthetics (more than the tea, I guess). My first tea discovery was Lapsang Souchong, a smoked tea. Now I just add a pinch to a bland black tea base and enjoy it that way. For rooibos, try the Tick Tock brand, or Republic of Tea rooibos with vanilla. So many wonderful teas! Loved your adventures.

Susan - For after dinner, I'd stick to a rooibos because of it's lack of caffeine. But I remember Lapsang Souchong tea and I remember loving it. Thanks for the reminder!

mmmm.....chai...addictive! I love it when I visit India, grab every chance to have it. I love green tea after dinner and has been ritual for me n hubby lately.