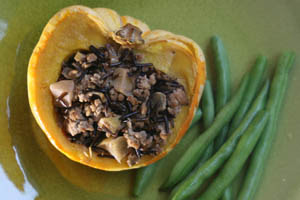 I remember when I was in my 20s and lived in Manhattan. My boyfriend at the time had a car, and we drove up to New England one beautiful fall day to drink in the autumn colors and stop at the local food stands on the sides of the roads. We found a farm that would sell milk to us, practically straight from the cow. We didn't bring any containers with us since we didn't know that such a treasure existed. The farmer was kind enough to rummage around and come up with a large glass jar with a tight fitting lid. He filled it for us and I think we might have paid a dollar for it.

We turned south and began heading back to New York when we saw a stand by the side of the road selling apples and squash. The colors demanded our attention, so we stopped and browsed among the heaps of acorns, butternuts pumpkins and gourds. I remember looking at the rich colors and textures and realizing that I had never cooked a squash before. Determined to remedy this hole in my education, I selected an acorn squash - firm and dark with flecks of orange. There was something so honest and appealing about this vegetable - a rugged, no-nonsense skin meant for someone who was comfortable using tools. This was not a painted fingernail kind of veggie - this was a hammer and saw kind of thing. Since I had never met a vegetable I didn't like, I was ready to roll up my sleeves and wrestle this thing into the oven.

Which is pretty much what it took. I had sharp knives, it's true, but still, this thing wasn't going to give up easily. I handed it over to the boyfriend, and thankfully he didn't hack off any fingers cutting that thing in half. There it lay, it's orange flesh and large seeds exposed. As I recall, all I did with it was to scoop out the seeds, put some olive oil on it, lay it on a cookie sheet cut side down and bake it for about an hour. I remember liking it, but not being convinced that it would be a mainstay of my diet.

Then I moved to New Mexico, and my husband was the master of the kitchen. He's the one who taught me most of what I know about cooking. One of the things he used to love to do was to cook potatoes and squash in the fireplace. He'd cut them in half, put some oil on them, wrap them in aluminum foil and use tongs to poke them deep into the fire we kept burning to heat the living room. So while he was busy making his fantastic concoctions in the kitchen, the house began to smell of roasting squash and potatoes. If there's anything that can stimulate an appetite more, I'd like to know about it!

These days I lack the fireplace, and the barbecue really isn't the same. So even though we're having an insanely warm fall, I have this necessity to cook squash. Here in San Diego, temperatures are hovering close to 70 degrees. In the past, I used to congratulate myself if I managed to make it to November without turning on the heat. These nights I'm sleeping with the windows open and only one blanket. I'm tempted to turn on the ceiling fan at night. But next week is Thanksgiving, and I cannot imagine being this close to our yearly food festival without some winter squash on my plate.

As a woman with a crazy-busy acupuncture practice, I like to cram in as much healthy food as I can, and if I can make it a one dish meal - all the better! Stuffing vegetables seems to be the ideal solution for this - the bigger the vegetable, the better. (This was not always the case in New Mexico, where we grew zucchinis. Anyone who has ever done this knows what I mean. It's about the ones that get away. You look under those elephant ear-sized leaves one day and pick every zucchini you can find. The next day you go back, lift up a leaf, and there's a zucchini the size of a small sedan lying there!) But I digress....

For this stuffed squash I chose a carnival squash, probably as much for the name as well as for the size. Perhaps it's years of practice. Perhaps it's sharper knives or the different variety. I don't know, but I didn't find it that difficult to cut it in half. I scooped out the seeds, coated the squash lightly in oil and filled it with what I had available. In this case it was:

about 1/2 cup of rice - a combination of wild and brown
about 1/2 cup of ground turkey
1 apple, cored and cubed
1/4 portobello mushroom, cubed
1 cauliflower floret, cut up
dash of cinnamon, nutmeg, fennel, salt and pepperAmazing that I didn't use any onion or garlic. I used to think that if you wanted to cook anything with the exception of oatmeal, you started with onion and garlic. I'm not completely over my addiction to those two, but I've learned that with the right combo of other spices, it's possible to survive. Instead, I sauteed all of the above except for the apple and then added the apple just before stuffing. I popped the whole thing into a 350 degree oven for about 50 minutes, pulled out an old Cesaria Evora CD, and finished reading "Eat, Pray, Love." Between the book, the music and the food, I was livin' large..... 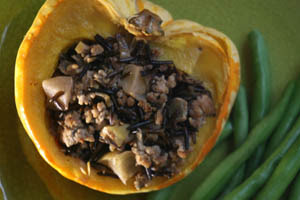 For more health news, visit Mission Valley Acupuncture
For a place to share which natural remedies work for you and which don't, visit my other blog: Second Opinion
Posted by Toni at 9:51 PM 16 comments:

Bean Soup for a drizzly day 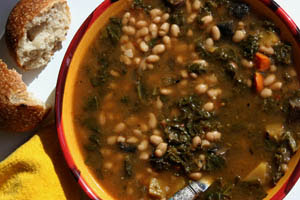 A couple of weeks ago, it was Santa Anas and fires. Now we have gray skies and even a lite drizzle. But don't count on it. This is southern California, after all. So just when you think fall has finally arrived, the next Santa Ana can blow through town. Hopefully without the added horror of smoke and ash - but still, it can make selecting your clothing for the day a bit of a challenge. Not to mention selecting what to cook for dinner. A salad with some grilled shrimp? A hearty stew? Winter squash or summer squash?

For some reason, I've been drawn to kale recently. There's something magnetic about its dark green leafiness that draws my eye every time I'm around produce. I decided that my body must be craving calcium, beta-carotene, antioxidants or the potent anti-inflammatory properties kale offers. It didn't matter to me, though - I just wanted to make something which included it's dark green loveliness.

But somehow kale seems to lack the conviviality of spinach, say. You can serve spinach with just about anything, and somehow it seems to get along. Kale, on the other hand, is the kind of guest you invite to a particular kind of dinner party. It's not something you'd expect to find on top of your pizza, for instance. Nor would you seat it next to an elegant presentation of a crown roast of lamb - or anything else with a crown, for that matter. No. Kale is more of a meet-you-in-the-library kind of vegetable, rather than either a formal attire or pizza and beer kind of guest.

So my challenge was to find a way to incorporate kale into a meal that satisfied that need for comfort on a gray and drizzly day. My recent forays to New Mexico always make me think in terms of beans and rice. Beans.......Yes, that seemed like a better partnership than rice. And definitely a soup.

Open the fridge and forage. A half a butternut squash. (What did I do with the other half? Cannot remember! Obviously not baked as usual. Hmmmmmm....) Some carrots. Good. Onion, of course. And a red potato. Excellent!

Pour some oil into a pan and add about 3 cloves of chopped garlic and 1 onion, quartered then sliced. Sautee until the onion is golden. Add slices of potato and and winter squash (peeled, of course), and continue to sautee for about another 15 minutes. Add about 3 cups of liquid. I used chicken broth, but you could just as easily use vegetable broth. I also put in a bay leaf and several sprigs of fresh thyme. Bring to a boil, then reduce to a simmer and cook for about 15 minutes.

Now, here's the thing. I used canned northern beans for this soup. If you are making it with fresh beans, you'll have to start them well before you begin this recipe. But if you decide on the "down and dirty" approach as I did, you can toss a can or 2 of beans in at this point. This would also be the time to add your carrots and kale, and if you had any mushrooms you could add them to the mix as well. If you want to keep this as a vegetarian dish, stop there. If not, you could add some smoked kielbasa at this point. If you're a "mixed couple" (one vegetarian and one not), this dish would work well, as the kielbasa can be added to just one bowl and not the other. I love meals like that, where everyone's needs can be satisfied without making the chef crazy! 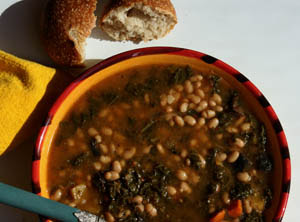 I'm submitting this to Weekend Herb Blogging, hosted by Beth from The Expatriate's Kitchen