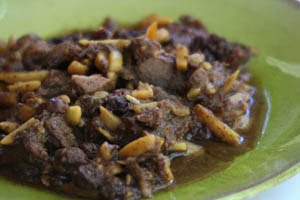 Why on earth would anyone decide to have a dinner party when it's bloody hot and humid? I don't have air conditioning, after all, so the party had to be outdoors. But that meant cooking. Yes, that thing I love to do but which involves heat. I had the distinct feeling that I was suffering from heat stroke when I invited a few new friends. The woman is a borderline vegan. She cannot deal with dairy and doesn't eat meat or drink alcohol. The two men on the guest list had no such restrictions, so my challenge was to come up with something which would satisfy everyone and leave me awake and alert when they arrived. I didn't want to be seen disappearing into a puddle on the floor, wailing "I'm melting........I'm melllllting!!!"

So why put myself through this? 3 good reasons: First of all, I had a good reason to call someone to clean my house. When you live in 900 square feet, you don't often call someone in to clean. It's embarrassing to admit that you can't manage to keep a small space clean. I usually DO manage to keep it at least somewhat presentable, but I wanted it CLEAN, and oh, do I love love love the results! Even my refrigerator shelves are sparkling!

Secondly, I had a great reason to clean off my table outside, as well as sweep up the path and the little deck. I think I added about 4 inches to the compost. Watering and clipping made the garden look especially fresh and inviting.

And last, but certainly not least, I got to make food that I hadn't made before. When you live by yourself, having company over is cause for experimentation. So I made 3 dishes which I hadn't made before, plus an alternate version of one I have made. I plan on dribbling these recipes out to you, dear readers, rather than lay them all at your feet at once. The one thing that I made which I have no photograph of is the focaccia. Too bad, as it was quite stunning. (Yes, I'm mad enough to have even baked for this occasion!) Half of it had feta cheese and half had none. I got the recipe from Peter Reinhard's "Bread Baker's Apprentice", p.164. This was one thing I hadn't made before, but I will let you search out that recipe for yourself. I love this book and so far haven't had a single failure when I've followed the recipes.

The first thing that came to my mind when I pondered what to make for this gathering was Moroccan food. There would be meat for the meat eaters, and grains and veggies for the vegan. Perfect. I turned to several sources, but settled on the Moroccan Lamb Tagine from Epicurious. It had what I wanted - nuts and fruit. I, however, didn't follow the recipe. Surprised? I thought not. I'll give it to you here the way it's printed, but please go to the kitchen notes. It not only tells you how I tweaked it, but what else I would do when making this dish in the future.

Stir in raisins, almonds, honey, and ground cinnamon and simmer, covered, until meat is very tender, about 30 minutes more.

Cooks' note: •Tagine can be made 1 day ahead and cooled, uncovered, then chilled, covered.

1. Paula Wolfert, author of Couscous and Other Good Foods from Morocco, says she bought some ras el hanout in Fez years ago and had it analyzed in New York. That sample contained 26 ingredients, including ash berries, belladonna leaves, cantharides, galingale, and monk's pepper (cantharides, another name for the beetle known as Spanish fly, and monk's pepper being only two of the supposed aphrodisiacs that occasionally find their way into ras el hanout. It can also contain hashish). Ras el Hanout can be purchased through specialty stores, though it can also be made (legally) at home from the following ingredients:

2. I had a large bag of slivered almonds in my freezer. Need I say more?
3. The recipe calls for 1/2 C honey and 1 1/4C whole blanched almonds. Too much of both. The next time I make this, I'll add 1/4C honey as I found it a bit too sweet for my taste. While I love almonds, I thought there were too many of them in this dish. Having said that, I must say that I seemed to be the only one that felt that way, so I would recommend that you start with less of both and see how you feel about increasing either one or both of those ingredients.

Eating and Drinking in the Northwest. 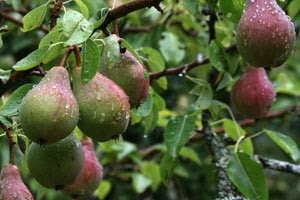 I spent the last 10 days in the northwest. Seattle to start with, and then out to Orcas Island. The alleged purpose of this trip was to do a meditation retreat, but it turned into a celebration of foodie paradise. Seriously. No, I mean seriously.

I went with a friend who had been going to Camp Indralaya for years and years. We stayed in a cabin and participated in the beginning of the retreat, but after a while it became obvious to us that our real need was for exploration of the island and the incredible food available. So for 5 days we walked and explored the lush gardens and orchards of Indralaya as well as the surrounding area. 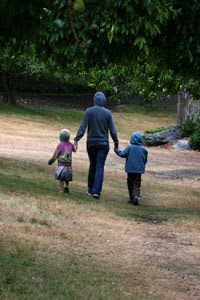 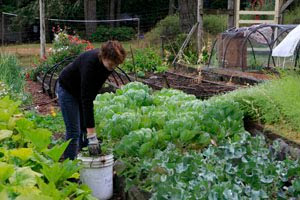 What I didn't get a shot of was the deer. They were everywhere. Totally unafraid of us. You could practically feed them out of your hand. In fact, I'm sure with a little patience it could have been done. There were also bunny rabbits which hopped up to you if you walked out of the kitchen. They were jonesing for some leftovers, and they made no bones about it.

At the end of this idyllic stay, we drove back to Seattle and I had another day to explore. So where did I go? To Pike St. Market, of course! It's the best free show on earth - from the flying fish.... 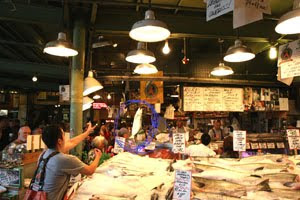 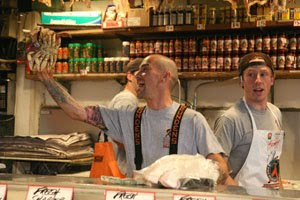 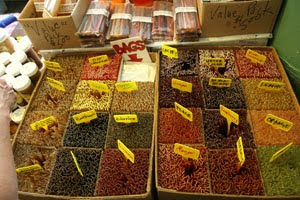 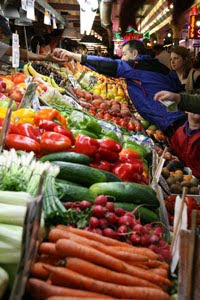 to the fresh flowers and the street performers....... 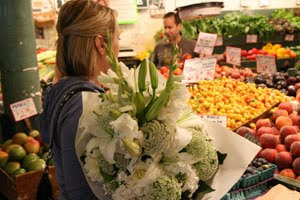 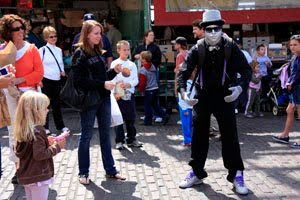 So much to see and do......So much to eat! But no cooking this past week. None at all. On the one hand, that suited me just fine. On the other, with so many fresh ingredients, it was foodie hell not to be able to cook! But I'm back now. I went to the farmer's market here today and realized how limited it is. Better than nothing, of course, but so very, very limited compared to the northwest.

But at least I don't have mold growing on me, and that's a delight!
Posted by Toni at 8:59 PM 6 comments:

Still on a Corn Binge 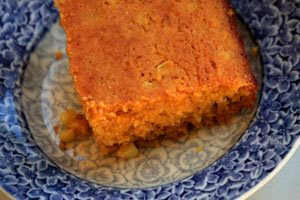 I'm getting ready to go on a much needed retreat up to Orcas Island - part of the San Juan Islands north of Seattle. A friend of mine has been telling me about a place he goes to for years - it's called Indralaya. We'll be doing some meditation, maybe some yoga, hiking, canoeing, and generally being out of touch with the rest of the world. The line "The world is too much with us" keeps resonating in my head, and this coming week will be a chance to change all of that.

It's funny. When I read what I've just written, I can't help but laugh. I absolutely love what I do and the people I work with. I've traveled enough in this world to know how lucky I am. But that doesn't mean that even the luckiest among us don't need time off. We need to recharge. Does everyone need this? I don't know. Maybe there are people out there who are content doing whatever they do in their day to day lives and don't need a change of pace. Apparently, I'm not one of them.

What do you do to recharge and renew? I'd love to hear about it!

So naturally, when I'm about to go on a trip, one of the things that I must do - aside from making sure that the cat has staff in place - is clean out the fridge. And since corn has been so abundant and delicious lately, I decided to continue my corn addiction with a spiced up version of a simple cornbread. This is one of those recipes that I took from the Joy of Cooking and then tweaked. Joy of Cooking usually delivers simple, no-fail recipes. Tweaking them "kicks them up a notch."

Sift all ingredients into a bowl.

Stir the liquid ingredients into the dry in a few swift strokes. You may add

I used chipotle chili, but you can use any kind you'd like. They all have a different flavor, and they're all good! 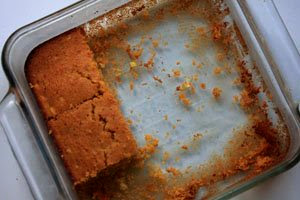