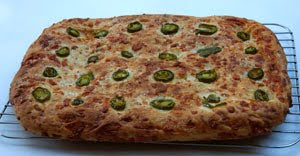 I love everything about the kitchen - except for cleaning it, of course. But I love the way my kitchen looks. I love the smells that emerge from it when I'm cooking. I love the feeling I get when I walk into it to prepare food - the beginning of an adventure! I love sharing the food I make with others, and I love the food other people share with me. The sharing of our food is the most basic of all activities. It's what makes us companions - those who literally break bread together.

I think of myself as more of a cook than a baker, except when it comes to bread. I'm crazy about bread! But when it comes to baking, I feel fairly restricted. In other words, I tend to follow the recipe. With cooking, I'll throw in whatever strikes my fancy, but with baking, I don't trust myself.

I have a neighbor who has taken it upon himself to learn to bake bread. He's not someone I would have thought of as a baker - he's a real estate entrepreneur. He can grill meat and veggies, but that's usually about it. However, recently he's decided that it's time to learn a thing or two about baking. Not knowing anything about the science of baking, he felt no restrictions whatsoever, and so he just dove in.

One day he came up to my house and we decided to bake focaccia together. He had made a number of them which he had shared with me, and while they tasted great, they all came out rather flat. I suspected that he wasn't letting the dough rise enough. I asked him to bake the bread, and I'd be his assistant. "Do you have yeast?" I gave him a packet. He heated a cup of water, poured it into a large bowl and added the yeast and a tablespoon of sugar. We sat down to enjoy a cup of tea together.

He put flour into it, but didn't fill it. He dumped it into the yeast mixture and began mixing it with his hands. It was too sticky, so he added more flour. And a little more. "I'll need a place to knead this." I cleaned off the island. "Put a bunch of flour on there." As he began to knead, I kept sprinkling more flour on the island so it wouldn't stick. When it finally got to the right consistency, we cleaned the bowl, sprayed it with oil, put the dough in, then sprayed the top of it and covered it with a towel. "I like to let it rise in the microwave." But my micro wasn't big enough, so I put some hot water in a pan, turned on the oven light, and we put it in there.

He left to do a few errands saying "I'll be back in about 50 minutes or so." About an hour later, I pulled the dough out. It had risen to a light, fluffy cloud. I took it out and flattened it down, adding cheese to the top and folding it over like an envelope. I kept doing this until I had what must have been at least a cup and a half of cheese in there -- maybe even a cup and three quarters. All I know is that by the time I had incorporated all the cheese, it kept popping out the sides. I repeated the spray and cover process and put it back into the oven, with some more hot water.

He came back and asked about it. When I told him what I had done, he said he'd be back in a half an hour. About 40 minutes later I took it out, spread it onto a cookie sheet covered with parchment paper and dimpled it. As I was pouring the oil over the top, he came in with a jar of jalapenos. I didn't have any parmesan to sprinkle over the top, so we had to make do with what we had - some sea salt. I turned the oven on and let the dough rise as the oven was heating up.

This must have been more time than he was used to letting the dough rise, because it came out beautifully - puffy and cheesy, with the bite of jalapeno on top. 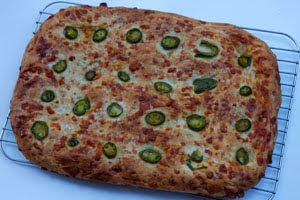 About 5 days later I got a phone call at work.

"Because I just made this pizza from that focaccia bread recipe. Remember how we talked about it being right to use as pizza dough? Well, it turned out great. I feel I should share it with you."

"Come on over right away - I don't want it to get too cold."

I'm sorry, but I couldn't photograph it first. I had to eat some. He had topped it with artichoke hearts, olives, peppers, and I don't remember what else - if anything. I was too busy devouring it. At least I got this shot before we polished it off. 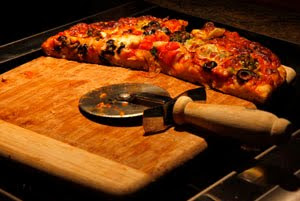