Trouble came and went...and then we ate

My transmission died on the way to New Mexico earlier this month. I was heading east on the freeway, about an hour from Tucson, when I noticed white smoke coming out of the back of my car. I don't understand white smoke. I just knew that when I pressed on the gas, the engine revved up but I didn't go any faster. I checked the temperature gauge and it was normal. I drifted over to the side of the road and manage to coast part way up an exit ramp and stopped on the side. There was a car stopped in front of me.
I pulled my cell phone out and searched for my AAA card. The man in the car ahead of me got out, walked back to my car and told me to pop my hood. I did, but didn't pay much attention to him. I was busy trying to find the phone number for AAA outside of California. Turns out that this man was truly an angel sent to help me. It took over 45 minutes for the AAA man to figure out where I was, even though I was on an exit ramp on a major freeway. The man from the car waited patiently while I tried over and over again to explain to AAA which exit I was on and where it was. The man from the car checked my oil level and fiddled with who knows what before heading back to his car. I noticed him moving stuff around in his car, making room in the back seat. That's when it dawned on me that he was making room for my luggage.
"Where are you going?" he asked me, when I finally got off the phone.
"Tucson".
"So am I. I'll drive you to where you need to go."

When the tow truck showed up, they asked me where I wanted my car towed. How should I know? I told them I wasn't familiar with the area and didn't have a clue. They suggested a Pep Boys in Casa Grande - the closest town. At 6:30 on a Saturday night, I didn't have a choice. I transferred my luggage to the man's car, got in and he followed the tow truck to Casa Grande. After the men pushed it into one of the bays, the man from the car told them "You treat this woman right. Be good to her." They told me they'd diagnose my car the next day.
I got back into the man's car and off we went to Tucson. The logical side of my brain told me that I might have been nuts getting into a car with a stranger, but my heart told me that this man was good and wouldn't harm me. My heart was right. He drove me to my friend's house in Tucson where I always spend the night on my drives to New Mexico. We fed him some dinner, and when he went to leave, he took my hand and said "It was nice meeting you, even under these circumstances. The only thing I ask is that you pass it on to someone else who is in need someday."
Transmissions do not get repaired on Sundays, so I wound up renting a car and driving to New Mexico. That meant that I had to leave for Tucson on Friday morning in order to drop the rental car off and get to Casa Grande before they closed for the weekend. I followed my friend back to her house, spent the night, and drove back to San Diego the next day.
Now, the transmission saga meant that I didn't make it to New Mexico in time to join a couple of friends of mine who drove out a day ahead of me. We were all going to stay at my house and I was going to show them around. They only had a slightly long weekend, while I was supposed to be staying a week. When I got back to San Diego, they were at my house, waiting for me. I drove up and they came out to help with my luggage. All of my stuff was moved inside by the three of us in one trip. This might sound normal to many of you, but for me, it was heaven sent. I didn't have to do everything myself - what joy! And when I got inside, they had a glass of wine poured for me, and dinner was ready.

We started with a chilled melon soup: My friend Darren sauteed an onion and some shallots until they were past translucent, added some sugar, thyme, and a healthy dose of fresh ginger. Then he added the "meat" of a whole honeydew, some thinly sliced white potato and some chicken stock. After it came to a boil, he simmered it for about 5 minutes and stuck it in the fridge to chill. The food processor churned it into soup, and after straining, he added some sour cream. 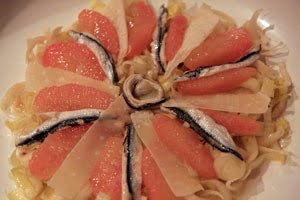 Endive, sliced thinly, white anchovies, ruby grapefruit and shaved Parmesan. He didn't use the tips or the bottom of the endive - just the center part...and then dressed the whole thing with white balsamic, olive oil, dijon mustard, salt and pepper. After tossing and draining it (reserving the liquid), he arranged the slices of grapefruit over the top, squeezed the membrane of the grapefruit into the dressing and drizzled it over the top.

It was, in fact, over the top. 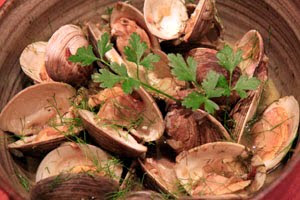 After sauteeing shallot, garlic, sweet onion and fennel in olive oil and salt, Darren added the clams and covered the pot. He cranked it up to high to get them going. When they started hissing, he threw in a glug of cognac and finished it with some fennel leaf.

If trouble had to come my way, it came in the kindest, most gentle way I can imagine. I'm so grateful for the help I got on this past trip. There was stress involved - yes. But I was taken care of too, at every step of the way. How lucky is that?
Posted by Toni at 10:37 PM 3 comments:

Fourth of July with Flag Cake 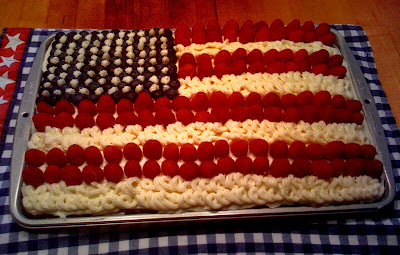 So this is what my sister does when she isn't celebrating major birthdays. Is there any wonder that everyone loves her?

I hope you all had a spectacular Fourth! I celebrated at a neighbor's house, where there was wine and food and even some live music! Everything paused at around 9pm, because from my neighbor's deck we could see the fireworks display over the bay. It's coordinated with music which one of the local radio stations plays. And when it was over, the trio that my neighbor hired began playing again - some original songs as well as some oldies. And the best part was that I could walk home, without having to fight traffic.