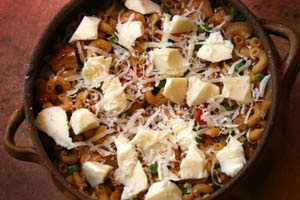 The news is a constant source of sorrow. There's seldom a bright spot - it's all about job losses and housing prices falling, and people unable to afford health care, and criminal politicians. And all of that against a backdrop of global warming and unending wars.

So it seemed like a good time to re-read MFK Fisher's "How To Cook A Wolf". First published in 1942 against a backdrop of wartime food shortages, the book was written as a meditation on how to live with grace under the cruelest circumstances. With the wolf sniffing at the door, the most practical response is to learn how to cook the wolf. She speaks of the men and women who cooked and marketed their way though the war who "will feel, until their final days on earth, a kind of culinary caution: butter, no matter how unlimited, is a precious substance not lightly to be wasted; meats, too, and eggs, and all the far-brought spices of the world, take on a new significance having once been so rare. And that is good, for there can be no more shameful carelessness than with the food we eat for life itself. When we exist without thought or thanksgiving we are not men, but beasts."

I consider myself among the lucky... I have a job. Well, I'm self employed, so of course I have a job, and even though business is slower than it's been, I still have work. I've seen the wolf in the canyon below my house. My neighbors have reported it in their back yards. But so far, he has not come to my door.

How to Catch the Wolf

A creative economy is the fuel of magnificence.
Aristocracy, Ralph Waldo Emerson

While I'm not always sure about the magnificence, I know that everyone around me seems to be more interested in the notion that food comes from the earth. Small pots of herbs seem to be springing up in everyone's kitchens or tiny side yards. More people are joining community gardens. When I put my lunch in the fridge at work yesterday, I noticed one of those black plastic, one gallon pots from a nursery, sitting next to the sink with tiny yellow and red grape tomatoes in it. Someone's overflow.

Leftovers have become popular again. I've known people who, for many years, wouldn't consider saving leftovers. At the end of each dinner, they'd toss whatever was left over into the garbage. I always stood there in mute horror as I watched perfectly good food being thrown away. Now these same people, while not always creative with their leftovers, are dumping them back into a container and stashing them in the fridge for tomorrow's lunch.

When I lived in New Mexico, I learned about leftovers. Bob would always cook huge meals, even though there was usually just the two of us. But that gave us plenty of leftovers - some eaten "straight up" (just the way they were cooked originally), and some turned into another kind of a dish - a soup, a stew, a curry. One of Bob's go-to solutions for leftovers was pasta or rice. By sauteing an onion and some garlic, he primed us for a meal. If anyone walked in at that point, there was the inevitable "Boy, that smells good! What are you making?" 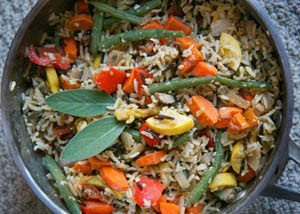 These are two variations of my standard leftover fare. There's a rice version with some leftover veggies, and a pasta version (about to be popped into the oven) with some chopped up chicken breast (left over from a barbecue) and the remains of some mozzarella cubed over the top. Both could be considered as being made by someone "living on a war budget", but the addition of herbs (fresh from my garden), and/or chili and some rich cheese, yields - perhaps not magnificence - but surprisingly satisfying meals.
Posted by Toni at 10:04 PM 9 comments:

A cool summer brings out the baker in me 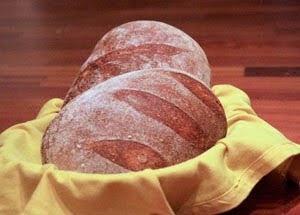 While the northeast is sweltering under oppressive heat, we in San Diego find ourselves wondering when summer will begin. We've had May Gray, June Gloom, and July forgot that it wasn't June. Now it's August and the sun is starting to poke out in the afternoon. My tomatoes are still green. The basil is in it's infancy still. I don't have enough sun in my yard to plant corn, nor would the infestation of gophers for the last 2 years make that a wise choice.

So when all else fails, I bake.

I had two friends staying with me recently who, when they saw these loaves come out of the oven, declared them to be "Jesus loaves". Gotta love that -- the Jew bakes Jesus loaves! But they do smell divine as they're cooling on the rack. And they're sourdough, so they're perfect for all manner of things - cheese, French toast, or just dipping in some lovely olive oil.

I got the recipe from Peter Reinhart's book "The Bread Baker's Apprentice". The recipe goes on for 3 or 4 pages - and that's after you've gotten your starter (barm) going. So there's no way I'm going to post that here....I'd be up for the rest of the night. But I DID bake a sourdough bread and posted the recipe a couple of years ago. You can read about that here. The picture I took of that one was stunning......I must find that book again!

Mission Valley Acupuncture is now on facebook! I hope some of you stop by and have a look. My posts are about health, but of course, that includes food!
Posted by Toni at 12:17 AM 7 comments: