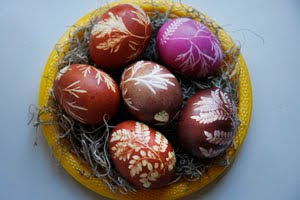 I live in the best neighborhood. Really - I do! I've never lived anywhere else where I've had such an interesting, diverse and friendly group of people surrounding me. At least, none that I knew. I lived in Manhattan for many years, but when you live in Manhattan, you don't know your neighbors. You might recognize them in the elevator, but you don't invite them over for dinner. Or for coloring Easter eggs.
One of our neighbors has a house here and another one in Colorado. She goes back and forth between the two places, and right now she's here. But she'll be leaving in about a week, so her neighbor invited a group of us over for a drink and to say so long to Patty, our "migratory bird", as she is now being called. As far as we all knew, it was going to be an evening of wine and nibblies. That's it.
But when we arrived, we discovered that our hostess had a more interesting evening planned for us. She's originally from Switzerland, and came to San Diego via Alexandria, Egypt, where she lived for many years. Like all people who tear up roots and relocate elsewhere in the world, she brought certain traditions with her, and one of them was her way of coloring Easter eggs.
We sat around the table in her kitchen, and before us was a bowl of water, in which were all sorts of leaves from around her yard. There were at least 3 dozen fresh eggs for us to use, and a pile of cut up old stockings. Stockings! Remember those? Seems there's a reason not to throw them away - they're useful for all sorts of things, including coloring Easter eggs. 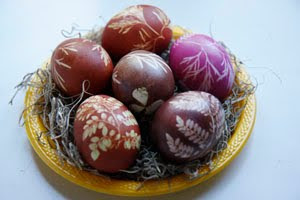 The method is simple. You take a wet leaf and lay it on an egg. Keep any stiff stems on the side away from the egg, and let the wet leaves touch the egg. Use your fingers to spread the leaves out, making sure that the individual elements are separate. When you are satisfied, pick up a piece of stocking, which has been cut in a square, stretch it out and lay it over your egg, pulling the ends together. You will now have an egg, tightly wrapped in a piece of stocking. You may release a corner of the stocking if you wish to re-adjust a leaf, which might have slipped out of place in this process.
When you are satisfied, pull that corner of the stocking back, twist the stocking ends, wrap a thread around the twist and knot it to secure the stocking. The tighter the stocking is wrapped, the less likely it is that the die will get under the leaf. Cut off any extra stocking and thread ends, so that you will have only a very short piece of stocking left and just the tiniest snippet of thread. You will now have an egg, with a leaf (or leaves) stuck to it's side, wrapped tightly in a piece of stocking which has been twisted tightly and secured with thread.
When you've done as many of these as you'd care to do, it's time to die them. The three eggs on the left of the photos up above - the ones that are a kind of reddish brownish color, are died with onion skins. "They hate me in Henry's", our hostess told us. "I just gathered the skins and didn't buy the onions." The other two colors are from natural dies that she brought back from Switzerland. The bright pink color is from something called Cochinille (I have no idea of the spelling) - which is a bug! The dark brown is from a kind of wood. I'm sure you can experiment with local plants.
Eggs were died for at least 30 minutes, and possibly more. After the second glass of wine, no one was counting. We each left with our "nests", and stronger ties to each other as neighbors.
And then I brought them home......... 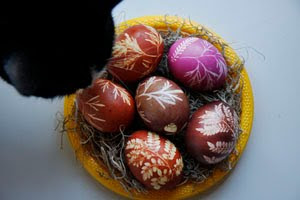 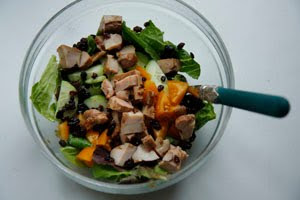 Remember those currants from the last post? I fell in love with them. Addicted, you might say. Which is funny, because I have no reason to feel addicted to currants.....I mean, why not just plain raisins? But when you add cinnamon and sugar and let them soak? Well, it definitely kicks those puppies up a notch.
So what if salad seems to be all I'm eating these days? (It's not, but it seems to be the only thing I bother to photograph and write about.) We're still having some gloomy weather here, but I'm in one of those "I must have greens!" moods, so salad works for me.......endless variety of ingredients, wonderful contrasts of flavors, all brightened by a zippy vinagrette. Besides, when you're eating by yourself, you don't even have to take it out of the bowl. How's that for easy clean-up?
So this time I marinated some chicken and cooked it on the grill. Someone had given me her home-made guava syrup, to which I added a little soy and some red chili to make a quick marinade. If you don't happen to have a friend who hands you this lovely gift, you can find it at Amazon. Click here for the link.
The rest was easy - assorted baby greens, a small, heirloom tomato, currants, cukes - whatever you've got. The currants worked well with the zesty chicken on the one hand, and a cool cucumber on the other. My dressing was the same as the last post.
Enjoy!
Posted by Toni at 8:47 PM 3 comments: 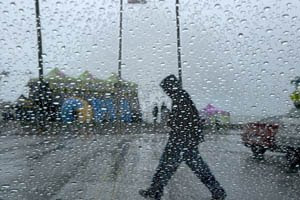 We finally dried out. It was beginning to feel like Portland around here, with rain, rain, and more rain. Don't get me wrong - my garden was loving it, and I was loving not having to do the work of watering. But it was beginning to wear on me, especially since southern Californians do not know how to drive in bad weather. It was scary out there, trying to get to work every day when people are roaring down the freeway, texting or whatever they're doing other than paying attention, and the roads are wet.
So when the sun came back this past week, it felt good, even if the temperatures stayed cool until 3 days ago. Cool was fine with me, and it helped everyone's spirits. 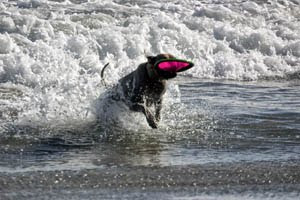 I was able to get outside and yank out a ton of weeds from my garden, as well as get in some walks. The sunsets have been pretty spectacular with the clouds we had.... 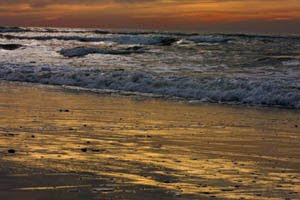 And everyone migrates to the beach to watch the show..... 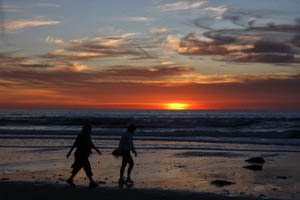 With the cool temperatures, winter squash is still an attractive option, but with the sun out and the temperature inching upward, so is a salad. So I was delighted to find a recipe in Food and Wine which combined the two. Needless to say, I tinkered.......
Ginger Roasted Winter Squash 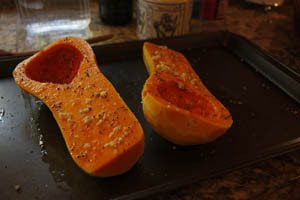 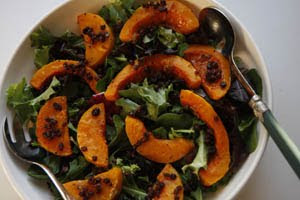 I brought this to a dinner at the neighbors. They were still talking about it the next week!
Posted by Toni at 8:39 PM No comments: