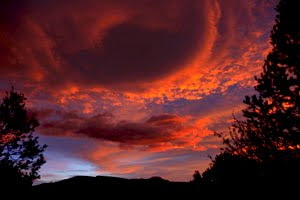 A trip to New Mexico the week before Christmas obliterated all thoughts of blog posting, of work, of being productive in any way. I arrived as I have so many times before - tired, hungry, and in need of some serious rest. I had only two things on my agenda: the annual solstice party I've attended for over 25 years with my close friends, and a Christmas eve party with a group of people I've known for almost as long. The rest was unimportant.

The weather cooperated. It was cloudy for much of the time -- unusual for New Mexico at any time of the year. The winds were ferocious. One day, we had snow flurries, which prompted me to build a fire in the kiva fireplace in the living room. I sat in front of it all day and read "A Tree Grows In Brooklyn" by Betty Smith. I've known about that book all my life, and if they made a film of it, I probably saw it. But this was the first time I read it, and what a rich and rewarding read it is. It's the kind of writing we don't see much of anymore - subtle and nuanced, rich in it's descriptions, and a story where not much "happens". No shootings, no drug busts, no gangs, no jet setting around the world - just life as it was lived in the early part of the 20th century in Brooklyn.

So I end 2010 with a wish for all of us: That 2011 brings us all the food we'd care to have on our tables, and enough left over to donate to those less fortunate. All the clothing we need to keep us warm in the winter, with enough left over to give to those who have less. And the warmth of family and friends to light our hearts for the entire year, no matter what the weather. May you all have a happy, healthy and prosperous New Year.
Posted by Toni at 8:30 PM 11 comments: 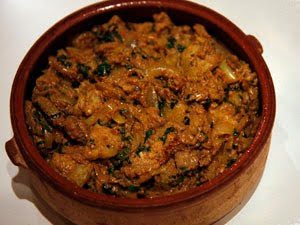 Oh, how I wished this looked as good as it tastes, because it actually tastes quite good. It's the walnuts. I know it is. They made everything tan. But when I served this at a potluck recently, people actually went back for seconds.

But I'm getting ahead of myself.

The potluck: A friend had just returned from a trip to Iran with National Geographic Expeditions. They went to all sorts of places - many of the places that tourists would want to go, and some places up in the north that most tourists never make it to. They visited sites whose history stretches back over 4,000 years. The roots of that civilization run deep.

During the course of this trip, their guide was quite open with them, and they had a chance to ask all kinds of "sensitive" questions. The outcome was not surprising: The news we get in this country isn't the same as what the people in Iran think and feel and know to be true. It's the blind men and the elephant all over again. I don't pretend to have a handle on the truth here, just a great appreciation for some understanding of how the people of Iran view the US - they were overwhelmingly positive about Americans - and how they viewed our respective governments - they felt that the problems between our countries had more to do with government than the people.

A lively discussion followed the slide and video show my friend presented to us. I was delighted to be in the company of a group of people who have traveled widely and who were interested in other cultures and ideas. I was also delighted to be treated to some imaginative food. One woman brought a dish which consisted of lentils, dates, beef and I don't remember what else. I must find out in order to create something in that theme. It was the only other dish which might have been considered Persian. (Just think "lamb" instead of "beef".)

I knew I was going to do an eggplant dish as a compliment to the theme of the evening. And once I understood that eggplant would be my contribution, I immediately thought of combining it with walnuts and pomegranate. Very middle eastern. I searched and found a recipe - I can't remember where - which I followed quite loosely. This is what I copied for the ingredients:

2. Heat 4 T oil in deep skillet over medium heat. Add eggplant, and saute on all sides about 15 minutes or until golden brown. Remove eggplants from skillet, drain on paper towels and set aside. Add remaining oil to skillet, and reheat over medium heat. Add onion and saute for 10-15 minutes, or until golden brown. Add garlic during last few minutes of browning onions, and continue cooking. Add cumin, cinnamon, salt, pepper, turmeric, crushed red pepper, parsley, cilantro and fresh mint, and saute for another 5 minutes. Remove from heat, and set aside.

3. Grind walnuts in food processor until very fine or sauce will be gritty. Combine walnuts with diluted pomegranate paste and honey, as needed, and stir until sauce is smooth.

4. Pour sauce into skillet. Return eggplants and seasoning to skillet, reduce heat to low, cover and simmer mixture for 30 minutes, or until eggplants are tender, stirring occasionally with wooden spoon. If sauce is too sour, add more honey or brown sugar to taste.

OK, so I didn't do this exactly. I didn't get to the store which sells pomegranate seeds, but I did find myself in Whole Foods where I got some pomegranate molasses. I've been wanting to experiment with it for some time, and this seemed like the perfect excuse. I think pomegranate molasses has become my new favorite ingredient! You'll need some brown sugar for this, as the molasses isn't all that sweet, but keep tasting it till it seems right.

Oh, and that step #3 above? That's where everything turns tan. I'm thinking that I'm going to experiment next time with some chopped walnuts and adding some pomegranate seeds to make it look prettier. I'll also use some pomegranate juice in addition to the molasses to have enough sauce.

If you try this one and experiment with it, I'd love to hear how you changed it!