Spicy Fall Stew Baked in a Pumpkin, Pepitos and an Announcement 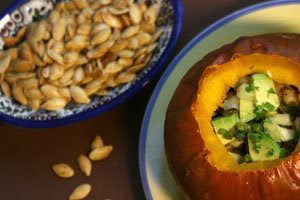 Well, the calender says it's fall, but you wouldn't know it if you stepped outside. Here in San Diego, we've been having a heat wave. I mean.....a REAL heat wave! For someone who grew up on the east coast, this is unspeakable. To deprive me of fall - true fall - is criminal. I may be one of the few people here in San Diego who feels this way, but to me, fall is the very best season of the year. I used to love taking out my sweaters and adding another layer. The days were sunny but the air was crisp. I love crisp. What we've got here is tank top hot. Shorts and flip-flops hot. It's almost November, but it seems like perfect weather for a barbecue.

But I'm not going to let this crazy weather deprive me of my seasonal cooking. I went to the store and they had pumpkins stacked up outside in homage to the season. Everything from tiny orange and white pumpkins to the most ginormous pumpkins I've ever seen. I have friends with a 3 year old son who weighs less than some of those pumpkins. If I had a chain saw, I suppose I could carve one and make a small house for this child. Fortunately, there was a bin with pumpkins which weighed somewhere between 2 and 3 pounds. Perfect.

Periodically, new magazines show up in my clinic. I have no idea how they get there. I never order them, but sometimes they're inspirational. These days, it's the Vegetarian Times. They had a photo on the cover of their October issue which reinforced my decision to eat vegetarian meals a couple of times a week. It was of a beautiful pumpkin, stuffed with a yummy looking stew and topped with an interesting salsa. I looked at that photo and realized that I had never actually baked a pumpkin and eaten it. I've just used it in pies. I've used practically every other form of winter squash in various recipes, but for some reason the lowly pumpkin escaped my attention. Until I saw the photo.

Now, it's perfectly possible to make this stew in any number of squashes - kabocha, red kuri or buttercup are just some possibilities. The only thing which seems important is that you choose one with a skin which is firm enough to hold up. And the added bonus? You get to have some pepitos when you're done making the main dish. I'm amazed that they lasted long enough for me to photograph them!

2. Add tomatillos, hominy, 1/2 cup water, and salt. Cover and bring to a boil. Reduce heat to medium-low, nad simmer, partially covered, 10 to 12 minutes or until tomatillos are softened. Uncover and cook 5 minutes more to thicken stew if necessary.

3. Meanwhile, cut the top of the pumpkin around the stem to make a lid. Scoop out pumpkin seeds and strings. Rub inside of pumpkin with remaining oil and sprinkle generously with salt. Sprinkle cheese on the bottom of pumpkin.

4. Fill pumpkin with stew, then top with pumpkin lid. Place on parchment covered baking sheet and bake 1 1/2 to 2 hours, or until pumkin flesh is fork-tender. Remove from oven and let stand for 5 minutes. Scoop stew including pumpkin into bowls and serve hot, topped with Poblano-Cucumber Salsa. 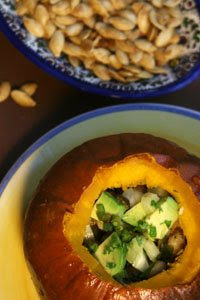 Preheat oven to broil. Roast poblano chile 15 to 20 minutes, or until skin is blackened, turning occasionally. Cool until easy to handle. Remove charred skin, discard seeds and stem, and cut into small dice. Combine with the rest of the ingredients, leaving the avocado for last. Genly fold in avocado and season with salt and pepper.

I didn't have a separate photo of this, but it's what you see on the top of the stew.

As for the pepitos, I rinsed the seeds of the pumpkin, sprinkled them on a baking sheet sprayed with oil, sprinkled sea salt over them and roasted them in the oven along with the pumpkin. Periodically I took them out, smooshed them around and put them back. When they looked toasty, they were done. These are some of the better snacks I've had in a long time! 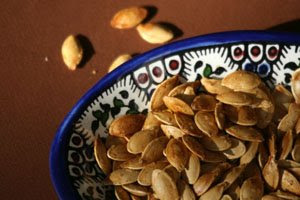 Is this possible???? Can it be??? OMG! It seems to me that I've been working on this forever!!! I can now actually get out of this chair and move around and get back to my garden! For anyone interested in checking it out, here's the link: wanderingeye-photo

I just might have time to start posting more regularly now. I actually made something tonite which is post-worthy for more than one reason. I'll share the story with you next time.
Posted by Toni at 8:49 PM 12 comments:

A quick meal, a lousy photo 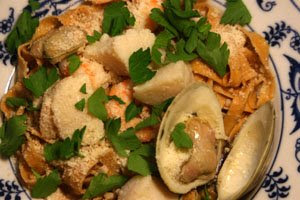 What can I say? It's been difficult for me to take the time to photograph the food. I'm usually starved by the time it's done. I find myself working away at the computer for hours until my butt tells me it's time to stand up and move. Then I move to the kitchen, throw something together from whatever I've got around and get back to the computer again. The only saving grace is that I love to shop for food. For some women, it's shoes, and while I also love shoe shopping, Trader Joe's, Whole Foods or Henry's (our Wild Oats) is where I prefer to spend an hour or so. Hey - it's cheaper than a pair of Jimmy Choos!

I finally figured out how to make the different galleries for my website. Now I'm involved in the tedious details of that task, and I'm not a woman who relishes time spent in the details. But when I look at a completed gallery......well, I'm hooked. So I plod on. I'm not sure it's the best way to maintain a critical eye, this plodding. But it IS a way to get the job done.

So in the meantime, I turn to my pantry and find a package of red chili fettuccine. Fast and spicy - gotta love that! That prompted a trip to Point Loma Seafood - the best seafood in San Diego. Besides, it got me out of the house! A few clams, some scallops and shrimp and a bottle of clam juice and I was set to go. Is there anything easier than fettuccine with seafood?

Saute some garlic in a glug of oil. Canola is actually better for this, as it can be heated to higher temperatures without changing it's chemical structure, and therefore losing it's health benefits. Add some clam juice and white wine. (One for me, one for the pot.) Add fresh clams if you have them - canned if you don't. Or if you've got a small army to feed, you can add a can of clams in addition to some fresh ones. Cover the pot and reduce the heat. Cook until the clams open - about 6-9 minutes, depending upon the size of your clams. When the clams start to open, add the scallops and shrimp, stir and cover the pot again until the clams are done.

While you are doing this, you should have the pasta boiling. Drain when it's al dente, and that timing depends upon your pasta. Add the drained pasta to the sauce, stir to coat, season to taste with salt and pepper and divide into bowls. (One for me, one for the cat.) (Only kidding!!) Grate some fresh parmesan cheese over the top, sprinkle with fresh parsley, and force yourself to stay away from the computer while you eat!
Posted by Toni at 8:38 PM 8 comments:

Email ThisBlogThis!Share to TwitterShare to FacebookShare to Pinterest
Labels: fettuccine with clams, shrimp and scallops

A Project, A Hiatus and Fall Vegetables

It's been a while, I know. I've been consumed with work on my photo website. You see, for someone who travels for pleasure rather than for business, and for someone whose passion is photography, I get a lot of complaints from people. "When can we see your pictures? When do we get to see the pictures of your trip?" You've got to understand, this has been going on since 2006 when I went to Vietnam. I had given 2 slide shows prior to that (yes - actual slides!) of my trips to the Galapagos and to Turkey. People seemed to like them. (No pictures of "Here we are in front of the Blue Mosque")

Now that I've gone digital - no slide shows. But people still want to travel with me without having to get on the plane, you see, and that's fine with me. I just haven't had a vehicle to share these images with others. I don't have a digital projector, and even if I did, I'd be clueless as to how to use one. So the best I can do is work on a website. That's something I know a little about, having created one for my business.

But a photo website is a little more complicated, it seems. It takes everything I've learned plus more. So I've hired a web geek to help me out. Of course, I'm not her only client, and it's been slower than I'd like it to be. But we are inching forward. To give you a tiny teaser, here are some school kids I photographed in Shalimar Gardens in Srinigar - the capital of Kashmir: 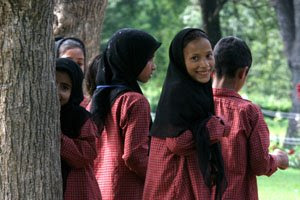 These kids, plus another group who sat in a big circle on the grass and clapped and sang for me, touched my heart. They were smiling and warm and they loved having their pictures taken. 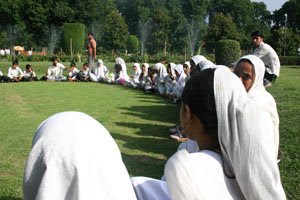 So I'm working on this website, and out of the Kashmir section of the website I hope to develop a project to take to Microsoft or Qualcomm here in San Diego. Get internet access to these kids and their schools and teachers and parents - either via cell phone or through computers. That way, when violence erupts, as it has since I've left, and the schools have to shut down, the kids can still get an education. I have no idea how this will happen. But I don't need to know how. I just need to focus on the results I want and keep working.

So you'll forgive me, I hope, for not posting too many recipes recently. It's not that I've been out of the kitchen. But I confess I've turned to store bought roasted chickens or cooked shrimp, and I've just been adding some side dishes. Like this wonderful recipe for roasted vegetables in harissa marinade. Perfect for fall, perfect for when I need to spend more time in front of my computer than in the kitchen. 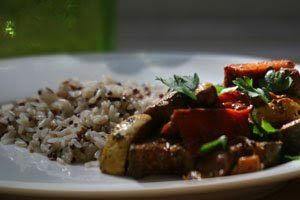 Harissa is a North African garlic-chile sauce used to flavor couscous and stews.

2. Arrange veggies on a baking sheet, brush with remaining 2 TBS olive oil and harissa mixture. Roast 25 minutes or until veggies are tender, turning once. Serve over couscous or rice.

I didn't have asparagus, but I did have carrots. And I didn't like the halved zucchini idea, so I chunked mine. This dish lends itself easily to anything you've got in the fridge which could be roasted. If I had had any mushrooms, I would have thrown them in as well.

Addendum: If anyone has any bright ideas which would help me with my project, I'm all ears! You can contact me through my email. Thanks in advance for any help you can give.