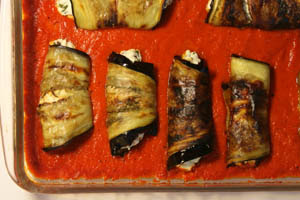 Is it possible? Have I really been doing this for a whole year? Yesssss!!!! As of today, it is one whole year! I don't know why I started this blog. Really, I don't. I know that it was a year ago this month when I first published my website for Mission Valley Acupuncture. But what got me started on a food blog? I think it was a combination of loving to cook and also thinking about the relationship between food and health. Seemed like a natural fit at the time.

That's what got me started. But what has kept me going?

I didn't realize back then how many incredibly talented people were out there blogging about food. The photography, the writing and the recipes blew me away when I began to investigate other people's blogs.
I'm both ecstatic and humbled to be a part of this incredible community which spans the globe. I love the idea that I have friends in places like Brazil, France, Italy, Mauritius, Australia, Barbados and England, as well so many states here in the U.S. And it has been your comments and encouragement that has kept me at this. I no longer just cook for the love of it. Now I cook and then photograph and then write. And for a one-woman band, let me tell you - that takes some encouragement. So thank you.

You not only have encouraged me to continue this blog, but because of that encouragement, you have also spawned meals that might not otherwise have come out of my kitchen. After all, I can't blog too often about leftovers. Pasta and chicken. Rice and chicken. Soup made out of anything I've got that's nearly gone in the fridge. Is that worth a steady read? I think not.

So thanks to all of you, I'm starting this new year of blogging with something I might not have tried otherwise. Since I'm often the only one who eats my cooking, I probably would have passed on this one, thinking that it was more work than I wanted to do on a rainy Saturday. But wait! It's a rainy Saturday! What else am I going to do? (Clean my house, but that isn't nearly as interesting!) Besides, try saying "blogaversary cannelloni" 3 times very fast! Gotta go for it, right? 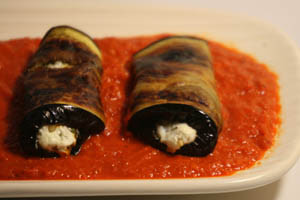 I got this recipe from epicurious, under their "healthy eating" section. I loved the way it looked, and when I examined the ingredients and noted that the red sauce was NOT tomato based, but red pepper based, I was in. But you know the drill......You know that I'm incapable of following the recipe. I've decided that I like Terry B's format over at Blue Kitchen, of adding "kitchen notes", where I do my 'splainin'. Check it out.

Heat oil in a medium skillet over medium heat. Cook shallots and garlic until soft, about 1 minute. Reduce heat. Cook until golden, 3 to 5 minutes. Add peppers and juice; bring to a boil. Lower heat; simmer until peppers are soft, about 5 minutes. Cool. Puree in a blender. Pour into a 9" x 13" baking dish. Coat eggplants with cooking spray and broil on a baking sheet until golden on both sides, about 15 minutes. Heat oven to 400°F. Mash cheese, olives, capers and 1 tablespoon of the parsley in a bowl. Place 1 tablespoon of filling at the end of each eggplant slice; roll up. Lay seam side down in dish. Bake 10 to 15 minutes. Top with remaining 1 tablespoon parsley.

Kitchen Notes: I used one eggplant and one jar of peppers. I did't use cooking oil spray - I used canola oil and spread it on the eggplant by hand. Naturally, I had to add some heat to the sauce. I love the combination of spicy and sweet, so I added a good tablespoon of Hungarian paprika to balance the sweet peppers and orange juice. And then there's the matter of the filling. I was uncertain about the combination of kalamata olives and capers. Salt and salt. So I did an experiment. I did some as per recipe, some with only capers, and some where I added pine nuts. (Why not, I ask?) Which is best? You decide!

NB: Even though the date shows up as Saturday, January 5th, I published this today, Sunday, January 6th!
Posted by Toni at 5:07 PM

Congratulations on your blogiversary -- blogging for an entire year is a huge achievement. I'm looking forward to year two of the Daily Bread Journal.

I'm glad that you started bloging. I think it's wonderful that we push ourselves beyong our comfort zone. This dish looks very elegant and very appropriate to mark a year of blogging.

I'm looking forward to reading more interesting posts from you :-)

Lydia and Nora - Thank you both! I'm so glad I discovered your wonderful blogs - I've been inspired by both of you!

I like the kitchen notes idea! And I love your style, Toni.

Happy Year One, Toni! I just bought an eggplant thinking I would make baba ganoush and another recipe. Now I will have to do a rethink. I love these kind of roll-ups, better still prepared w/ eggplant. I am so torn!

Happy BlogAnniversary Toni, there isn't better food to celebrate than cannelloni ahahaha!
The translation is ready for you.
bye bye

Mimi - Thanks so much! I'm flattered that you like my style....Your blog always makes me want to do better.

Susan - I adore baba ganoush, so I understand the dilemma. Maybe next time?

Ady - I agree! In fact, ANY Italian food would be a perfect way to celebrate! I'll check out the translation - thanks!

I am so with you on the gratitude for the food blogging world. I am inspired everyday and impressed even more.

Happy Blogaversary Toni! I can't believe it's been a year already! What a fitting, and delicious, recipe to celebrate with. I can't wait to see what the next 12 months bring :-)

that looks so great! i definitely thought it was tomato sauce at first too -- delicious!

Ann - Thanks! These actually didn't take that much time and were definitely worth it!

Katy - Welcome, and thanks for stopping by my blog! I think your cardamom ice cream would make a perfect dessert to go with this dish - don't you? ;-)

Happy blogiversary, Toni! You're absolutely right that blogging about food makes you think about it more and explore areas you might not otherwise go. For me, just reading other food blogs [especially such well done ones as yours] has made me a better, more adventurous cook. I look forward to your coming year!

Happy anniversary! and we both share the same blog-anniversary-date :)

I'm so glad that I discovered your blog and I look forward to many more of your delicious posts.

Thank you for your continued support and encouragement.

Terry - Thanks so much! I'm flattered that you find my blog well done. Yours has been one of my inspirations!

Cynthia - Thank you!! I didn't know we shared the same anniversary date -- Happy Blogaversary to you, too! I must say the same to you -- thank you for your continued support and encouragement. Coming from you, it means a great deal to me.

My darling Tia Toni!
WOW! That year sure flew by! I am so excited for you!

All my love,
NR

When you come visit your parents, email me!

Rachael - Thank you! And thank you for all your help -- you be da bomb!

Man! I am always late for everything! For this one I need a hand slap. You have been here for me since day one! Happy, happy, happy blogiversary. I love your blog and what you've done with your blogging. Here's to many more years....:)

Happy Belated Blogiversary!
(slinks off to corner to hang head in shame)

I have seen similar recipes Tont. This gives me the inspiration to try this very healthy dish :D