Have you ever been to a Fancy Food Show? This was my first experience, and OH....MY....GOD! I thought I had died and gone to heaven! But no - this was at the convention center in downtown San Diego. 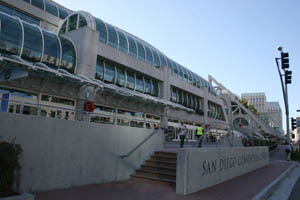 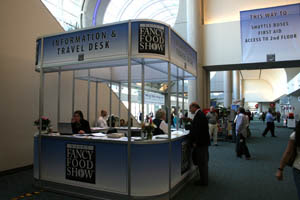 I have a friend who started Dufour Pastry Kitchens, a high-end, gourmet line of hors d'oevres that are quite simply out of this world. She got me the badge to get into this show, and told me that she thought I'd like it. It was all about food, so I figured I was in for a good afternoon, right? Understatement. Like, major understatement. Her husband's greeting set the tone for the rest of the afternoon. 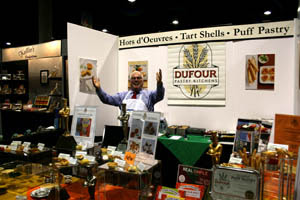 As I walked through the aisles at the convention center, I discovered the international section. How can you not love a show that has about 6 aisles devoted to Italian foods? 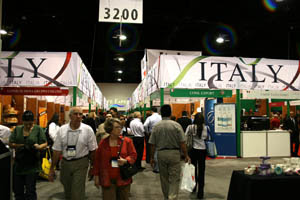 God bless the Italians! They were all dressed beautifully, and stood around drinking wine out of glasses, not plastic. They weren't selling wine, mind you. They were just drinking it. Because....... well....... because! I mean, what else would a civilized person do to pass the hours during a food show? They had booths in which they cooked and served pasta. Others just had displays that just made you wish you had a nonna instead of a grandma - one who simmered her own secret sauce for hours on a Sunday. 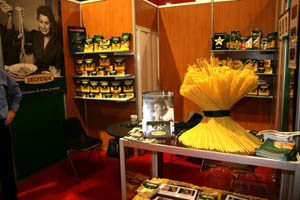 I never could quite figure out what the Chileans were selling. I expected seafood and wine, but didn't see either one. Still, their business seemed brisk. 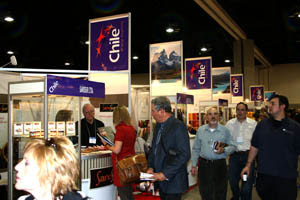 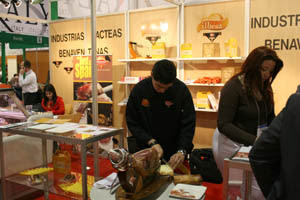 And then I discovered this booth. My knees went weak. It was all I could do to keep from moving in. 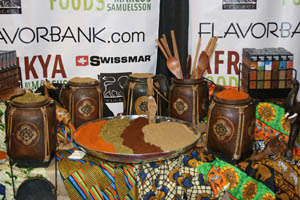 Before this, I confess I hadn't heard of Marcus Samuelsson, his restaurant Aquavit, or Jennifer English. But I live in San Diego, not New York, so perhaps I can be forgiven? At any rate, I have become a fan. A devotee, if you will. The next time I visit New York, I will have to eat in his restaurant. Not only are these spices to die for, but Jennifer and her business partner Patricia were 2 of the nicest, most generous women you could hope to meet. They were kind enough to give me a sample of his harissa, and another mixture he calls berbere, as well as several of those amazingly long sticks of cinnamon you see in the photo above. I haven't been able to wipe the smile off my face since! This shot was taken the first day of the show, when Jennifer was doing an interview for a radio show..... 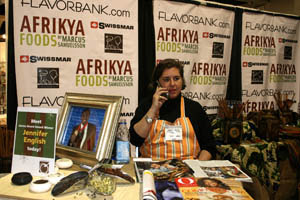 And thanks to my friend, who gave me 2 ginormous boxes of her frozen pastries to take home with me! She was getting on a plane and heading back to New York, so she had no use for them. Well, I certainly did! I went to a friend's birthday party on Friday nite, which was a pot luck. "Luck" was the operative word for those who attended. These little puppies were scarfed down in a heartbeat! There were a few left in the box, as we didn't have enough cookie sheets to heat all of them at once. When I asked the birthday girl if she wanted the rest of them, you'd have thought I had just offered her an original Van Gogh! 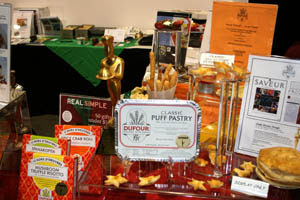 As for the other box? Well, that will be for my birthday party this coming weekend. ;-) Oh, and just in case any of you want to order any of these, you can visit her website Dufour Pastry Kitchens. They make heavenly gifts!

For information on health, visit Mission Valley Acupuncture
Posted by Toni at 1:06 PM

Hi Toni thank you to blossom us,
Italy is a wonderfull country but I like to visit other place too.
Kisses

And love to Judy!

Ady, honey, I blossom Italy as often as possible, because I love, love, love your country! But yes, it is always good to visit other places. It is a big, wonderful world, after all.

Rachael - Thanks for the almost b'day wishes!

This sounds so freakign awesome Toni! I think that I can admit that I am sooooooo jealous! Sounds like the bestest pre-birthday ever! Have a happy birthday!

What a wonderful day! I was at a restaurant show 20 years ago...It didn't begin to compare with this, and I thought THAT was fantastic!

What a great day! Thanks for sharing, Toni. Have the greatest birthday!

Katie - After having been to this one, I'd be VERY curious about a restaurant show!

Susan - Thanks! It'll be a pot-luck party. Too bad you live so far away - I'd be delighted with ANYTHING that came out of your kitchen!!

One day I hope to attend one of these shows.

Cynthia - You would LOVE it!!

Hi Toni,
That sounds like a lot of fun. A similar show that we have in Sydney is the Good Food and Wine Show. I usually go there from 11am till closing time. I start off with the food section and finish off with the wines. Most things are for tasting so it's great to be able to try the food and wine before purchasing them.

Berbere spice mix is lovely. Everyone does it differently, my ex-colleague made his Ethiopian version which I rubbed (with some crushed garlic) on a whole chicken and left in the fridge overnight before roasting it. It was the best roast chicken ever! I would love to try making my own berbere.

Glad to have stumbled across your comments...Lucky you for living in San Diego...and for the rest of us that the show was there this year. I go every year...and I can tell you this. The acai fad seems to be fizzling...and the Wild Mushroom trend seems to be stronger than ever.