Happy Chinese New Year! It's now the year of the Rat. According to Wikipedia, the Rat "was welcomed in ancient times as a protector and bringer of material prosperity." I have no idea how they decided that Rats brought material prosperity. Frankly, they give me the creeps. But then again, when you read about them from a Chinese astrological viewpoint, it makes you think maybe they're not so bad after all: 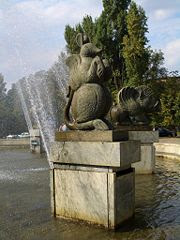 "Being the first sign of the Chinese zodiacs, rats are leaders, pioneers and conquerors. They are charming, passionate, charismatic, practical and hardworking. Rat people are endowed with great leadership skills and are the most highly organized, meticulous, and systematic of the twelve signs. Intelligent and cunning at the same time, rats are highly ambitious and strong-willed people who are keen and unapologetic promoters of their own agendas, which often include money and power. They are energetic and versatile and can usually find their way around obstacles, and adapt to various environments easily. A rat's natural charm and sharp demeanor make it an appealing friend for almost anyone, but rats are usually highly exclusive and selective when choosing friends and so often have only a few very close friends whom they trust."

Hmmmm....I wonder if any of them are running for President now?

When I moved to San Diego to study Oriental medicine, I didn't know much about Chinese New Year. I had just come from 12 years of living in New Mexico. What did Chinese New Year have to do with enchiladas? I didn't even know that I was born in the year of the Rooster. I had a Rooster named Napoleon in New Mexico, but to this day I don't see any resemblance between his behavior and mine. So Chinese New Year took a little more getting used to than Chinese food. But once you start getting used to the colors and the symbols of it, it starts to be fun. I'm looking forward to having Dim Sum with some friends this coming Sunday, and going downtown for a Chinese New Year celebration next weekend. After all, who doesn't love the idea of another new beginning?

During the Chinese New Year, which begins on the first day of the first lunar month of the Chinese calendar (this year, that's Feb. 7th), and lasts till the 15th day, it is a custom to decorate with red, wear red, and give red envelopes with money in them. Red is a good luck color. Fortunately, it's a color I can wear. The house is cleaned in order to ensure a clean, new beginning. However, cleaning the house after New Year's day is considered bad luck! (2 weeks off!!!) Opening windows and/or doors as well as switching on lights at night is considered good luck. Here in San Diego, that isn't a real problem during the day. Of course, if you live in the northeastern U.S. these days, it would be quite a challenge to be opening your windows and/or doors, considering the temperatures. Um...maybe for a second?

Various foods are traditionally served as well, including fish, noodles, manderin oranges and sweets. I didn't even look this one up before I decided it was time for salmon. It had just been too long since my last one, and I felt the necessity. Besides, when I was at the Fancy Food Show a few weeks ago, I scored a tube of something called "berbere". I hadn't heard of it before (provincial!), but now that I have some, I don't want to be without! I've made 2 different dishes with it so far, but let's start with my good luck Chinese New Year salmon... 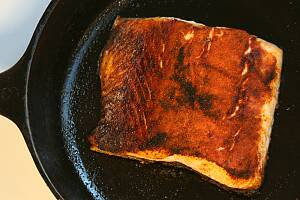 No recipe. Just sprinkle some berbere* (See Kitchen Notes below) on some salmon and plop it in a pan with some canola oil. I started this on the top of the stove and finished it under the broiler. Half of it was eaten tonite with some garlic mashed potatoes and a salad. The other half will be my lunch tomorrow, topping another salad. And you wonder why I don't post more often? But fear not. I have more recipes with foods from Asia coming soon. In the meantime, I mentioned that I'm a rooster - what's your year? 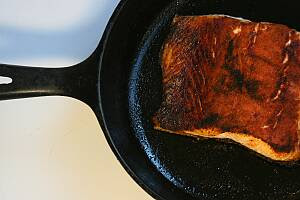 Berbere is a combination of spices. Mine is sold under the label "Afrikya", by Marcus Samuelsson. It contains paprika, chipotle chile, fenugreek, ginger, cardamom, nutmeg, allspice, cinnamon, garlic, and...spices?

And, as usual, if you want more health news, visit Mission Valley Acupuncture
If you want to share which natural remedies work for you and which don't, visit Second Opinion
Posted by Toni at 9:05 PM

Happy new year! I am year of the dragon. When I lived in Boston during my 20's, I worked in a publishing company in Boston's Chinatown, so celebrating the new year was a big event even for those of us who were not Chinese. To this day, it's one of my favorite February celebrations, because it's always about looking forward.

Lydia - How lucky for you to have that experience! Here's to looking forward to a year of wonders, delights, health, prosperity and sheer magic!

(Still egging The Ombudsman on to spend a weekend in SD...will keep you posted)

Cynthia - The same to you! May this year be one of prosperity in all it's forms, for all of us!

Happy New Year to you and your family too! Thanks for sharing that wonderful experience!