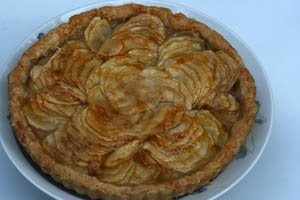 I keep having the mistaken idea that someday I'll "catch up". Like, catch up on my reading, or catch up on paying off the credit card bill, or catch up on the housework. Now, it doesn't bother me much when it's a pile of laundry that doesn't make it to the wash. After all, it's not going anywhere, and chances are I've got other clothes to wear. But when it comes to paying bills - now that bothers me. I grew up knowing that "debt" was a four letter word, and I can't stand it when I can't pay off the full amount of the credit card. But I'm also someone who was born with a travel gene. They might not have mapped it yet in the human genome, but believe me, it's there. So the credit card bills don't get paid off in full every month. But I AM going to India again this July.

India in July? Why would you do that you ask? Because my nephew has met a wonderful woman from the state of Tamil Nadu in southern India, and they are getting married. That seems like a very legitimate reason, if you ask me. And so I work harder at paying off the credit card bills before I leave, so I will have a fresh slate, as it were.

The other side of me loves to be at home. Especially when it's nice out and I can work in my garden. People ask me, "What have you been doing recently?" The answer is in these photos. 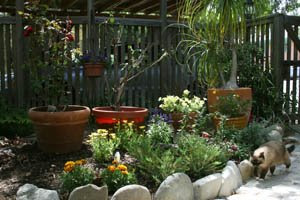 The paths, the stones around the edge, as well as about half the garden space itself has been created in the last 6-7 months. Oh yes, and the plants too. Before I did this, there was an old deck out front. Termite heaven! I kept putting potted plants over the holes in the deck until one day I decided that it would probably be a better idea to get rid of the deck before someone went through it. With the help of a friend, we hauled the mostly rotted boards off to the dump, and when we returned, I was faced with an expanse of dirt with some pretty hefty tree roots snaking their way across the space. 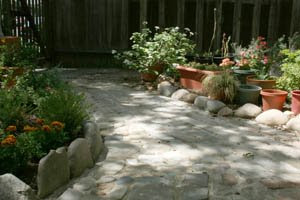 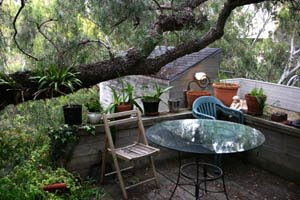 Once the paths were created, I enlisted the help of another friend to haul stones off the beach. I had gone off and found about 8 large, somewhat flat-ish rocks which I hefted a couple of hundred yards and made a pile. Then my friend and I drove his truck as close as possible and spent time carrying the stones up the hill and into his truck. We dumped them in my front yard and then it was up to me to decide how to use them.

I'm a very visual person. I need to lay things out and see them, and then I know if I like the idea or not. That's not a bad thing - it just is what it is. But of course, when you're dealing with what essentially amounts to hundreds of pounds of stone....well, you get the idea. But on the bright side, I don't need a gym membership!!

So after the stones were in place, and bags and bags of dirt were thrown in to raise the beds, I got to have some FUN! COLOR, PLEASE!!! Do they have a 12 step program for plant addicts? Perhaps there should be one. As someone once said, "I can resist anything but temptation." So when I saw these lemon drop petunias at home depot, could I resist them? 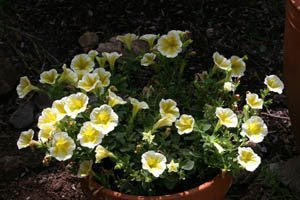 Yellows, purples and blues began expanding into oranges and reds. The other side of the path is thick with pinks and salmons. And next to my front door, I clustered all my pots of herbs. 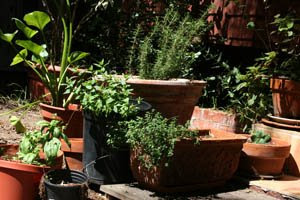 Like I said, with all of this lifting, hauling, digging and dragging, I don't need a gym membership. A manicure, perhaps, but not a gym membership. And the upside of it all is that I can eat more sweets. So when I looked in my fridge and noticed I had a bunch of apples in there, I knew I needed a recipe that called for lots of apples. It could have been applesauce, true. But then I saw a photo of an apple tart tatin on the Food Network, and as I mentioned, I'm a very visual person. And besides, apples are easy to lift compared to stones! 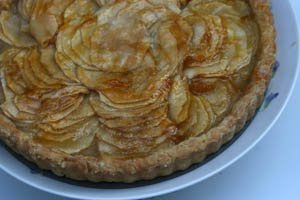 On a lightly floured surface roll out dough into a 13-inch round and fit it into a 10-inch tart tin with a removable fluted rim, trimming the excess. Arrange the apples decoratively on the pastry shell, overlapping them. Sprinkle the sugar on top of the apples, top with butter slices and bake in the middle of the oven for 45 minutes or until the crust is cooked through and the apples are golden.

Brush with the heated apricot jam while the tart is still hot. Serve each portion with a scoop of vanilla ice cream.

I didn't use store bought puff pastry dough. I used the dough that I had used for my Spinach Ricotta Tart that I had made back in April. I've made tarts with puff pastry before and they've been good, but this particular recipe really did it for me.

I've been away for a while, and you, dear readers, have been busily creating sensational dishes. I took off for Memorial Day weekend and went to New Mexico. When I got back my practice was overflowing, with lots of paperwork to catch up on. (There's that catch-up thing again!) And then we had a power outage. In the middle of doing a post, the power went out for a day. I was so busy trying to eat all the food in my fridge, I didn't have time to photograph or write! I'm back for now.........That is, until I go to India...........

Your garden looks beautiful -- and well worth an apple tart!! I love playing with stone and plants in my Rhode Island garden, too.

Toni, that sounds like a plan! I hope you have loads of fun in India and also that your nephew has a wonderful ceremony.

You garden is heavenly and so is that apple pie!

You've done a terrific job, both garden- and tart-wise!!

More often than not I am in a catching-up mode too. But then again, sometimes it feels just great to play hooky (every once in a while) and take in each moment as it is: no rush, and - consequently - no stress. Miraculously, but this also helps to appreciate busy times anew.

Yay for your upcoming trip to India!!

Traveling to India sounds so exciting! From what I've read, Indian weddings are days-long extravaganzas. And the food!

Enchanting garden wonderland, Toni. A perfect spot to serve that dreamy pie of yours.

Lydia - Thanks! Stones and plants worked for me in New Mexico as well!

Patricia - Thanks so much!

Anya - Oh trust me, I play hooky too! I make sure to schedule in some "do absolutely nothing" time. I think they'd have locked me up by now if I didn't!

Susan - All I know is that when I emailed my nephew, he told me that there would be food for 1,000 people. Anything left over would go to the needy. Is that amazing?

I think after the heat of India, I will need to spend time in my enchanting garden!!

I hope the trip to India goes well-my wife is from Tamil Nadu! I think you'll enjoy your visit. :-) Also, beautiful garden (and pie!)

Mike - Well, well....it's that "small world" thing again! I'm sure the trip will be fine. This will be my second trip - first one to the south.

Your garden! I'm coming over for a nap, ok?? And bring me a piece of that pie, ok? Gorgeous! Oh, I am jealous for your trip! I've never been to India...really want to. It's wonderful that you are busy and happy!

Catherine - C'mon over, girl! You can help water and weed and fertilize and cut back and haul away! ;-)

India in July sounds perfectly sensible, Toni. Of course, I've gone to New Orleans in July a couple of times. Great job in the garden!

Terry - Sensible? Not sure about that. But it is what it is, and I'll have a great time. I'm sure of that!

You worked really hard on your garden - it looks great! The apple tart looks delicious. I bought a 12kg crate of apples recently when I took a short trip in the mountains, so there are lots of apple desserts coming out of my kitchen :-)

And have a wonderful trip to India. Will the wedding be a traditional one that lasts 3 to 7 days?

I wish I had a green finger like you!
Have fun in India & leave a piece of your pie before you take off!

Nora - Welcome back!! Good luck with all those apples! The wedding will only be 2 days. Perhaps because it's monsoon season - I don't really know.

Valentina - I will have a blast in India, I'm sure!

The food and garden llok lovely. If only mycredit card debt was erased I'd be traveling all ove tht eplace too. Have a sfae trip.

Courtney - At this point, I'm figuring that my credit card debt will never be erased. Hope I'm wrong, but I don't see it happening. Fiddle-dee-dee!!

Your garden is wonderful! I love your rock edges, such a nice finish! I look so forward to your stories and pictures of your India trip!
Can't wait!

I so want to hang with you in this beautiful garden area and chat! :)

Looks much nicer than mine!