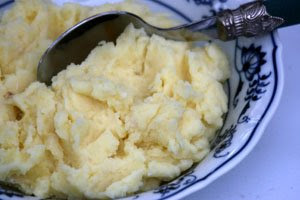 OK, I know I'm into this yin/yang thing lately. But I just can't help it when it comes to mashed potatoes. It's a case of a good idea that just begged to be expanded. And since it's the day before Thanksgiving, I thought I'd add this little idea to the menu, as well as some ideas as to how to not gain weight over the holiday season. Do those two things go together - mashed potatoes and not gaining weight? I'll try to connect those dots.......

This basic recipe is so simple it's hard to call it a recipe. But that's what we need during the holiday season - something simple enough so as not to be stress-inducing. First of all, there's the question of what kind of potato to use. You can actually use russets, but I prefer Yukon Gold when it comes to mashed potatoes. There's something so utterly creamy about the texture of Yukon Gold potatoes, that it takes this comfort food to an even more comforting level, if that's possible.

I'm not going to be good with amounts here, and after all, it does depend on how many you'll be feeding or how much you want leftover. I started with about 2 pounds of peeled potatoes and put them in a large pot of water. I added about a tablespoon of minced garlic - out of the jar this time. (I told you this was going to be a de-stressor!) Brought it to a boil, turned the heat down and waited. When the potatoes were soft enough to be easily pierced by a knife, they were done. You don't want your potatoes mashing themselves in the pot, and you don't want mash-resistent lumps. I strained them through a fine seive rather than a colander in order to keep the garlic with the potatoes.

The only thing left was the mashing, which I've always always done by hand. If you prefer to use your food processor, great! I'm just old fashioned when it comes to mashing potatoes. The only thing we add to mashed potatoes is butter and milk - right? Well, these days I use Earth Balance, and just a dab of butter for that extra rich flavor. You won't notice that it's not all butter, and your arteries will thank you. For the milk, I used buttermilk.

Why buttermilk? It adds a tangy interesting flavor to these potatoes, and despite it's name, it happens to be low in fat. (Whoever named it should be examined!) No, I don't drink the stuff, and in fact have a hard time watching anyone else drink it. But when it comes to cooking, there are some dishes which just shine a little brighter with buttermilk in them.

But then you're left with a problem. What do you do with the extra buttermilk? Well, one possibility is that you make some mashed potatoes.

Huh? I thought I just did!

Ahhhh....but did you use blue potatoes?

I'm reminded of a George Carlin routine where he asked "Where's the blue food?" Other than blueberries, it's hard to come up with food that's blue in color. Except for those lovely, deep deep blue potatoes. I had roasted some of them to go with my roasted veggie medley, but I still had some leftover. I was standing at the counter mashing those Yukon Golds when I happened to notice that bag with a few blue potatoes left in it. Hmmmmmmmm..... I wonder what they'd taste like? So I repeated the above process with the blue potatoes.

Do you know that when you peel blue potatoes, you can get a mostly white looking potato? I had a moment of panic, thinking that all the blue was really in the skin, and that somehow it transfered to the potato during the cooking process. But no! When I cut them in half, there was that almost purple center. And you know what? They made an absolutely scrumptious batch of mashed potatoes! For those of you who are color obsessed, or just want to surprise someone with something different, give them a try. I think you'll be pleasantly surprised. 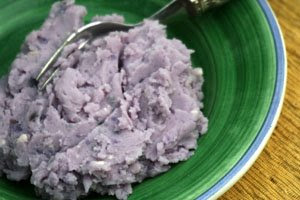 And now, how do you keep from keeping those mashed potatoes with you into the New Year? Well, for one thing, you might try going for a long walk before you sit down to eat your Thanksgiving dinner. You'll find yourself a little less hungry that way. Start your meal with a glass of water - a good way to hydrate and an antidote to the wine. Then - and this is the hard part - you have to say to yourself that this isn't the Last Supper. You can actually get by with only one spoonful of anything, and if eaten slowly, you will find yourself full by the time you finish your plate. And remember - only one plateful per meal. You don't really need that second helping!

And speaking of your plate, did you know that the size of the dinner plate in America has gone from 9" to 12"? Back when your parents were your age, dinner plates were smaller. So when people filled their plates back then, they naturally ate less. They also walked more in those days, since not everyone owned a car, and many people lived in houses with stairs. So daily life included a lot more mobility than we have now. These days, we drive a heavy, expensive vehicle about 3 blocks to buy a loaf of bread. Maybe you cut down on your driving when gas prices were skyrocketing, but now that they've gone back down again, are you still walking? Don't give up the habit. It's one that will stand you in good stead for the rest of your life.

Have a very happy, healthy and safe Thanksgiving!
Posted by Toni at 7:35 AM

I can't imagine Thanksgiving without mashed potatoes of some variety, but I love the purple ones and the beautiful color that adds to the holiday table. Happy holiday to you!

How funny, Toni! I was going to suggest buttermilk as an alternative and you beat me to it. Happy Thanksgiving, my friend.

Happy Thanksgiving my darling AT!

Lydia - Yes, mashed potatoes are a must! Purple is kind of a nice twist on the usual color. Happy Thanksgiving to you, too!

Terry - Great minds think alike - what can I say? ;-) Happy Thanksgiving to you, Marion and family.

Toni, you are a star! Your mashed potatoes are superb, and your tips on mindful eating bonanza are just so timely. I particularly love 'remember it's not the Last Supper' bit! It makes me reassured; and I'll make sure I remember it before intoxicating myself with yet another piece of pie. Happy Thanksgiving to you!

Happy Thanksgiving to you! The buttermilk idea is great. Now I'm off for a walk...

I have to have potatoes, even if I have to KILL for it! ;)

I have eaten these potatoes, but never mashed. Thanks for the inspiration!

Happy Thanksgiving Toni! We miss you!

Buttermilk and blue cheese! Thanks Toni! I'm going to give that a try.

Anya - Thanks! I actually managed to practice what I preached this year! I think this is the first year that I haven't gained 2 pounds at Thanksgiving!

Susan - Thanks - Yes, there's something about mashed potatoes followed by a walk that makes for a special Thanksgiving!

Diane and Todd - I had never mashed them before, either. It truly did come from playing with my food!

Jesse - Thanks so much, and thanks for stopping back at my blog! I love having a large blog family!

Cynthia - I didn't add the blue cheese, but OMG, that's a must! Thanks for the inspiration.

Thanks for the recipe. Sounds terrific!

A little recommendation, I found these to be so delicious and useful in my kitchen: http://bajoseasonedsalts.com/

What a great idea to use blue potatoes for your mashed potatoes!