Gravel, A Birthday Party and Empanadas

Sometimes it takes a special occasion to really do some work around the yard. 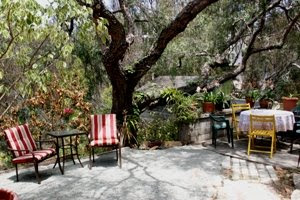 Actually, it usually takes a special occasion for me - and this was a very special occasion. My friend Mary turned 94 on the 14th. Now for many people who know her, she's kind of a "mom", but for me, she's my friend. I've never thought of her as a mom, even though my own mom died in 2002. Mary is a woman with a sharp mind, a great sense of humor and a love of people. She's really the matriarch of our neighborhood, and as I said to one of the guests when everyone else had left, Mary is like the hub of the wheel, and all the spokes radiate out from her. She's the center of our little community, and I love hosting her birthday parties. We all gather together and catch up, and we keep our neighborhood together, thanks to Mary.

So this year in preparation for the party, I concentrated my efforts on the side of the yard. I found myself digging and hauling and shoveling, moving stones and cement and gravel and sand. I hired a guy to do the really heavy shoveling - I had gotten 2400 pounds of gravel from Home Depot. Curbside delivery only. I figured it would take about 3 hours to shovel all that stuff into a wheelbarrow and then dump it on the dirt at the edge of the path. This guy did in in a half hour. I told him "You run the wheelbarrow and the shovel and I'll run the rake." We whipped this job out in no time!

So a neighbor showed up with a bunch of chairs and some mozzarella with tomato and basil, and everyone brought something to share. The party was on, and no one was more delighted than Mary. Even though she specifically said that there were to be no presents, not everyone pays attention to those details. So she got a new hat...... 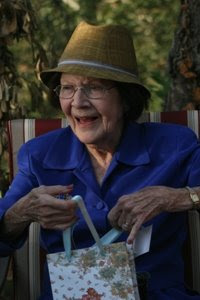 And some hooks to hang things on. But they didn't really look like hooks, so Mary began goofing around, pretending to be smoking a pipe...... 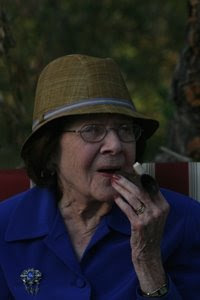 We started the party at 4:30 in the afternoon, because the only medical condition Mary's got is macular degeneration. So it's easier for her to see when it's light out. By the time the majority of the guests left, it was around 9:30 at night. It had grown chilly by then, but I had lots of shawls which I passed around to all of the women. One woman wore a shorter dress, so for the last hour or so, I loaned her a pair of pants to put on under the dress. Another woman needed an extra layer on top of the pashmina, so I threw a jacket over her shoulders. Even one of the men got cold, and I had a jacket that a friend of mine had given to me when I was visiting him a few years ago. By the end of the evening, I looked around the circle of guests and saw my closet spread out before me!

For the "main course" - if there is such a thing at a pot luck - I made empanadas. I decided to make 2 different kinds - chicken and beef - because I'm never certain if everyone will eat beef. (This is California, after all.) Also, I needed to make one kind that wasn't spicy. Oh, that was hard!!! But I did it. I looked at several different recipes and then basically did my own thing. This was the first time, however, that "my own thing" included tweaking the recipe for the dough. I'm quite comfortable making up recipes when it comes to cooking food. I have never been comfortable, however, changing anything when it comes to baking. This time, however, I had 2 different recipes for empanada dough, and they were quite different. One had more flour and less salt, the other had more salt and no additional egg whites. (Or was it yolks? I don't remember!) They had different amounts of water and vinegar, too. So I "punted". I kinda sorta did something in between, and it worked beautifully. Whew! 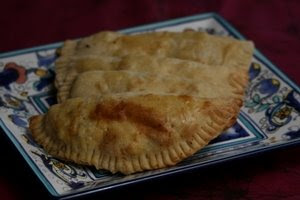 So here's the tweaked version of one of the recipes:

Pat chicken dry and sprinkle with salt and pepper. Heat 2 tablespoons oil in a 12-inch heavy skillet over moderately high heat until hot but not smoking, then brown chicken, turning over once, about 6 minutes total, and transfer to a plate. Sauté onions, garlic, and bay leaves in fat remaining in skillet, stirring frequently, until onions are softened, 4 to 5 minutes. Add chorizo and paprika and cook, stirring, 1 minute. Add olives, raisins, wine, and broth and bring to a boil, stirring and scraping up any brown bits. Return chicken to skillet along with any juices accumulated on plate, then reduce heat to moderately low and simmer chicken, covered, turning over once, until tender, 25 to 30 minutes total.

Transfer chicken to a clean plate. (Sauce in skillet should be the consistency of heavy cream; if it's not, briskly simmer until slightly thickened, about 5 minutes.)**(See Kitchen Notes). When chicken is cool enough to handle, discard skin and bones and coarsely chop meat. Stir chicken into sauce and discard bay leaves. Season with salt and pepper, then cool filling, uncovered, about 30 minutes. 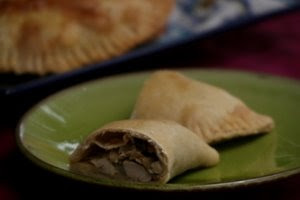 OK - so that was the filling for the chicken one. Here's the beef version:

Cook onion in olive oil in a heavy medium skillet over medium heat, stirring frequently, until softened. Add garlic, cumin, and oregano and cook, stirring, 1 minute. Stir in beef and cook until no longer pink, about 4 minutes.

Add raisins, olives, 1/2 teaspoon salt, 1/4 teaspoon pepper, and tomatoes with reserved juice, then cook, stirring occasionally, until liquid is reduced but mixture is still moist, about 5 minutes. Spread on a plate to cool.

Sift flour with salt into a large bowl and blend in butter with your fingertips or a pastry blender until mixture resembles coarse meal with some (roughly pea-size) butter lumps.

Beat together egg, water, and vinegar in a small bowl with a fork. Add to flour mixture, stirring with fork until just incorporated. (Mixture will look shaggy.)

Turn out mixture onto a lightly floured surface and gather together, then knead gently with heel of your hand once or twice, just enough to bring dough together. Form dough into a flat rectangle and chill, wrapped in plastic wrap, at least 1 hour.

Roll dough out on a floured surface until it is thin. Very thin is good. I used a bowl as a form and cut around it to form circles. Place the filling on 1/2 the dough, fold over to form a semicircle, then crimp with a fork. For the beef empanadas, I laid a couple of slices of egg, halved, over the top before folding. Brush the tops with a beaten egg, and using a toothpick, poke some holes for steam to escape. Put the empanadas on a cookie sheet and bake in a hot oven - 425 degrees - for around 16-20 minutes, depending upon their size and how crispy you like them.

Now, let me tell you that there was NO WAY that the consistency of the chicken empanada "sauce" was going to make it to heavy cream. So I skipped that idea altogether and just used a slotted spoon to remove all the goodies from the pan. I saved the sauce, however, because it's delicious! In fact, I've got lots of the mixture left over, and I'm going to add some of the sauce to it and serve it over rice.

Also, I have no idea how much shortening I used. I just kept cutting it in until it seemed "right". All I can say is that it rolled out beautifully and baked up light and fluffy.

And now, for Mary, who is not my mom but my friend, I offer this poem:

Tenderly she would take them down and fold
the arms in and fold again where my back
should go until she made a small
tight square of my chest, a knot of socks
where my feet blossomed into toes,
a stack of denim from the waist down,
my panties strictly packed into the size
of handkerchiefs on which no trace
of tears showed. All of me under control.

But there was tenderness, the careful matching
of arm to arm, the smoothing of wrinkles,
every button buttoned on the checkered blouse
I disobeyed in. There was sweet order
in those scented drawers, party dresses
perfect as pictures in the back of the closet—
until I put them on, breathing life back
into those abstract shapes of who I was
which she found so much easier to love.
Posted by Toni at 2:17 PM

Email ThisBlogThis!Share to TwitterShare to FacebookShare to Pinterest
Labels: empanadas

What a lovely birthday party for an (obviously) special lady. I think it's a real gift to have friends who are a lifetime older; one of my dearest friends is turning 87 in September, same age as my mother, but most definitely a friend. I love having her perspective in my life. Alas, she would have to eat the empanadas that aren't spicy, though I'd definitely go for the others.

A most special day. Totally understand it takes some thing really special to get this kind of yard work done! This was worthy. Magnificent empanadas, I so wish I'd had one (ok maybe several!!)

Lydia - I so agree with you that it's a gift to have friends from another generation. I think we lose a great deal when we segregate. And, like you, I am much more interested in the spicy ones than the others, but I had to make something that Mary could eat!

Tanna - Wish you had been here to have several!

I agree, it does take special occasions to get this kind of stuff done!

Mary sounds like a great friend indeed, Toni. And you are too, for hosting such a wonderful, warm event.

Jenn - Yes, I feel so lucky to live in a neighborhood peopled with such special friends.

Terry - This is the second time I've hosted her birthday party, and I confess I do use it as the push I need to get some yard work done!!

Toni, this is such a beautiful post! Your 'seasoned with years' neighbour Mary radiates the energy of a youngster!

(Birthday parties as an excuse to get some garden work done sounds genius to me!)