Duck a l'Orange and another hike 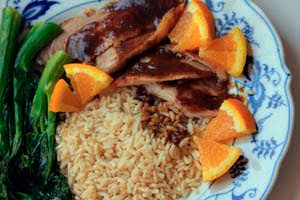 This is the perfect time of year for hiking in southern California. The heat of summer is gone, but the temperatures are still warm enough for a tee shirt. Besides, I am not good at languishing indoors. I am much better off when I move, getting my blood circulating. Especially on the weekend before Thanksgiving. It will take most of the day to fly to the east coast, and then I'll be with my family. We will be eating, and eating often. We will sit a lot. With any luck, we'll get a walk in. A walk. One. And that will be followed by a meal.

So now is the time to get out and move. And we have a park in San Diego called Mission Trails Regional Park which is an incredible resource. It's probably about 15-20 minutes from my house, and it has 4 mountains in it. I've hiked three of them. The landscape isn't lush - it's more desert chaparral, but depending upon where you enter the park, it can be beautifully quiet. 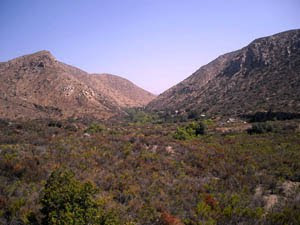 There are parts of the park which are dedicated to hikers, and parts which are shared with mountain bikers. We did pass several bikers, but only several of them. The rest of the time, we had the place to ourselves. I hiked with D and another friend K - an ex bicycle racer. He told us that he used to bike in the park up the side of one of the mountains until he had to lift his bike and carry it up to the top. To each his own. 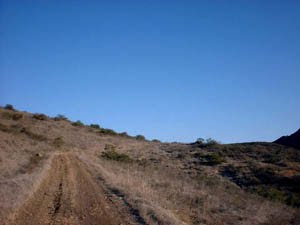 We went in on the south side of the park, crossed a small dam and hiked uphill. A long, steep hill. Then down the other side to a wash, where we headed north towards the trail which leads to both North and South Fortuna mountains. I knew I wasn't going to make it to the top today, so we looped back before we headed up the steep gravel strewn path. We had several more steep hills - both up and down, and by the time we got back to the car an hour and a half later, I'm sure we had a total of at least 600 feet of elevation changes. That might be an underestimate, but it certainly isn't an overestimate!

One of the good things about hiking for several hours is that it makes me hungry. And when I get hungry on a Sunday, I want to make food for the week. This week will be a short one, as I'm leaving on Tuesday, but I have room in the freezer. And I know that I will not be bringing home any leftovers from Thanksgiving. So I will not get to cook that week of turkey recipes -- the sandwiches made with cranberry sauce and the turkey curry and soup. So I decided that I would make a duck. I haven't had duck in years, I think, and I do love it. That coupled with the fact that I have a friend who just bought a house with orange trees made me decide on duck a l'orange - a tried and true standby.

My necessity for a rich, orange flavor led me to include several sources of it - including some triple sec. You can add any kind of extra kick which appeals to you - either in the form of a liqueur or orange extract or even marmalade.

Wash duck and pat dry. Make slits in the duck skin and poke a mixture of salt and pepper under the skin, as well as rubbing the outside with it. Chop onions and garlic and stuff the cavity of the duck with the mixture.

Place duck on a rack breast side down, splash a couple of tablespoons of Triple Sec over the top, then dot the top with butter and place in a 400 degree oven. Keep your baster handy, as you will be basting this bird often.

At this point you can do whatever other chores need to be done, but don't wander too far. You will need to keep basting the bird, and there will be plenty of fat to do so with. After 20 minutes, turn the bird over, baste again and roast for another 30 minutes. You will want to baste it about every 10 minutes.

Pull the bird out, making sure that all the juices from the cavity run back into the pan. Pour everything from the pan into a large measuring cup and stick it in the fridge. After a while, you'll be able to scrape the fat off the top. You won't be left with much, but that's OK - you can build your orange sauce from here.

Return what's left to the pan and turn on the heat to medium. Grab your whisk and start stirring......Keep stirring.....and when it gets real bubbly, you can add the apple and orange juice as well as the peel. Stir some more. If you notice it's particularly thin, as I did, you can add either cornstarch and water or flour and water - whichever you have on hand. Be sure to mix them together first before adding them to the pan, as this reduces the lumps. Taste and adjust the seasoning.

I heard a story on the NPR the other day about apple farmers in the northeast who are starting to make hard cider. They are trying to bring back a craft which was popular back in colonial times. Have any of you tasted any of this? I'd love to hear about it. I would imagine that this would be a meal which would go quite well with hard cider. As I didn't have any, I savored what I had - a nice Sangiovese. It worked.
Posted by Toni at 9:54 PM

Email ThisBlogThis!Share to TwitterShare to FacebookShare to Pinterest
Labels: duck a l'orange

Toni, thanks for commenting on my blog. It led me to your blog, and on to your web site. I have a lot of arthritic pain, especially in my hands, and other issues that you address on your site. So......thanks to your comment, I think I will call for an appointment with you! As for Talmadge, the show was great, sorry you missed it.

Arlene - I used to do pottery and currently do photography, so I'm naturally drawn to the arts and the artists.

Hi Toni
I have enjoyed reading your post. It made me wish I was living in California again! These hikes in the mountains (here in Dallas we get excited about a tiny hill) and the duck a l'orange to top it off! wonderful!

Hi T.O.B. - Thanks for stopping by my blog. I love Lebanese food, so I'll be visiting yours again. And again...and again!

boy do I like duck - this is great and what beautiful hikes you take!

Can you see me licking the sauce off of my duck? :)