Crab Chowder for a Rainy Day

Or should I say rainy week? It's not that I'd want to live in a place where it rains all the time, but I do love the rain we're having. I wish I had the time tomorrow to drive up to the Laguna Mountains to photograph in the snow. It seems to fall on the evenings where I have to go to work the next day. Most uncooperative! When I was up there last weekend, it looked like this: 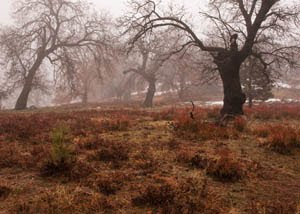 It was raining when I took that photo. I drove up hoping that when I got above 4,000 feet I'd find some snow. No such luck. The predictions are that the snow levels should be down around 3,000 feet this evening. The photo above was taken closer to 6,000 feet. I'd love to see the world blanketed in white, and have the sounds of traffic muffled by the snow. If it lasts until Thursday, maybe....just maybe....

But the canyons are green and the little seeds I've planted from those heirloom tomatoes I bought at the farmer's market are getting a good soaking. I'm excited about having tomatoes in my garden again this year. Meanwhile the chard is up and thriving, and I also planted radicchio for the first time. Why not? That's something that makes San Diego special -- all the things that grow here with barely a nudge from me.

I don't have a fireplace in my little house, but if I did, I'd certainly fire it up. These days are made for fireplaces and soups. I think when I was younger, I had this fantasy of being able to spend my winter days curled up in front of the fireplace with a good book, some classical music playing softly, and a bowl of hot soup on the table next to me. Well, I've got the classical music. I've even got an incredibly good book I've been reading -- "The Short Stories of Lydia Davis". She's a spare writer with an astonishing grasp of psychology. And now, thanks to a little "extra" time (what on earth is that supposed to mean?), I've got a rich, warming soup. 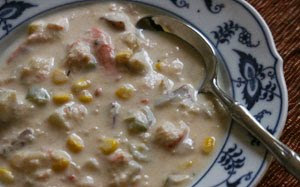 Chowders are wonderful repositories for this and that - the things you don't have a lot of but which add depth and complexity to a meal. I've made clam chowder before, and I thought of this as a variation on that theme. With some milk and fish stock as a base, you can pretty much add any of the standards of a good chowder. For me that included a couple of small potatoes I had gotten at the farmer's market - red ones that hadn't made it into another dish. I started with them, some onions, a couple of stalks of celery, a little garlic (of course!) and a red pepper, sliced and put into a pot to saute in butter before adding the stock and milk.

I'm usually conscious about the amount of fat I consume, but this rain and the cooler temperatures it brings has made me crave more of it than usual. So instead of using Earth Balance, I used real butter. Even added some cream to make it richer. Let's just say that when I decide to "sin", I don't mess around! I used canned crab meat, but if you've got the time and patience, you could use fresh, and you could combine different kinds of crab meat - snow and king are good choices. And because there was a little bit of corn left in that bag in the freezer, I threw it in as well. A pinch of salt, a dash of sugar and another dash of cayenne pepper brought the whole thing together.

The only part of the picture that doesn't match that fantasy? I have to work tomorrow. But fortunately I enjoy what I do! And I'll have some wonderful leftovers waiting for me at the end of the day.
Posted by Toni at 8:48 PM

I want a bowl of your crab chowder right now... hmmm i want that creamy, rich and mushy texture and yes with corn!
I hope you'll capture some snow over the weekend...
stay warm and dry!

Craving the white silence of snow? Come to Rhode Island; we're supposed to get a foot or more today! I'll even make you a pot of this delicious-looking chowder, and a fire in the fireplace.

Malou - I'd offer you one, but I finished it all!

Lydia - I'd be there in a heartbeat, but I suspect that all the flights have been canceled.

I do love a good chowder and here in Florida it is a chowder worthy day. I hope you find your snow. We are going to Key West soon to try and find the warmth we have been missing all Winter. By the way, sometimes butter is necessary!

Penny - I found my snow today! Tromped around in it for way longer than I realized, as I got a little turned around - but not enough to make a difference of more than a few dozen yards. Came back needing that butter and this chowder!

A lovely story and a beautiful soup, Toni. I too can get into rainy days that offer contemplative views like your photograph and invite cozy responses like making soup and curling up with a book.

Natashya - It definitely was perfect for the weather!

Terry - Even though we've never met in person, I can imagine you and Marion making a splendid soup. And you get enough weather in Chicago to warrant this kind of a meal quite often, I would imagine...

We have light snow falling here in france, and your chowder looks SO inviting right now!
And I'm very interested in that book you're reading...I'm going to look for it!
Keep warm and a happy V to you!
Ronelle

Your soup looks gorgeous! I love chowders and rainy days. We rarely get them here in the desert. When I lived in FL they were a daily event.

Ronelle - I miss having 4 real seasons. I love the variety of terrain here in San Diego county, but I grew up on the east coast, where we had snow in the winter and cozy, comfort foods.

I'd be curious to know what you think of the Lydia Davis book if you find it. If you don't let me know.

CBA - Ah, but the chowders you would have made in Florida probably had fresh fish in them. Now THAT is especially good!

Cynthia - I can't believe it! I would have thought that you could get almost anything that lived in the sea. But then again - some things prefer the colder waters, so I guess they wouldn't be local for you, either.

I had that same childhood dream, except in my dream I had hot tea, or cocoa. But I wouldn't mind a bowl of that chowder instead!

Jenn - Any time you come to visit, I'll make the chowder!