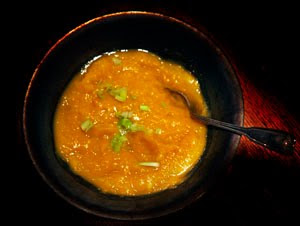 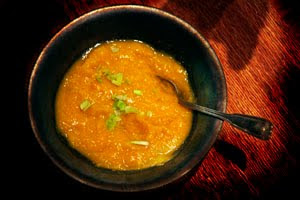 What's your favorite way to use pumpkin? I need ideas for Part II!!!
Posted by Toni at 4:55 PM

Pumpking Chocolate Chip cookies! Everytime I make them, my office gobbles them up.

I like pumpkin bread. And I like it with other roasted vegetables. I always mean to make something with it, but life doesn't provide much right now.

Sylvia - thanks for stopping by my blog, and welcome!

Pumpkin chocolate chip cookies? Would you send me your recipe? That sounds about as decadent as it gets, and I have to try it!!

Mimi - Yes, pumpkin bread! That sounds great! Do you have a recipe that you particularly love?

Toni, It is so funny that you made pumpkin soup. That is my next post. But unfortunately I did not have a pumpkin this year and am making it from canned pumpkin. Yours sounds so flavorful. I'm trying to think of other uses for your pumpkin. I love sweet potato biscuits. You could substitue pumpkin.

Thanks for the welcome! I'm really enjoying reading your blog too. You're right, we do have quite a bit in common. Would you mind if I added you to my "blogs I'm watching" on my blog?

Hi Penny - I'm sure I'd love your sweet potato biscuits. I think I'm a pretty lame biscuit maker, myself. Don't know why, but they turn out to have lead in them more often than not!

Sylvia - Not only do I not mind, but I'd welcome it! When I get the chance, I'll reciprocate.

Thanks for the link!!!

I'm a lover of pumkin soup too, especially butternut. Your soup looks so delicious...like the colours around us...autumn...nostalgia...pumpkin soup...
bisous
ronelle

Thanks for adding my blog to your site! I've added you to mine as well.

I can't wait to read your next posting.