Couscous and Garbanzos renewed, yet again 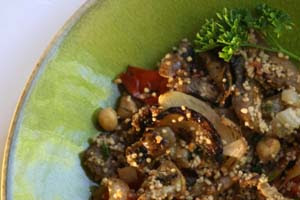 I had intended to publish several posts in the next 2 weeks containing dishes with an Asian flair, as this is the time of Chinese New Year. But somewhere in the back of my mind was this nagging thought: I was forgetting something. There was something I meant to do. What was it?

Then it hit me: OMG! It's time for the Legume Love Affair, hosted by the talented Susan over at The Well Seasoned Cook! I knew I was going to enter this event, as I'm a great fan of legumes, both from a gardening as well as an eating perspective. Legumes add nitrogen to the soil and fiber and nutrients galore to the body. They are among the most perfect of all foods. But all of that would be meaningless unless they tasted good. Because when it comes to food, it seems that all the health claims in the world will always take second place to taste.

So I've pushed the "pause" button on my Chinese New Year theme in order to post something with legumes. I had intended to make a lentil and celery root salad for this event, but the celery root went to two different slaws instead. Stay tuned - they will be posted! But in the meantime, in order to dash in under the wire for this event, I've decided to drag out an old post of mine, which originally appeared last June. It was two posts, actually. The first one had osso bucco. This next one is the direction I took with the leftovers. 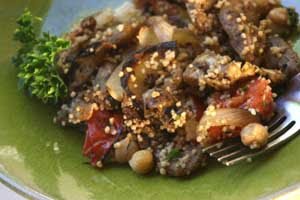 Ah, the osso bucco was delicious to the last bite. But that last bite was well before the end of the couscous and garbanzo mixture I made to go with it. And that lovely covered dish in the fridge just begged for a second chance. A new dress..........some new accessories............Well....you know what I mean. So I pulled it out, sat it on the counter and uncovered it for a while. We looked at each other, searching for a point of reference.

Perhaps it was the music I was listening to at that moment - Claudia Montes - a Spanish singer with a lyrical voice. I heard the Arabic influences in the music of Spain, and my mind wandered to that region of the world. Once there, it became obvious what my next step would be. I walked to Whole Foods and bought an eggplant, some tomato and a large yellow onion. Got home and fired up the grill. While it was heating up I peeled and sliced the eggplant, laid it out on a large dish and sprinkled some kosher salt on it. While the salt drew the juices out, I cut the onion in quarters, and sliced the tomatoes thickly. I then made an olive oil balsamic vinegar mixture and added a little ground black pepper and some more kosher salt. I patted the eggplant dry, poured the mixture over the veggies and headed out to the grill.

I find grilling veggies to be an exercise in focus. At least with my grill it is. It's an old grill and the flames aren't even -- one part gets a high flame and the rest is hit or miss. So I stand there, tongs in hand and spatula at the ready. I am constantly peering under the slices, watching them anxiously, waiting for that moment when they are toasty with those lovely grill lines across them, but not burnt. Flipping them over is a challenge, too, because I never know if they will slip through the grill and into the flame or actually land on the metal and stay there. I was lucky this time - only lost one tomato slice.

Headed in with my pile of grilled veggies. The couscous went into the micro, the cotes du rhone went into a glass, and when the grains were heated, I pulled them out, added the veggies, stirred, checked and corrected the seasonings and sat down to one of the best meals I had eaten in ages. I don't generally pat myself on the back in public, but folks, this one was a winner! Those grilled vegetables added a depth and complexity that even the osso bucco couldn't compete with. I lifted my glass and toasted the chef, and when I was done, I gave myself a standing ovation (much to my cat's disgust!) 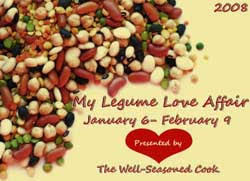 For health news, visit Mission Valley Acupuncture
For a place to share what natural remedies work for you and which don't, visit my other blog Second Opinion
Posted by Toni at 3:13 PM

Toni, your couscous and garbanzo beans--well, my take on it--is a favorite in my kitchen. And this sounds like a great take on it.

You said I'd read your mind with my most recent post on stew. Well, you've read mine here [I think]. Right now, I'm thinking next week's post will take an African turn--specifically, Moroccan.

Hmm, this sure looks delicious Toni:)
I should try Garbanzos in my couscous next time:)

Looks deelish! My salad for lunch this week is filled with them! :) Combined with couscous? Heaven! :) Looks great!

Now that's more like it....we love couscous and it's alot easier than rissotto (or how ever you spell the dam dish!).
That's a great idea to add the protein rich and meaty garbanzos too!

Terry - I loved your take on this recipe! I'm looking forward to being inspired by your Moroccan dish!

Chris - It's a wonderful combo - check out Terry B's post on it!

This looks great, I love gabanzos and couscous together - actually that combo is making an appearance on my dinner table tonight!

Jenn - You're the only one I've ever met who has ever heard of this combo. Isn't it scrumptious?

Sounds delicious! I've never tried this combo myself, but I'll certainly keep it in mind

I like your take on this though I've never made this combination. I love garbanzo and couscous individually. I'd be eager to try this out..

Mike - I think you'd love the combo. Also take a look at Terry B's version of it.

B - Yes, I love all the Goya products! I get them at a local market run by a Persian couple.