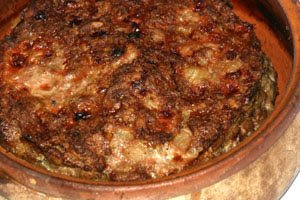 Global warming is getting to me. It's been hovering in the 80s here in San Diego. It's the middle of November already - what's it doing in the 80s, may I ask? Now, for some of you who are shivering with cold, that might seem like a terrific idea. But let me ask you this: What can you trust, if not the calendar? In the northern hemisphere, November is supposed to be cold. Or at least very crisp.

This weather has got to stop!!!!! I mean, here I am hanging Christmas lights in the pepper tree in my yard in weather which inspires people to think about hitting the beach. And next week is Thanksgiving! Whatever happened to "Over the river and through the woods, to grandmother's house we go! The horse knows the way, to carry the sleigh, through the white and drifting sno-ow"??? Hello? My patients have been coming in complaining of sinus problems due to the Santa Anas, and this heat has given force to the fires burning north of Los Angeles.

So you wouldn't think that this kind of weather would inspire anyone to turn on their oven. But that's exactly what I decided to do. This past weekend, I went to the local farmer's market and found THE most adorable baby squash! The weather said spring, the size of the squash said spring, but the calendar said November. I needed to roast something. Those squash had my name written all over them. Perhaps they brought out the teenage rebel in me, I don't know. But when I found the small white pumpkin in the next booth, I had no other choice. Here was an opportunity I don't get very often - a way to combine a fall pumpkin with spring squash.

So where does the meatloaf come in? Well, I was going to have dinner with some friends and their (almost) 3 year old son. I usually go to their house and bring something, and they usually do the cooking. Well, this time it was going to be baby Andrew and Dad only - and Dad thinks the kitchen is broken if the micro doesn't work. So I offered to bring the dinner. This is only part of the dinner.........the rest will be in the next post - promise!

Now, when I was growing up, my mom used 2 different words to describe meatloaf. If there was no tomato sauce on top, it was meatloaf. If there was, we called it skednick. Don't ask. It's a family thing. I guess it was a way of bring variety to our meals without having to cook something different. I love the word skednick, but I confess I've never made it. I guess I've outgrown the whole tomato thing on meatloaf. But that doesn't mean that you can't dump ketchup over this and call it skednick. Be my guest! For me, though, Lea and Perrins works better. Or making a mushroom sauce would work well, too, but I didn't have the time.

I bought a pound of ground beef, a pound of ground turkey, a pound of ground buffalo, and a half a pound of ground pork sausage. Dropped in an egg. I minced an onion and sauteed it in some canola oil. Meanwhile, I softened up about a cup of oatmeal in a cup of warm mushroom broth. When the onions were done, I dumped them into the meat with the oatmeal, ground some fresh pepper, sprinkled some kosher salt over it and began to play with my food. Mush and squish until it all came together. I had enough so that I could put part of it in a square glass baking dish, and the rest in my favorite little ceramic baking dish pictured above. Pop them both into a 350 degree oven for about an hour.

Now, if you're going to roast a pumpkin, it depends entirely on the size of your pumpkin as to how long you want to roast it. Keep an eye on it, and a sharp knife nearby. When you can pierce it, it's done. It should offer a little bit of resistance. That way you know you haven't created pumkin puree. The rest of the veggies (and yes, that included, in my case, tomatoes) go in closer to the end of the cooking cycle. Think in terms of 15 minutes or so. Some olive oil and a little kosher salt is all you need. When the veggies are this fresh, you don't want to overwhelm them with a sauce. Their freshness plays well against the meatlof which - with the use of oatmeal instead of breadcrumbs - has the consistency of a cloud. Seriously. 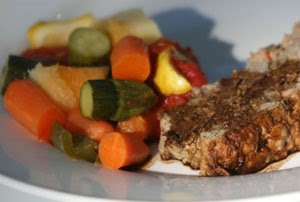 It is not usually very cold here in Florida this time of year but right now it is freezing! It is nice to be able to wear something other than shorts and flip flops.

I love meatloaf so. It's good in any weather! Ours is finally cooling off, after all autumn being in the mid-upper 60s (perfect to me).

Carol - I saw that on the weather this morning - brrrrrr!

Heather - I agree - it's good in any weather. I just don't love cooking it when it's meltdown hot!

I'm with simply gluten--my neck of the woods froze last night while I had the screen doors open a week ago. Ah Florida falls/winters!

As for that meatloaf--yum! That was one of my semi-secret favorite dishes growing up

Skednick?! Such a great word -- my family would love it! We are definitely from the no-ketchup school of meatloaf topping.

Mike - Yeah, I read about the crazy weather you guys are having in Florida!

Lydia - Don't you just love that word? My family is a word crazy bunch, and I'm grateful for that.

Meatloaf IS good at any weather... I'll find any excuse just to have it every night!

Jessie - Welcome, and thanks!

On my side of the pond, we are, on the contrary, fully enveloped in autumn: collars up, faces burned with wind. Under such arrangements, meatloafs get wolfed down in no time. It's almost winter overe here in Europe - with frost and such - after all! :)

Winter yes and fall, it's all about the cooler temps that I look forward to. Here to your rebellion bringing in the cooler weather there. The meatloaf looks grand and the roasted veggies even better!

Anya - Someday, maybe I'll get to visit your side of the world!

Toni, this is perfect for this time of year.

The 80s? Yikes. I'm not sure how I would feel about that. I do like the rare TG week when we are in the 60s though.

I hope winter comes soon for you...

Mimi - I'm not sure how I feel about it either. Actually, I am sure. I prefer Thanksgiving to be on the colder side.